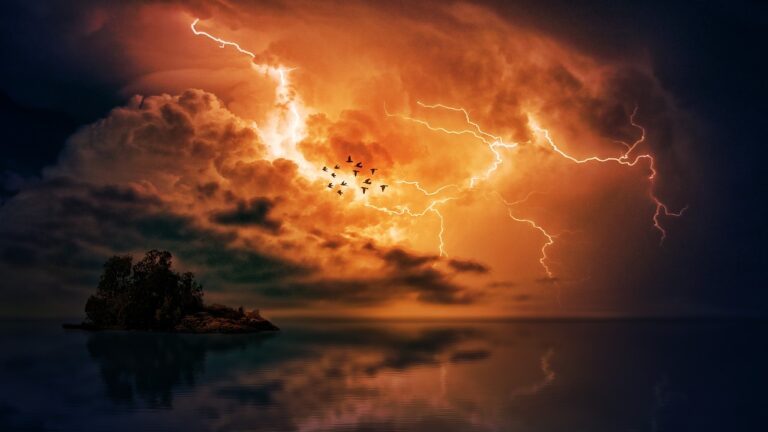 Scientists say they have solved a long-standing mystery: why lightning strikes over land are more frequent–and often stronger–than those over the sea.

Previous efforts zeroed in on the presence of fine water particles in the atmosphere that are capable of increasing lightning’s intensity. However, researchers now believe they have found a more dynamic and plausible reason for the disparity between lightning strikes over land and sea, which comes down to a fundamental aspect of seawater: salt.

The actual mechanism behind lightning is complex, but atmospheric scientists have more or less figured it out. Still, in places where lightning strikes are common, even laypersons have noted that the intensity and frequency of the lightning strikes increase as storms over the ocean approach land.

As noted, some of this disparity has to do with an increase in fine water droplets, but according to researchers, this is not nearly enough to explain the significant difference. This long-standing mystery motivated a group of researchers to search for an answer. And based on their published research, they have found it.

According to the research team’s study published in the journal Nature Communications, “the average lightning frequency for the same rainfall amount is generally far smaller over tropical ocean compared to land despite similar meteorology.” This disparity exists for the lightning’s intensity as well, an issue that researchers note has yet to be completely explained by current models.

“The known effects of thermodynamics and aerosols can well explain the thunderstorm activity over land,” they write in the study’s abstract, “but fail over oceans.”

To solve this mystery, the research team hypothesized that the presence of coarse salt particles in sea spray may be reducing the amount of charged water particles that could make it high enough into the clouds to instigate the formation of lightning. Next, they looked at lightning strikes from Africa and its adjacent oceans from 2013 to 2017. A total of 76,665 convective cases with lightning were obtained from January 2013 to December 2017, with 54,523 over land and 22,142 over the ocean.

Using conventional modeling methods and real-world measurements, the team’s analysis of this huge data pool seemed to confirm their hypothesis.

“Tracking the full lifecycle of tropical deep convective cloud clusters shows that adding fine aerosols significantly increases the lightning density for a given rainfall amount over both ocean and land,” they write, confirming the long-standing explanation for increased lightning intensity on both land and sea. “In contrast, adding coarse sea salt (dry radius > 1 μm), known as sea spray, weakens the cloud vigor and lightning by producing fewer but larger cloud drops, which accelerate warm rain at the expense of mixed-phase precipitation.”

In short, the added coarse salt from sea spray causes more rain droplets to form at a lower altitude, robbing the higher clouds of the fuel needed to create powerful strikes of lightning. In fact, the researchers point out that adding coarse sea spray can reduce the frequency of lightning strikes by as much as 90%.

“Previously, known differences in thermodynamics and aerosols could not explain much of the large excess in lightning activity over land compared to ocean for the same rainfall amount,” the study authors explain regarding their findings. “Herein, we resolved this question by quantifying the effects of both fine aerosols and coarse sea salt aerosols (CSS) on tropical DCC properties and lightning over ocean compared to over land.”

In their conclusion, the study authors note that their research “is the first time that coarse sea spray aerosols are documented to weaken DCC and suppress lightning.”

They further note that their study results appear to solve the long-standing mystery of lightning intensity and frequency over land versus water.

“These findings reconcile long outstanding questions about the differences between continental and marine thunderstorms,” they conclude, “and help to understand lightning and underlying aerosol-cloud-precipitation interaction mechanisms and their climatic effects.”