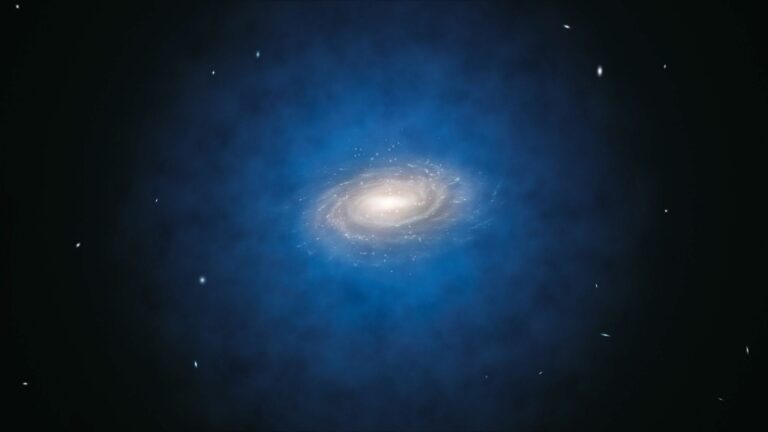 Life Not As We Know It: Probing the Nature of Dark Matter

Our scientific knowledge is spotty, like islands in an ocean of ignorance. The best visual illustration of this state of affairs is the “deep image” from the Webb Telescope, revealed in a public announcement at the White House on July 11, 2022.

The image shows a cluster of galaxies that lenses gravitationally the wallpaper of dwarf galaxies from up to 13.1 billion years ago. The starlight appears in the image as bright islands on a dark background. But the gravitational lensing effect is dominated by the dark ocean of matter surrounding the starlight. If this dark matter were luminous and ordinary matter were dark, the image would have been far brighter, looking like the sky on a sunny day, filled with light and peppered with tiny dark clouds. But Webb’s image is the opposite of that, telling us that what we know is less than what we have to learn.

It is a signature of human-centrism to presume that most of the interesting action in the Universe involves the minority of matter that we see, just because we are familiar with it from our Solar system. Such a bias echoes the mindset of an infant who imagines that there is nothing exciting outside home.

So far, all our attempts to produce dark matter in particle accelerators by smashing familiar particles with high energies at each other failed.  At the same time, the history of relativity and quantum mechanics suggests that nature is more imaginative than we are.

The simplest assumption to make is that dark matter particles do not scatter off each other, just as they do not scatter off ordinary matter. This assumption leads to tensions between theory and observations of dwarf galaxies. These are the building blocks of galaxies like our Milky Way, which was assembled out of millions of dwarf galaxies at early cosmic times. Observing these Lego pieces directly would allow us to probe the nature of dark matter.

The potential for discovery with the Webb Telescope is great, keeping in mind that its deep image was obtained with an exposure lasting half a day. Extending the exposure time to three weeks, as was done with Hubble’s eXtreme Deep Field, would allow the Webb Telescope to detect dwarf galaxies that are six times fainter than those seen in its preliminary deep image.

The challenges to the non-interacting dark matter could be alleviated if the dark matter is self-interacting with a cross-section per unit mass that is similar to familiar particles, like neutrons, with each other.

Self-interaction suggests a fascinating set of possibilities. What if dark matter is a mix of particles that interact strongly with each other but not with ordinary matter? The gravitational interaction by which dark matter is found through its effect on visible matter is unavoidable. According to Einstein’s theory of General Relativity, gravity represents the curvature of spacetime, shared by all forms of matter irrespective of whether they are visible or invisible to us.

Self-interaction allows for the possibility that there are “dark atoms” that emit “dark radiation” and condense into “dark stars” and “dark planets” that support “dark chemistry” that leads to “life-as-we-do-not-know-it.” In such a case, the answer to Fermi’s question: “where is everybody?” might be: “you are blind to most of them.”

Gravity would not help us notice the passage of asteroid-size objects made of dark matter near Earth, and bigger objects will never come close. The gravitational wave signal from a near-Earth passage of a dark matter object as massive as the Chicxulub impactor that killed the dinosaurs cannot be detected by our state-of-the-art LIGO-Virgo-KAGRA detector. Its passage through Earth could produce seismic noise but is unlikely to occur during the age of the Earth.

Ordinary matter makes up only a twentieth of the cosmic mass budget at the present time. Dark matter accounts for a quarter of it, and the rest is dark energy, another unknown constituent that powers the accelerated cosmic expansion.

If anyone out there is using dark matter or dark energy to fuel their spacecraft, we will see nothing coming out of their engine’s exhaust.

The scientific method is guided by data. Favoring evidence over prejudice has two manifestations, one practiced routinely and the other mostly ignored. The first manifestation uses the guillotine of data to eliminate possibilities that do not describe reality. The less practiced principle is to regard evidence that deviates from theoretical expectations as an opportunity to learn something new rather than as a threat to expertise that rests on past knowledge.

Four decades after Fritz Zwicky suggested in 1933 the existence of dark matter, a young Jerry Ostriker gave a colloquium about new evidence for dark matter at Zwicky’s home institution, Caltech, and was treated as an advocate for wild speculation by the audience. Today, young cosmologists are not even aware of the headwind that the concept of dark matter generated among traditional astronomers for half a century.

Here lies another aspect of the Copernican revolution. Not only are we not at the center of the cosmic stage and we came late to the stage, but we also do not represent most of the stuff that is presented on that stage. Until we figure out what this dark stuff is, we cannot claim to know what the cosmic play is about. The keys to our existence cannot be solely found under the lampposts which are visible in Webb’s image.

We know that the density perturbations that seeded our Milky Way galaxy would have been damped by scattering of ordinary matter on the cosmic microwave background if dark matter was not around to keep memory of their primordial origin. In effect, we owe our existence to an invisible actor.