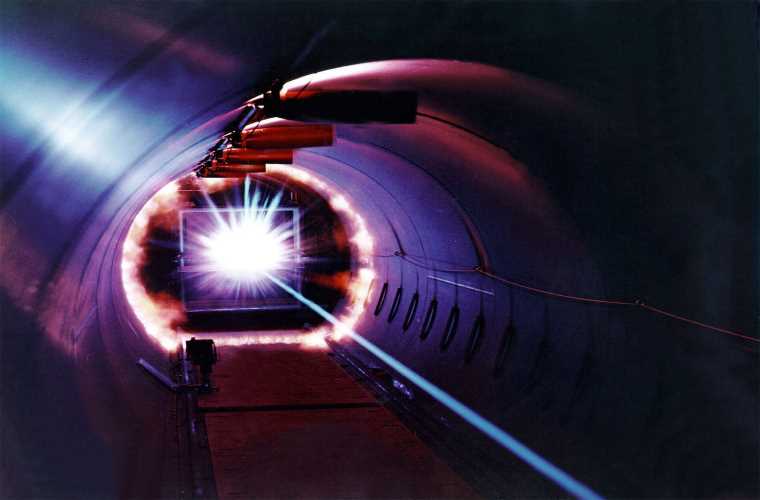 South Korean researchers have successfully transmitted electricity nearly 100 feet through the air using lasers. The first-of-its-kind wireless transmission is said to only be strong enough to power small, industrial sensors, but the researchers behind the unprecedented feat say they believe it can be scaled up to charge cell phones and other electronic devices. If successful, the new process could not only charge home and office devices but could be especially useful in hazardous environments that limit the use of most conventional wires.

“The ability to power devices wirelessly could eliminate the need to carry around power cables for our phones or tablets,” said the research team’s leader Jinyong Ha from Sejong University in South Korea. “It could also power various sensors such as those used for monitoring processes in manufacturing plants.”

While the first application is the most tantalizing to cell phone users who often find keeping their phone sufficiently charged to be a challenge, the second application is probably the most promising at this current phase. That’s because the research team sent a rather low-powered charge, around 400 milliwatts (mW) of electricity, which is hardly enough to charge a phone within any reasonable time frame.

However, many industrial facilities depend on a wide array of sensors that often must function in radioactive or otherwise hazardous environments. These dangerous environments limit the types of wires that can survive the elements to keep these sensors operating, whereas lasers can cut right through the air without suffering any loss of power, even in a nuclear plant or toxic chemical treatment facility.

“Using the laser charging system to replace power cords in factories could save on maintenance and replacement costs,” Ha explained. “This could be particularly useful in harsh environments where electrical connections can cause interference or pose a fire hazard.”

Of course, the everyday consumer is hoping that wireless charging, something that already exists in the marketplace through inductive charging, could one day mean that cell phones and other portable devices could be recharged quickly and without the use of bulky cords. Fortunately, the South Korean team says their system for sending electricity through the air using lasers should be scalable to meet the power demands of this type of charging in the near future. Plus, along with removing the need for wire chargers, their system doesn’t need to meet the precise engineering design parameters that inductive wireless charging systems require, which often limits their uses and distances to a few inches at best.

“While most other approaches require the receiving device to be in a special charging cradle or to be stationary,” said Ha, “distributed laser charging enables self-alignment without tracking processes as long as the transmitter and receiver are in the line of sight of each other.”

The team also points out that this type of design uses low-intensity infrared lasers, operating at around 1,550 nanometers. At that level, the electricity being transferred cannot damage the skin or the human eye even if someone accidentally walks in front of the beam. Speaking of which, the system can also avoid overuse of power or causing damage if the lasers are blocked.

“It also automatically shifts to a safe, low power delivery mode if an object or a person blocks the line of sight,” explained Ha.

With the results published in the journal Optics Express, the researchers acknowledge that their wireless electricity transmission system using infrared lasers is not yet ready for commercial applications. But given the small size of the receiver plate, which measures a paltry 0.4 by 0.4 inches, they say that once perfected, it could easily be mounted right onto a phone or other handheld electronic device.