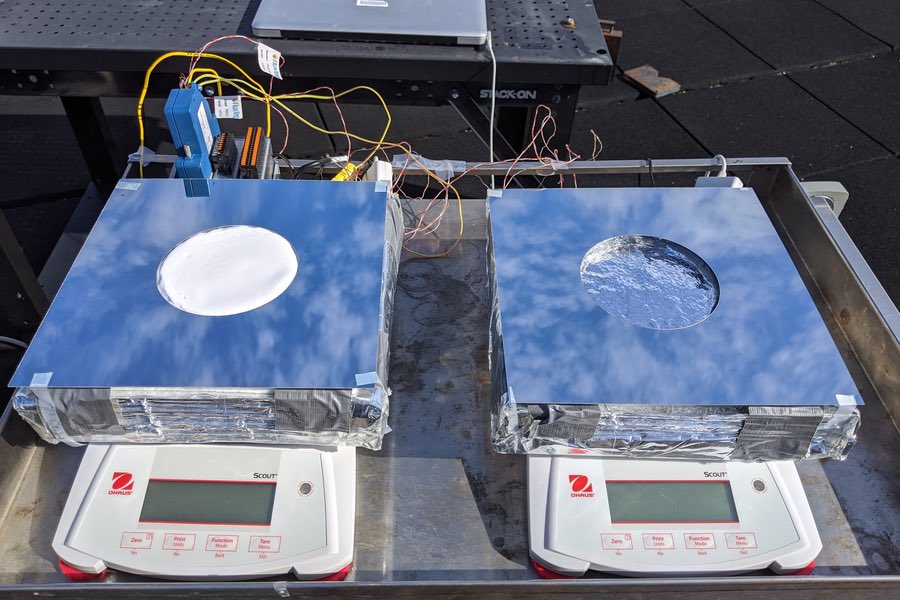 Imagine a system that’s able to provide cooling for air conditioning in buildings, refrigeration of food, and a host of other applications… all without electricity.

This may sound like science fiction, but thanks to the efforts of researchers at MIT, an innovative new passive cooling system could one day replace several conventional technologies, offering an alternative that requires no power input, and instead requires only a moderate amount of water to function.

By combining principles involving three separate approaches to cooling—radiative, evaporative, and cooling by thermal insulation—the team has developed a new technology that they say offers cooling by as much as 19 degrees Fahrenheit from ambient room temperatures. The system, which looks similar to existing solar paneling, could allow the safe storage of food under most conditions, and even triple preservation periods in extremely dry conditions.

Although each of the three cooling methods employed in the recent MIT research have shown success on their own, it was the team’s unique approach of combining them that produced the new passive, zero-energy technology.

“This technology combines some of the good features of previous technologies such as evaporative cooling and radiative cooling,” says MIT postdoc Zhengmao Lu, whose team published its findings in Cell Reports Physical Science. According to Lu, who was lead author of the paper, the combined technologies allowed for significant extensions of food preservation, even under conditions of high humidity that normally shortens the period in which they can be safely consumed.

In addition to its use as a standalone, zero-power technology for cooling systems, Lu believes that the new technology developed by he and his colleagues at MIT could also supplement existing cooling systems by reducing the amount of power required for their operation. One of the most obvious applications would involve cutting the amount of electricity required to power air conditioning systems in hotter climates.

“By lowering the condenser temperature, you can effectively increase the air conditioner efficiency,” Lu recently said in a statement, adding that such pairings of existing and newer technologies could “potentially save energy.” The same would apply in humid regions, Lu says, where even the best radiative cooling technologies often have trouble maintaining optimal performance.

The MIT team’s design relied on the construction of material in three layers which cool water and heat that pass through them. The top layer is an aerogel, which is a spongelike material composed of polyethylene filled with small, air-filled bubbles or cavities. One of the unique benefits of aerogels is that they allow water vapor to pass through, while still functioning as excellent insulators. They also allow for the passage of infrared radiation, which is vital to allowing the upward release of heat into the air, as opposed to the way radiative air conditioning systems release hot air as a result of the power required to operate them.

“The key here is to have one material that can generate IR emission and evaporation for heat removal,” Lu told The Debrief in an email. “On top of it, we have a porous insulation material that lets vapor and IR go through while blocking heating from the ambient and the sunlight. In this way, evaporative cooling, radiative cooling, and thermal insulation can work together synergistically.”

The second layer, a hydrogel, is similar to the aerogel layer above it, although its cavities are filled with water that facilitates the evaporation needed for cooling. Lastly, a third layer featuring a reflective surface helps to prevent sunlight that may pass through the first two layers from being absorbed, reflecting it back up into the aerogel and hydrogel layers above it instead.

Although no power would be required, water would be required in moderate amounts—perhaps as little as twice a week—for evaporation to occur in particularly dry regions. Wetter areas may require even less maintenance, with water only being added once a month in most cases.

According to Lu, bringing all three approaches to cooling together into a single, innovative passive cooling system was recognized by the ream as being a truly novel approach. Even in early testing phases involving small versions of the new combined technology in a rooftop area at MIT, the team managed to demonstrate capabilities that amounted to almost 19 degrees of cooling.

Skyscrapers in 2100: Award Winning Architect and Visionary Vanessa Keith Peeks into the Future.

The team believes this new technology could one day help supply cooling system in many parts of the world where electricity, water, and other resources are extremely scarce. However, Lu says some additional testing will be required to truly gauge how the new technology might perform under various kinds of climates and weather conditions.

“We don’t anticipate additional challenges​,” Lu told The Debrief regarding how the technology would function under severe weather involving high temperatures. “However, we don’t have data on how the cooling structure would perform in the case of extremely heavy rainfall or wind.”

“Likely, significantly more engineering and research are needed to address this.”

Update, 9/23/22: This article was updated to feature additional quotes provided to The Debrief by lead author Zhengmao Lu.