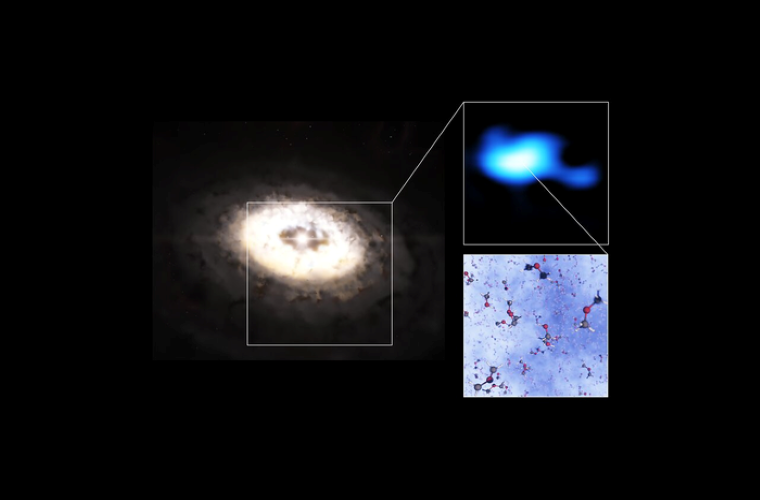 Astronomers have detected the complex organic molecules dimethyl ether and methyl formate within a star’s planetary-forming disc. Described by researchers as “a precursor of larger organic molecules that can lead to the emergence of life,” the discovery should help guide astronomers and astrobiologists looking for signs of extraterrestrial life.

ORGANIC MOLECULES ARE THE BUILDING BLOCKS OF LIFE

For researchers searching for signs of life outside of Earth, such organic molecules may serve as a trail of breadcrumbs leading to the planetary systems most likely to house such life. Now, a team of astronomers using the European Southern Observatory’s Atacama Large Millimeter/submillimeter Array (ALMA) in Chile say they have spotted these chemical precursors to life in the planetary disc around star IRS 48 for the first time.

TRAIL OF ORGANIC MOLECULES MAY LEAD TO ORIGINS OF LIFE

“It is really exciting to finally detect these larger molecules in discs,” said one of the study’s co-authors Alice Booth, a researcher at Leiden Observatory, in a press release announcing the discovery. “For a while we thought it might not be possible to observe them.”

That’s because organic chemicals that form within star-forming clouds do so within ice particles, making them impossible to detect at interstellar distances. In the case of IRS 48, which is 444 light-years from Earth, heat energy seems to have freed some of these organic chemicals from their icy prisons, allowing astronomers to spot them.

“What makes this even more exciting is that we now know these larger complex molecules are available to feed forming planets in the disc,” explained Booth. “This was not known before as in most systems these molecules are hidden in the ice.”

The detection is not only the first of its kind, but according to the researchers behind the discovery, it should help inform the search for extraterrestrial life throughout the galaxy.

“From these results, we can learn more about the origin of life on our planet and therefore get a better idea of the potential for life in other planetary systems,” said Nashanty Brunken, a Master’s student at Leiden University Observatory and lead author of the study. “It is very exciting to see how these findings fit into the bigger picture.”

UNDERSTANDING THE ORIGINS OF LIFE IN OUR SOLAR SYSTEM

Published in the journal Astronomy & Astrophysics, the new research is helping astronomers put together an increasingly complete picture of the potentially cosmic origins of life, including life on Earth.

“We are incredibly pleased that we can now start to follow the entire journey of these complex molecules from the clouds that form stars, to planet-forming discs, and to comets,” said Nienke van der Marel, a Leiden Observatory researcher who also participated in the study. “Hopefully with more observations we can get a step closer to understanding the origin of prebiotic molecules in our own Solar System.”