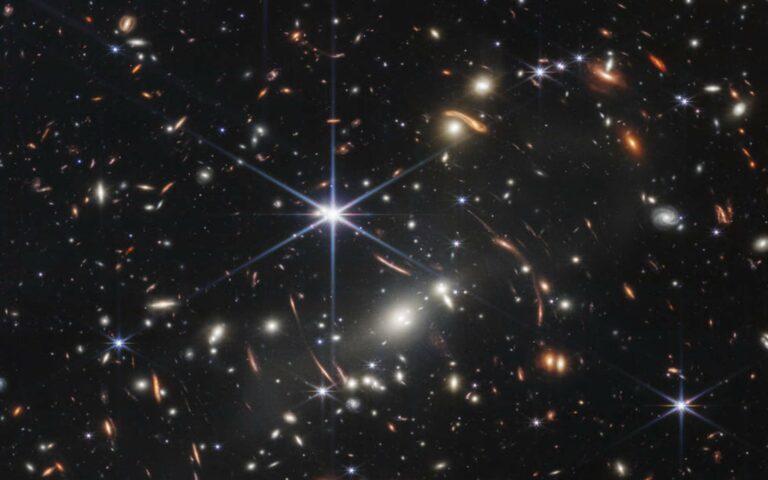 Cosmic Origins: When Did the First Stars Form?

The Universe had been expanding for 13.8 billion years. But in the first few minutes, it was hotter and denser than the core of the Sun. We know it from the observed abundances of light elements, such as deuterium, helium, and lithium, that were cooked out of a soup of protons, neutrons, and electrons at these early moments. Stars could not have existed so early because the extreme heat would have dispersed them. Hence, the question: When did the first stars form?

The scientific details of “Let there be light” are at the focus of the Webb telescope. I was fortunate to take part in the first scientific advisory board that designed this telescope with the primary motivation of imaging the first stars and galaxies. The telescope was built to capture the infrared wavelengths of starlight that were stretched by a redshift factor of 10-20 as a result of the cosmic expansion, extending our view of the infant universe. This enabled the “deep image” of the cosmos that was released in a dedicated White House event, hosted by President Biden and vice-President Harris on July 11, 2022. The image shows numerous red arcs around a cluster of galaxies.

NASA-administrator Nelson noted, “Mr. President, we’re looking back more than 13 billion years”, an unusual statement in DC where plans are made on a timescale of four years. The image resulted from a long Webb exposure for half a day, but future exposures could last weeks, probing fainter galaxies at greater distances. By now, half a dozen new papers reported about galaxies with possible redshifts as high as 16 in Webb’s data.

When did the first stars and galaxies form? This was the title of an undergraduate-level book I wrote in 2010, followed by an advanced textbook two years later. Based on the standard cosmological model, we expect the very first stars to have emerged about a hundred million years after the Big Bang. They formed inside small gas clouds, a millionth the mass of the Milky-Way galaxy, which condensed from seed inhomogeneities in the early universe.

Thanks to the finite speed of light we can observe how the universe appeared at early times by looking far away. The first image we have of the Universe, shows the imprint of the initial density perturbations that seeded the first galaxies. The image shows slight brightness fluctuations, at a level of one part in a hundred thousand, in the cosmic microwave background. This first snapshot is from 400,000 years after the Big Bang, when the universe cooled below a few thousand degrees, so that free electrons and protons were cold enough to make hydrogen atoms. Scattering by the fog of free electrons made the Universe opaque to light at earlier times.

A hundred million years later, dense regions condensed as a result of their self-gravity, which reversed their initial expansion and collapsed them into the first dwarf galaxies. From our vantage point, these first galaxies are challenging to observe, not only because of their great distance from us but also because they are fainter sources of light than present-day galaxies like the Milky Way.

The earliest galaxies were composed of dark matter and a primordial abundance of mostly hydrogen and helium, but almost no heavy elements. Under these circumstances, the gas was unable to cool efficiently and so it fragmented into stars that are ten to hundreds of times more massive than the Sun. The most massive stars had a surface temperature of order a hundred thousand degrees, emitting copious amounts of ultraviolet radiation that broke surrounding cosmic hydrogen into its constituent electrons and protons. This process, called reionization, restored the cosmic hydrogen back to the ionized state that characterized it in the first 400,000 years after the Big Bang. But because the universe expanded by a factor of about a hundred since that time, it was a million times more rarefied and hence transparent. Hence, the Webb telescope can look through it to observe the first stars.

During the epoch of reionization, bubbles of ionized hydrogen grew around concentrations of galaxies and eventually overlapped within a billion years to fill the entire cosmic volume. We can map the growth of these bubbles using the faint transition of cosmic hydrogen in radio waves with a wavelength of 21-centimeter. Several low-frequency observatories are currently searching for the “Swiss Cheese” structure of the redshifted 21-cm radiation.  Since additional stars and black holes formed over time, the intergalactic hydrogen remained ionized until the present time.

When did the first life form? The habitable Universe is the subject of a review paper I wrote 2014 and my latest textbook.  Life could have started as soon as the second generation of stars formed out of the ashes left from the first stars. The cores of the massive early stars were so hot that they produced electron-positron pairs once they consumed their nuclear fuel, and then exploded as powerful “pair-instability supernovae” – the only explosions that were fully understood from first principles for nearly six decades. The explosions spewed heavy elements from stellar guts into interstellar space. First life could have blossomed on the surface of planets that formed out of these heavy elements, less than a billion years after the Big Bang.

If sentient beings existed back then, they would have marveled at bright stars appearing and exploding like cosmic fireworks, in celebration of the birth of life in the young cosmos. The Sun was late to the party, forming 8-9 billion years later. And out of the debris left over from the formation of the Sun condensed a rock we now call Earth, on which a group of people built the Webb telescope that could seek evidence for what happened before.

We must never forget that the cosmic play started long before we came on stage. This should also encourage a bit of humility: the great cosmic play is not one written about us!