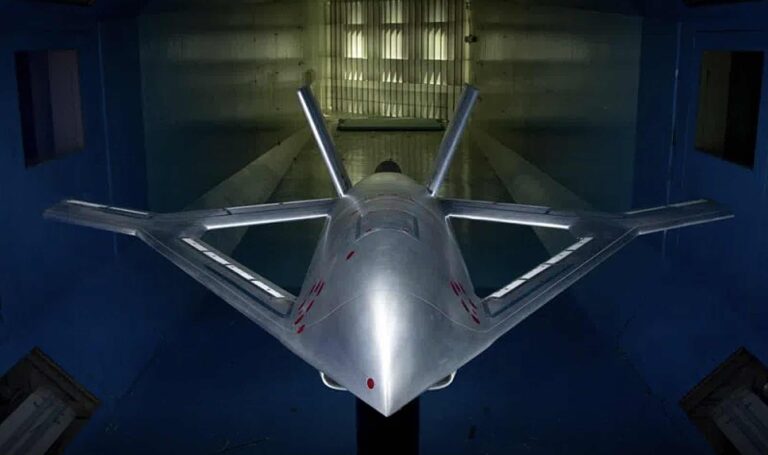 If successful, the new X-plane could completely change the way high-speed aircraft fly by combining the simplicity and stability of AFC to improve overall reliability and performance while offering a lower radar cross-section.

In conventional fixed-wing aircraft, steering and altitude control are accomplished via moving control surfaces like ailerons, flaps, and tail rudders. Some highly advanced military aircraft employ thrust vectoring to aid in steering and maneuverability. However, even those revolutionary designs still use conventional control surfaces for the majority of in-flight maneuvering.

More recently, DARPA has begun testing and evaluating active AFC systems to eliminate traditional flaps and other controls and replace them with specialized effectors and actuators. These systems typically work by altering the aircraft’s aerodynamic flow via the manipulation of mechanical actuators, effectively morphing the shape of the wing, or by the ejection or suction of pressurized air on a wing, fuselage, inlet, or nozzle. These novel components are intended to greatly reduce or even eliminate the moving parts required in traditional control surfaces to improve an aircraft’s overall function and reliability while simultaneously reducing its radar cross-section.

Now, DARPA has tasked Aurora with finishing the final design of a full-sized, fully functional X-plane that employs their successfully tested AFC, with the long-term goal of the company building and flying an actual AFC-equipped X-plane.

According to recent reports, the actual configuration of the new X-plane is expected to consist of a wide array of different wing sweeps that contain pressurized air nozzles positioned across the upper surface of the wing. Manipulation of the suction and/or release of pressurized air via these nozzles alters the flow of air over the wing, effectively doing the job ailerons and flaps usually accomplish.

The design is also expected to be modular, so different AFC systems can be added or removed during the testing process. This includes Aurora’s own AFCs, as well as AFCs from other sources. For example, both Lockheed-Martin and BAE Systems are also working on the CRANE program for DARPA.

Finally, Aurora designers are hoping to land on a wingspan of 30 ft. and a gross weight of approximately 7,000 lbs.

“Leveraging Boeing’s targeted investments in active flow control, our advancements on the CRANE program aim to further validate the technology’s potential benefits to improve efficiency and performance for both commercial and military aircraft,” explained Laurette Lahey, the senior director of Boeing Research and Technology in May of 2022.

During that Phase 1, Aurora successfully tested a 25% scale model of a new X-plane that combined 11 moveable conventional control surfaces with 14 AFC banks containing eight fully independent, controllable air supply channels. These systems use reshaping of the wing as well as air injection effectors to manipulate the flow of the air as it goes over the wing, resulting in a whole new way to steer high-speed aircraft.

The success of the Phase 1 testing program, which lasted over four weeks at a wind tunnel facility in San Diego, California, resulted in this new Phase 2 funding from DARPA. This phase will ask Aurora to design a full-sized X-plane to prove the viability of AFC technologies.

The DARPA-funded Aurora effort began back in 2021 with an initial Phase 0 research and design effort, which then led to the funding and successful tests of Phase 1.

“Together with DARPA, we can enable fundamentally new approaches to aircraft design and look forward to exploring game-changing configurations,” said Aurora President and CEO Per Beith at the time of the Phase 0 award.

Depending on the successes and challenges Aurora encounters during Phase 2, the new award has an executable option for Phase 3. That effort would see the Boeing-owned DARPA contractor actually build a fully-sized AFC X-plane and fly it.

Until then, the Aurora team looks to take on Phase 2 by building on the tests ad successes of the previous phase. Graham Drozeski, vice president of government programs at Aurora, emphasized this point, noting that the knowledge from previous phases and a (hopefully) successful Phase 2 are the natural steps to flying an AFC-controlled, high-speed CRANE X-plane.

“The CRANE X-plane is designed specifically to explore the effectiveness of AFC technologies at mission-relevant scale and Mach numbers,” said Drozeski. “Given all that we have learned about AFC and its application to tactical aircraft in prior phases of CRANE, the next step is to prove out these learnings in flight.”

If all goes to plan, those first flights will take place in 2025.