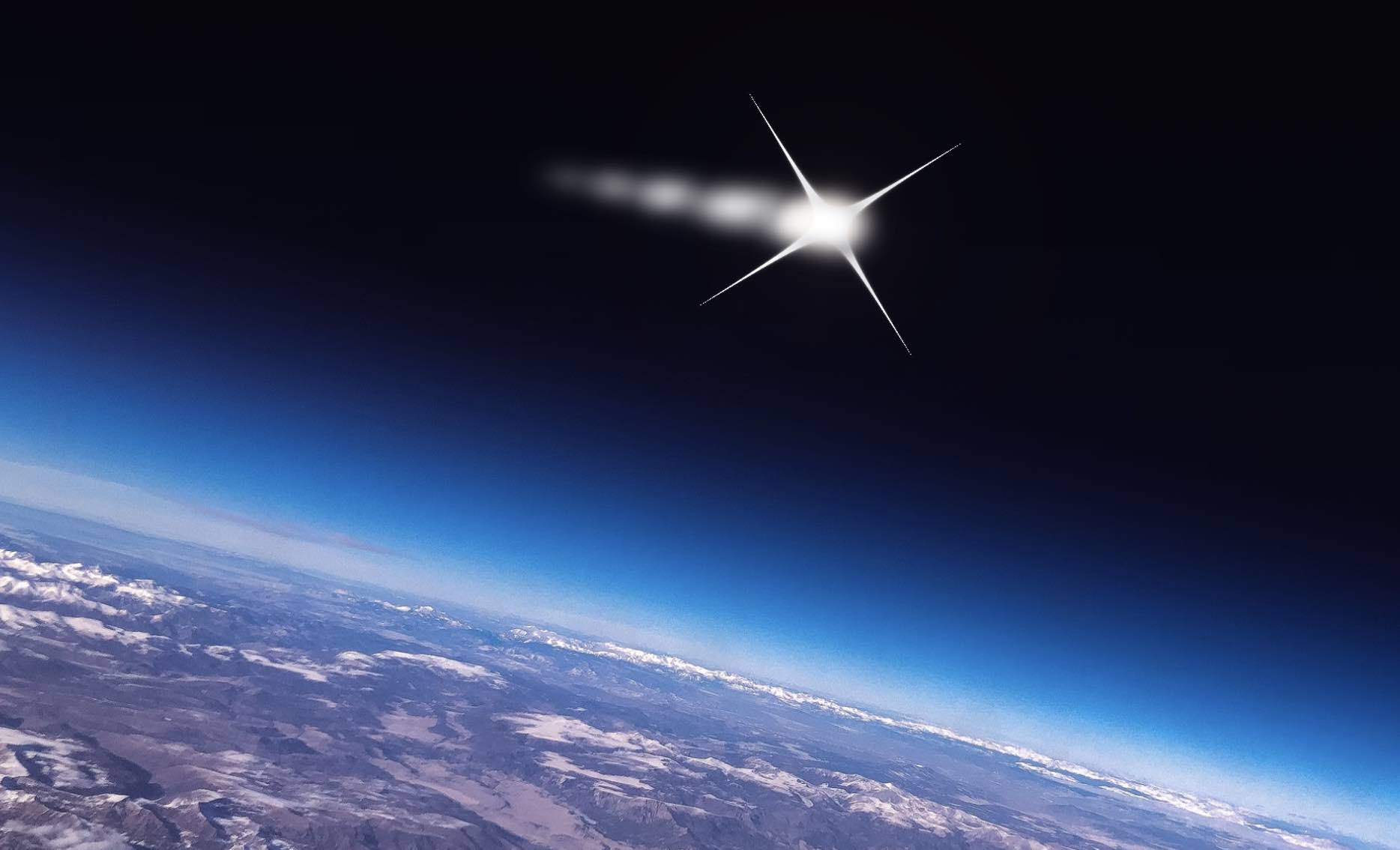 During the summer of 1954, the United States Air Force was on high alert. A pair of mysterious objects had been located in orbit between 400 and 600 miles from Earth, and now officials were in a state of confusion as to what they might represent. Could they be non-terrestrial objects of natural origin, or could they be something else entirely?

A more concerning possibility also lurked in the minds of officials at the time: what if the objects were manmade, and possibly of Soviet origin?

Dr. Lincoln La Paz, then the head of the Extra-Terrestrial Bodies Institute at the University of New Mexico, had been in constant communication with the Air Force about their unusual new problem. For weeks, he shot back and forth between the Palomar Observatory in California and the missile test center at White Sands, New Mexico, until it was finally determined by the astronomer that the objects were indeed natural: they were only meteors.

The story received tremendous attention after it first appeared in Aviation Week, and just days later, a source close to the Army Office of Ordnance Research assured the New York Times that no satellites deemed to be of artificial origin had been detected yet, adding about La Paz’s meteors that “there was absolutely no connection between the reported satellites and flying saucer reports.”

The search for objects in Earth’s orbit had been virgin territory in 1954, and the events in the fall of that year were only a foreshadowing of the kind of public fear yet to come. Once the Soviets actually did launch Sputnik 1 from the Baikonur Cosmodrome in the early days of October 1957, concerns about a technological gap among Western nations escalated into a full-blown crisis.

The world would never be the same. In the aftermath of the “Sputnik crisis,” the United States accelerated its space-bound efforts, eventually placing its own satellites into orbit, followed by successful manned space missions and, eventually, humans landing on the Moon in July 1969. Today, on any clear night one can look at the night sky and see tiny points of light moving silently along in their positions in orbit, representing objects that range from satellites and the International Space Station, to tiny reflective bits of debris from past space missions that have accumulated in Earth’s orbit steadily over time.

In addition to the satellites we have placed into orbit around our own planet, humans have also sent several spacecraft to further locales, some of which we have positioned around nearby planets like Mars. It seems logical to assume that if there were any intelligent extraterrestrials out there, they might do the same.

This brings to mind an interesting question for modern astronomers: what if aliens have surveilled our planet, either in the past, or even in the present day? If so, how might we detect evidence of their technologies?

With the amount of debris that clutters the space around our planet today, it would prove difficult to locate any prospective alien probes that may be watching us. Based on current European Space Agency data, there are 5,800 functioning satellites in orbit, with nearly 31,590 debris objects that have been logged and continuously tracked by Space Surveillance Networks.

However, not all objects in orbit around our planet are being tracked. According to current statistical models, smaller space objects between 1 mm and 10 cm could number greater than 131 million.

In short, the orbital area around our planet has become a very cluttered place since the dawn of the Space Age, making it increasingly difficult to search for any possible outliers that might represent evidence of non-terrestrial technological artifacts that might be observing our planet.

That’s why one group of researchers, led by Beatriz Villarroel of the Nordic Institute of Theoretical Physics and Stockholm University, has undertaken a citizen science effort to search for evidence of such non-terrestrial artifacts in what some might consider an unusual place: data that has already been publicly available for decades.

Prior to the launch of manmade satellites like Sputnik 1 in the late 1950s, Earth’s skies were free of the clutter that hinders modern searches for prospective non-terrestrial objects. According to Villarroel and her team, one way to overcome this problem is by scanning earlier photographic plate projects such as the First Palomar Sky Survey (POSS-1), which is the focus of the Vanishing & Appearing Sources during a Century of Observations (VASCO) project.

“We expect the project to yield many interesting findings over time,” reads a statement on the website of the VASCO Network, “maybe even some anomalous objects and events — could aliens be responsible for any of those?”

In the May issue of Acta Astronautica, Villarroel and several colleagues published a paper, “A glint in the eye: Photographic plate archive searches for non-terrestrial artefacts,” which elaborates on how potentially anomalous non-terrestrial objects might be located.

“We show that even the small pieces of reflective debris in orbit around the Earth can be identified through searches for multiple transients in old photographic plate material exposed before the launch of the first human satellite in 1957,” the researchers state in the paper’s abstract. According to Villarroel and her coauthors, images depicting what they identify as “simultaneous transients” may hold the key to detecting evidence of non-terrestrial artifacts that may have been lurking in Earth’s orbit since the days prior to Sputnik.

“About 80% of the very fast bright flashes (glints) in our sky are the result of artificial objects with highly reflective, flat surfaces,” Villarroel recently told The Debrief. These objects, many of them relatively small according to Villarroel, may be found in geosynchronous orbit around the Earth.

“A fast glint like this will look like a star in an image,” Villarroel says, “and sometimes one can see several glints from the same object in an image (or from different ones). Space debris and satellites in geosynchronous orbits can leave multiple glints in an image.

“Multiple glints in sky images is, therefore, a typical signature of artificial objects,” Villarroel says. By looking at some of the earliest photographic plates collected by 20th-century astronomers, the VASCO team thinks they could easily discern the presence of any reflective objects in geosynchronous orbits (GEO) since they would appear as short lines in these photographs, the length of which can be used as an indicator of their speed and position in orbit (satellites at higher GEO altitudes produce fast, transient glints that result from the light they reflect from the Sun).

Of particular interest to Villarroel and her colleagues are the appearances of multiple glints, which may indicate a single object tumbling through space producing a series of flashes as its surfaces reflect sunlight, or possibly even the presence of several objects.

“We propose to look for multiple glints in image data before Sputnik I,” Villarroel told The Debrief. “If such signatures are found in a time when there were no high-altitude satellites, that could imply the presence of Non-Terrestrial Artifacts (NTAs) in orbits around the Earth.”

Although surveying photographic data from pre-satellite times offers obvious benefits to the search for non-terrestrial artifacts, there are challenges for modern researchers using this approach, since multiple glints in older sky survey imagery could be accounted for by a number of other things. These could include defects in the images that produce the appearance of star-like objects which, in fact, may simply be photographic artifacts.

“If one finds multiple glints in an image, we cannot know for sure that the observation is real as some defects might possibly look star-like,” Villarroel says. “And it is difficult to access the original photographic plates to examine the ‘stars’ under a microscope.”

One simple way that Villarroel and her colleagues have proposed to help narrow down any likely anomalies is to search or instances where they appear in a single line.

“The main proposal of the paper is, therefore, to look for an even clearer signature, which is to search for these multiple glints-events that on top of everything, also are aligned along a line,” Villarroel told The Debrief. Unlike plate defects, which could most often be expected to appear randomly across the image, Villarroel says that genuine glints of light detected by cameras, possibly produced by debris or satellites of unknown origin, would produce consistent glints of light along a line in an image.

Villarroel says there are several sources of imagery that astronomers can use for such surveys, many of which are freely available. However, an added benefit of conducting multiple surveys could be that the presence of any anomalies detected in one photographic plate collection, if thereafter found in a separate set of images, could help confirm the presence of a genuine anomaly.

“Many observatories have their photographic plate collections,” Villarroel says. “Finding similar examples of ‘multiple transients’ in other image data sets could help to confirm the effect. Also, we have predicted some shapes and glinting patterns in our recent preprint that one can use to search for the predicted objects in modern datasets.”

Along with her efforts with the Vasco Network, Villarroel is a research team member of The Galileo Project, a scientific effort led by astronomer Avi Loeb aimed at detecting extraterrestrial technological signatures produced by Extraterrestrial Technological Civilizations (ETCs).

“The Galileo project is excellently suited for these searches,” Villarroel told The Debrief.

With decades of imagery now in hand, modern advances in computer imaging and artificial intelligence could prove to be instrumental in helping astronomers make a breakthrough in the search for extraterrestrial intelligence. Considering some of the early observations by Lincoln La Paz and other astronomers at the dawn of the Space Age, it would indeed be ironic if it were ever proven that evidence of extraterrestrial technologies had been lurking much closer to home than most would have ever expected.

When asked about some of the intriguing observations that preceded the earliest launch of artificial satellites in 1957, Villarroel says cases from decades ago might indeed be worthy of renewed attention from modern astronomers, especially if the current efforts to analyze photographic plate collections ever turns up anything odd.

“These historical examples would be very interesting for us to look at through the VASCO glasses,” Villarroel says.