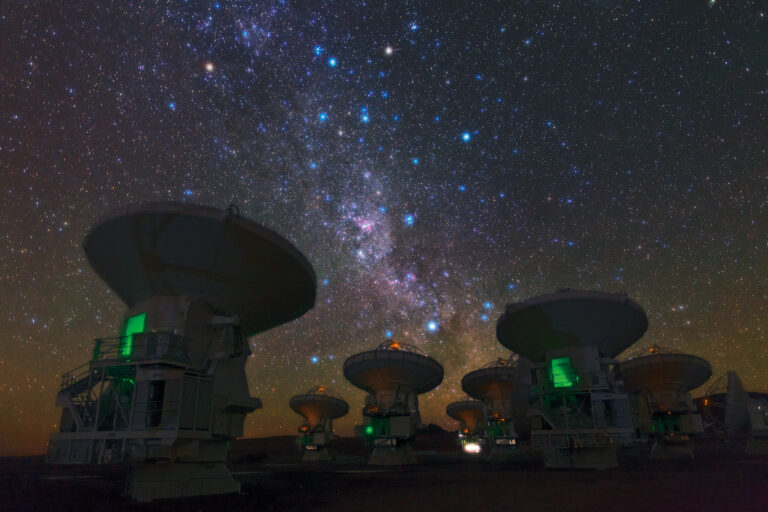 Technosignatures of Intelligent Aliens Could Be “Lurking” Nearby, Study Says


A group of researchers propose searching for "unusual signatures or phenomena" on the Moon, and even around Earth.

With the ever-quickening pace of modern space exploration, humankind’s aspirations to explore other worlds–and possibly even find evidence of extraterrestrial life–have seen a number of upgrades. NASA’s Mars rover Perseverance is currently equipped with the most advanced astrobiology lab humans have ever sent to another planet, and while the nuclear-powered robot carries out its mission to search for possible signs of life, astronomers here on Earth are employing new technologies to peer across space at potentially habitable worlds, in search of the technosignatures of intelligent civilizations.

The search for technosignatures–detectable evidence of technologies produced by intelligent life on other worlds–has seen rising interest in the last few years by scientists, as well as members of Congress. Now, a recent NASA-funded study has just proposed a number of new ways that evidence of such civilizations might be detected in the years ahead.

The paper, which appeared in the journal Acta Astronautica, proposes several novel ideas about where scientists might search for evidence of intelligent extraterrestrials, not all of which involve life on planets far distant from Earth. In fact, the team of scientists has proposed that some of the most fruitful places humans could be looking for evidence of alien life may be far closer to home.

“New and unique opportunities now exist to look for technosignatures (TS) beyond traditional SETI radio searches,” according to the study’s authors, which they say has been driven “by tremendous advances in exoplanet science and observing capabilities in recent years.” Such advances, the researchers say, may be of special significance to government space agencies like NASA, as well as private commercial space endeavors that have become increasingly active in recent years.

“We put forward a set of possible mission concepts designed to search for [technosignatures], although the data supplied by such missions would also benefit other areas of astrophysics,” the team’s study says.

Among the missions outlined in the study, the researchers propose a search for evidence of impact sites or other artifacts that might be present on the Moon, which might have resulted from intelligent probes or other extraterrestrial flotsam and jetsam that might have made its way there over the course of the last several millions, or even billions of years.

Could it even be possible to search for such potential technosignatures on or around the moon with high-resolution imagery we already have on hand?

“It is certainly possible,” says Dr. Ravi Kopparapu, a research scientist at NASA Goddard Space Flight Center and one of the study’s coauthors. However, Kopparapu told The Debrief that maybe we shouldn’t limit the search for unusual technologies or other phenomena to the lunar surface.

“I would even say to look at the near-Earth orbit for any anomalous signature that appears at odds with our expectation or doesn’t fit the known data,” Kopparapu told The Debrief in an email. “Just like we are sending probes (like Voyager and pioneer spacecrafts) beyond our solar system, it is quite possible that other technological civilizations will do the same.”

“We are not unique in that sense,” he added.

In 2012, Kopparapu and his colleague Jacob Haqq-Misra coauthored a paper which explored this idea, where they argued that various kinds of extraterrestrial technology could already exist here in our Solar System. As they said in the 2012 paper, “the vastness of space, combined with our limited searches to date, implies that any remote unpiloted exploratory probes of extraterrestrial origin would likely remain unnoticed.”

“I think looking around our Earth’s surroundings (including the Moon) is very worthwhile to see if we find any unusual signatures or phenomena,” Kopparapu told The Debrief.

Another of the missions the team outlined in the recent Acta Astronautica paper involves searching for what they term “lurkers,” which involve prospective technologies that might be hidden on natural space objects like asteroids. Kopparapu thinks radio searches might be one way such “lurkers” could be detected, proposing that future searches might try reflecting radio signals off of asteroids, or even listening to see if any discernible transmissions are emanating from them.

“Maybe albedo differences (reflected light from the surfaces of objects on asteroids and see if they are consistent with the light reflected from the asteroid itself) is another method,” Kopparapu told The Debrief. However, in addition to technologies hidden on asteroids, the team also suggests the potential that such “lurkers” might actually be disguised as natural objects.

Kopparapu proposes monitoring asteroids to see if there are any deviations in their velocities, although he thinks it “will be hard to distinguish which one is a natural asteroid and which one is not.”

The study also includes more conventional approaches in its proposed missions in search of technosignatures, which include searching for evidence of pollution around more distant exoplanets, detection of possible Dyson spheres, the placement of a radio telescope on the far side of the Moon, all-sky searches for laser beam emissions, and focused studies of future interstellar visitors similar to the mysterious ‘Oumuamua.

Perhaps most importantly, the researchers say that existing data that is already available to scientists should be examined for possible technosignatures. Similar ideas have been proposed in the past, which propose the use of searchable image collections obtained throughout the last several decades of space studies, as well as databases and other information which “all offer low-cost opportunities to seek a footprint of extraterrestrial technology.”

Looking Ahead: Technosignatures and the Future

Of course, even the best of what we have available today may not compare to new technologies that could aid with the detection of technosignatures in the years ahead.

Kopparapu says it all depends on “what is available now and what facilities will be available in the near future.”

“Essentially, what kind of detection methods and telescopes are upcoming that we can use, other than radio searches, to look for technosignatures on other planets? We have James Webb Space Telescope (JWST) to be launched in this year that could look at the atmospheres of exoplanets. We also have next generation space telescope mission concept studies like LUVOIR, HabEX and OST that look at the atmospheres of exoplanets to find signs of life.”

“We could use the same telescopes for identifying technosignatures in the atmospheres of distant worlds,” Kopparapu says, noting that while the years ahead may afford us some exciting, and even a few unforeseen opportunities, our most productive searches will be reliant on what we can probably already expect to have within the next few years.

“So the question of what are the most promising methods boils down to what are we going to have access to in the near-term,” Kopparapu told The Debrief. “And because the above-mentioned telescopes are the ones we will have access to, it makes sense to use those to look for technosignatures.”

However, a few of the more “traditional” technologies that have been employed in the search for extraterrestrial intelligence over the years shouldn’t fall to the wayside.

“If we do detect a radio signal that is confirmed to be not-natural, and not-from Earth, then things get interesting.”

The study, “Concepts for future missions to search for technosignatures” by authors Hector Socas-Navarro, Ravi Kopparapu, et al, appeared in the May 2021 issue of Acta Astronautica.