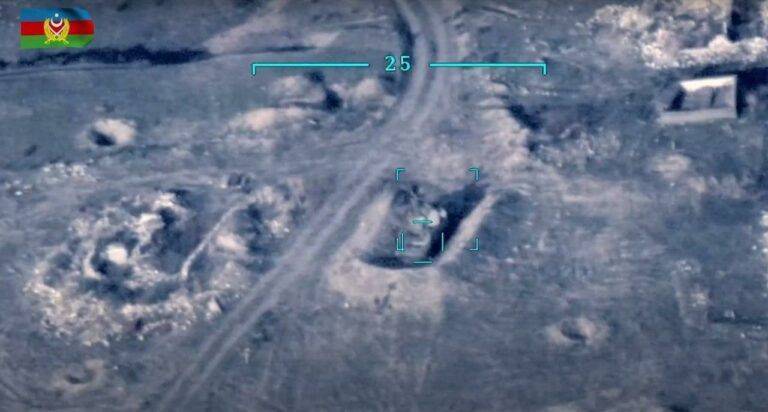 Lethal Drones Won’t Transform Warfare But They Will Transform Terrorism


Rogue Actors and the Future Threat of Lethal UAVs.

Lethal drones have become a mainstay of military arsenals worldwide over the last decade. World powers and smaller nations have been pouring significant resources into purchasing unmanned aerial vehicles, or UAVs, for defense purposes. Many believe that UAVs will reshape the overall nature of warfare itself, but experts are far more concerned that this technology will be truly transformative when placed into the hands of non-state actors and terrorists.

The last several weeks have seen the conflict in the Nagorno-Karabakh region de-escalate as Armenia and Azerbaijan have entered into a Russian and Turkish brokered ceasefire. While the political situation is messy and far from resolved, the armed conflict saw an increased rise in UAVs’ use as weapons, especially a specific type of drone called a “suicide drone.”

“Suicide drones” are generally known as loitering munitions. Loitering munitions were first developed in the mid-1980s as an airborne defense against surface-to-air missiles. In 1988, the U.S. began developing the AGM-136 Tacit Rainbow, a loitering munition that could be used as a UAV, cruise missile, or even a standoff weapon.

Tacit Rainbow was ultimately canceled for lack of progress in 1991. Development of loitering munitions outside the U.S., however, continued and now these cost effective drones are available in both, long and short-range formats.

Today, such as in the recent conflict over the Nagorno-Karabakh region, loitering munitions are a cross between a missile and a combat drone. These explosive UAVs acquire targets either autonomously or semi-autonomously with a “man-in-the-middle,” track the target, and when ready, strike the target. The drones can essentially “loiter” in the sky for significant periods of time and give ground units eyes over a battlefield. If a valuable target is spotted, the drone itself will slam into the target. Depending on the model, size, and type of loitering munition, they can be launched from naval vessels, aircraft, or ground vehicles. New models, such as the AeroVironment Switchblade, can be deployed at the troop level and can easily fit in a soldier’s rucksack.

The situation in the Nagorno-Karabakh seemed to indicate that loitering munitions are useful in small regional conflicts where air defenses may be limited. While Armenia and Azerbaijan both have established military capabilities, Azerbaijan’s use of drones was significantly greater than that of Armenia. Though lethal drones did not tip the balance of the conflict, Azerbaijan was able to use the high definition drone footage in various propaganda campaigns to establish, at least visually, that they were dominating the battlefield. Footage of drones destroying Armenian troop transports and tanks populated different social media platforms. Though it was clear that Azerbaijan held a significant arsenal of Israeli made Skystriker, Orbiter 1K, and Harop “suicide drones,” it was the military support the country received from Turkey which seems to have tipped the balance and the lack of support its enemy received from its ally Russia. In the battles fought, lethal drones were not the kingmaker, nor were they totally transformative from a tactical or strategic perspective.

International Defense experts Lynn Davis and Michael McNerney confirm that lethal drones, in reality, are not that transformative. Drones, like any airborne object, are susceptible to air defenses. In other words, they are easy to shoot down if you have the right weapons. Even with all the propaganda from Azerbaijan, over two dozen drones were shot down by Armenian forces.

“In a U.S.-China confrontation, current armed UAV systems would be shot down in moments. If Iran tried to use an armed UAV to target Saudi Arabia, it would be unlikely to succeed because of sophisticated Saudi air defenses,” Davis and McNerney explained in a Rand Report on armed drones. “Using long-range armed drones against targets in Syria is succeeding because Syria’s air defenses have not been employed.” Smaller nations may not be able to repel lethal drone attacks because they lack the defense hardware to shoot them down. However, even if drones were not in play, those nations would fall victim to a more dominant military force from a world power if an all-out armed conflict broke out.

That being said, using advanced lethal drones against undefended targets does not guarantee victory.

“Armed drones are more transformative against insurgent movements or others that lack even basic air defenses. In these cases, the greater precision and loiter time of armed drones, as well as lower cost, can change the battlefield in favor of the counterinsurgent by enabling targeting that would otherwise be too risky or too costly,” Davis and McNerney explain. “The United States has not, however, gained victory over the Taliban despite using Predator and Reaper drones on a regular basis.”

A study published by Bard College indicates that, as of March 2020, 102 countries have active military drone programs. Many nations are continuously spending more of their defense budgets on drone technology. As nations continue to develop and purchase armed drones, UAV technology will become cheaper, and, as with most weapons, they begin to trickle down to non-state actors and terror groups. When The Debrief reached out to Israel Aerospace Industries, the makers of the Harpy Loitering Munition, often considered the first “suicide drone” ever built and sold, their spokesperson explained that it is a matter of policy never to disclose who buyers are nor how much they pay for their products.

Weapons manufacturers will typically deny selling their hardware to non-state groups. However, this has not stopped non-state groups from getting their hands on armed UAV hardware. Hezbollah used an armed drone to destroy an Al-Nusra Front headquarters in 2014 and posted a video of the attack online. While it is unknown if the drone used was a loitering munition or a conventional armed drone with a mounted weapon, it is clear that the group acquired its UAVs from Iran. In May of 2019, Yemen’s Houthi rebels used seven armed drones to attack and damage oil pipelines in Saudi Arabia. In 2020, Houthi rebels fired several missiles and used attack drones to strike various Saudi targets. In Nigeria, Boko Haram has been using attack drones to strike military and civilian targets. Famously, in 2018, Venezuela’s president, Nicolás Maduro, was nearly killed by two drones that detonated above his podium while giving a public speech.

Access to lethal drone technology seems to be a matter of friendship and alliances. Larger non-state groups, such as Hezbollah, can acquire military-grade UAVs from their allies, such as Iran, or have the economic wherewithal to purchase them from suppliers. Other groups, such as the Taliban, and other smaller terror cells, aren’t as lucky.

“Even if interested in armed drones, it is not likely that terrorists would be able to develop more than a limited capacity to use them effectively,” Davis and McNerney state. Small terror groups will continue to develop and use more straightforward means to attack targets, such as IEDs and suicide vests. That being said, the Taliban has been dabbling in the UAV arena by converting private and commercial drones into flying IEDs. Moreover, as this technology continues to develop, it will become easier to use and cheaper, possibly allowing smaller terror groups access to military-grade drones.

The consensus seems to be that UAVs are precision weapons that reduce collateral damage and civilian deaths. Perhaps, in the hands of state powers who choose to follow the conventions and rules of warfare, that is the case. However, for non-state actors, there is little indication that only military targets are viable targets. While international law concerning warfare undoubtedly morally and ethically applies to non-state groups, they typically exist in areas with little government oversight, control, or enforcement. Moreover, national governments have used non-state groups to handle regional conflicts on their behalf, circumventing their moral and legal obligations and passing those obligations off to groups that do not follow them. When placed into the hands of non-state actors, the inherent risk with lethal UAV systems is access to weaponry that, when used against non-military targets, will inflict significantly more damage than conventional means. The actual transformative nature of weaponized military drones appears to only occur in the hands of non-state groups.

The battles of tomorrow have yet to be fought, but “suicide drones” will clearly continue to be developed, sold and purchased by militaries around the world. UAV technology will become more prevalent than it is today, and as that happens, our focus should be on those nonstate groups and terrorist organizations that will be waiting in the wings to get their hands on these lethal weapons. While counter-measures will be built to try and stop these weapons from hitting their intended targets, the real effort should be put towards controlling their sale to nonstate actors, and deeply examining and attempting to effectively stop nation states from handing this technology over to those who shrug off their moral obligations.