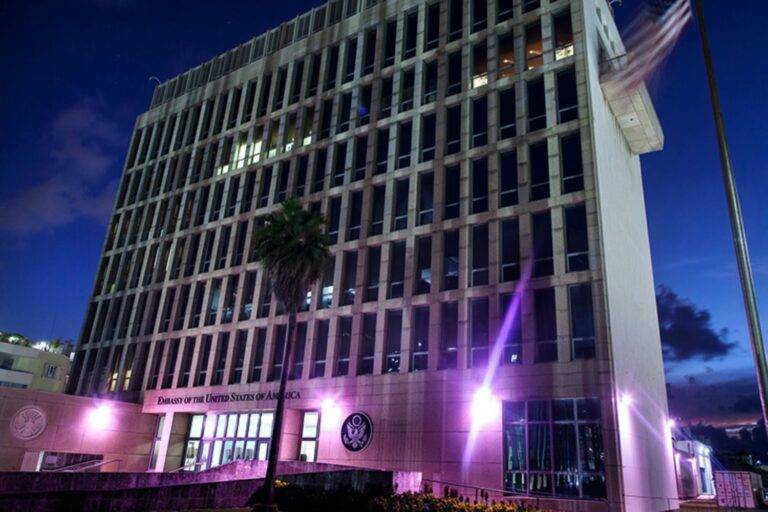 The Havana Embassy, site of the initial reports of incidents linked to the possible use of directed microwaves agains U.S. personnel (Public Domain).

Directed Microwave Radiation Cited as Likely Cause Behind Diplomat Illnesses


Mysterious illnesses that occurred at U.S. Embassies in Cuba and China may have been pulsed microwave weapons, a new study says.

Directed microwave radiation has been determined as a likely cause behind mysterious illnesses reported by Department of State (DOS) employees in Cuba and China beginning in late 2016, according to a National Academy of Sciences committee report.

The study, released on Saturday, concludes that dizziness, cognitive conditions, and other unusual symptoms the employees described were best explained as the result of exposure to pulsed radio frequencies, which occurred at the embassies where they were stationed.

Numerous studies have looked at the possible cause of the reported illnesses, of which some of the results are classified or restricted for other reasons related to national security. “Thus,” the recent report states, “the committee had only limited amounts and kinds of information,” but nonetheless “arrived at a number of observations and recommendations” based on their review of the available data.

Some of the patients the study examined only experienced what were termed “nonspecific, chronic signs and symptoms,” which were interpreted as being the possible result of “multiple causes or mechanisms” experienced on a patient-for-patient basis.

No conclusions were made as to the source of the directed microwave energy in the report, which also did not specifically class the incidents as “attacks.” However, The report does cite well-known research carried out by the Soviet Union involving directed microwave radiation, and its possible use in such ways.

Several U.S. and Canadian diplomats who served at the U.S. Embassy in Cuba between late 2016 and early 2018 were among those affected. Also affected were Canadian diplomats and others at the U.S. consulate located in Guangzhou, China, early the following year. Currently, more than two dozen U.S. officials are believed to have been affected.

The recent National Academy of Science committee’s findings contrasts sharply with some of the past studies that have looked at the incidents. One study suggested that the presence of a neurotoxin might account for some of the symptoms, possibly resulting from chemicals used in Cuba as fumigation against mosquitos around the time the initial cases began to occur in late 2016.

The following February, Michael Hoffer, an otolaryngologist with the University of Miami in Florida, discovered that some of the patients appeared to have suffered inner-ear damage. Shortly afterward, then-U.S. Ambassador to Cuba Jeffrey DeLaurentis discussed the possible use of long-range acoustic devices during classified briefings on the incidents. By August 2017, then-Secretary of State Rex Tillerson had stated publicly that “health attacks” had been undertaken against the victims of the Havana incidents.

However, not everyone in the medical community had been convinced of the existence of a physical cause behind the illnesses. A Cuban scientific panel concluded in December 2017 that “psychological stress” could account for the symptoms; the following month the FBI also concluded there had been no evidence of sonic weapons or other devices in association with the incidents at the U.S. embassy in Havana.

The National Academy of Sciences committee that produced the recent report cited a number of concerns following their investigation. Among these had been “grave concerns about a world with disinhibited malevolent actors and new tools for causing harm to others,” as well as the potential for similar future cases, and the U.S. government’s ability to respond to them quickly and effectively.

“It is imperative that the United States recognize and quickly respond to future cases with a well-coordinated, multi-disciplinary, science-based investigation and effective interventions,” wrote David A. Relman, who is Chair of the committee that investigated the illnesses.