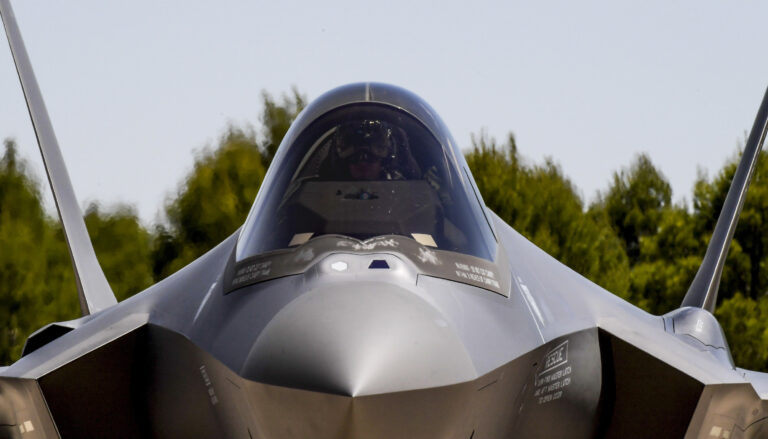 Jazz Shaw·March 1, 2021
AerospaceTech
Advancements in safety software installed onboard military fighter jets have led to systems that are being credited with saving the lives of nearly one dozen fighter pilots and preventing the loss of their aircraft in recent years.
A challenge encountered by fighter pilots maneuvering increasingly powerful planes capable of accelerating to Mach 2 and beyond is avoiding blacking out at the controls. While a relatively infrequent occurrence, it does happen, particularly during training missions. The current generation of F-16 Fighting Falcons and F-35 Lightning IIs has been receiving upgrades to AI-driven software that detects impending ground collisions if a pilot blacks out, taking over control of the aircraft and returning it to a safe heading. This is an admirable advancement in terms of safety, but ironically, the technology driving this software may, before very long, largely eliminate the need for the very pilots it was designed to save.

When pilots experience too much gravitational force during high-speed maneuvers they can succumb to a condition known as G-induced loss of consciousness, or G-LOC. This is characterized by a tendency for the pilot’s blood to flow toward their extremities and away from their brains, which may result in fainting. There are exercises pilots practice to prevent this from happening and modern flight suits are designed to mitigate the effect as well, but both have their limits.
Just last year, two F-16 pilots flying over a test range in Nevada experienced G-LOC events, losing consciousness. In both instances, an onboard system took over control of the planes, righted them in a stable flight configuration and prevented the planes from impacting the ground. A safety review after each incident concluded that both planes would almost certainly have crashed had the software not intervened.
The software that saved the pilots and planes was developed by Lockheed Martin, the same company that manufactures both the F-16 and the F-35. It’s named the Automatic Ground Collision Avoidance System, or AGCAS. The technology is not installed in all combat aircraft yet, but will likely eventually be ubiquitous among our fleets of fighter craft.

ANALYSIS: IS OUR TECHNOLOGY OUTGROWING THE NEED FOR PILOTS?

While the fighter pilots in our combat aircraft are safer today, they’re not nearly as safe as a new generation of pilots who are currently fighting alongside them but doing it from the other side of the world. New generations of Unmanned Aeriel Vehicles (UAVs), commonly referred to as drones, have been increasingly taking on combat duties traditionally handled by human pilots. Some of the most popular with many militaries around the world are the General Atomics Aeronautical Systems Inc (GA-ASI) MQ-9 series Reapers and SeaGuardians, among others.
These UAVs can be piloted in real-time by pilots stationed inside of control centers located in Nevada and on other military bases far from the battlefield. When conditions require it, artificial intelligence systems can take over and complete missions, using AI systems even more complex and durable than the AGCAS software currently saving the lives of pilots.
The range of missions that can be executed by these UAVs has gone well beyond simply arming them with cannons and smart bombs to take out specific targets. One class of MQ-9s was recently approved for conducting autonomous anti-submarine warfare (ASW) operations for the Navy, demonstrating the ability to deploy sonobuoys into the ocean and sending target data back to its pilot in Nevada. More recently, the Northrop Grumman RQ-4 Global Hawk has been taking on logistics and intelligence duty missions, once the province of planes like the U-2.

The reality is that aircraft have been evolving and getting “smarter” along with many other avenues of technology, from nearly the moment of their inception. In a 2019 research paperpublished in the journal Defence Studies, Dr. Arash Heydarian Pashakhanlou noted that barely a decade after the Wright Brothers’ famous flight at Kittyhawk, the first autopilot had been developed, capable of keeping a plane at a steady altitude, course, and speed. In the 21st century, the author notes, the autopilot systems in commercial airliners are actually better and more reliable than the humans in the cockpit. Some of the newer versions are actually more reliable for landings and takeoffs, not just maintaining course once the craft reaches cruising altitude.
Obviously, the challenges of flying a fighter jet in combat far exceed those arising in a normal commercial flight between two United States hubs. But that doesn’t mean that the challenges are beyond the reach of current automated piloting systems, assuming the machines haven’t already surpassed the master. Particularly when you consider that the most complicated UAV are still being directly controlled by human pilots at a distance with some AI thrown in as a backstop, human pilots in a craft’s cockpit may already be largely redundant in the latest generations of warfighting aircraft.
Compounding the problem is the fact that the military is facing recurring shortages of pilots. Training a military pilot and putting them into service is a time-consuming and expensive process. But many of them leave the military after their minimum term of service is up, taking lucrative jobs in the commercial sector. This has very likely been one of the factors driving the push to advance the technology of pilotless aircraft.

Perhaps the question we should be asking ourselves now is not one of when the technology will reach a point where human pilots are no longer needed onboard. We appear to already be there, or we will be when enough of the latest generation of aircraft can be put into service. The real question is what’s holding us back. For the majority of most commercial flights these days, the human pilots in the cockpit are mostly there as passengers except during takeoff and landing unless something anomalous takes place in mid-flight. The technology is already with us and should only continue to improve.
The other advantages to UAVs, particularly for the military, should be obvious even to the layman. Removing people from a warfighting aircraft means you can also remove all of the support systems that serve no purpose other than to keep the human(s) alive. There is no need for ejection seats – or any seats for that matter – or pressurization and oxygen to keep them breathing. Windows, always a weak point in the airframe’s design, are no longer needed since the remote pilot “sees” the environment through sensors. And if one of these drones does go down, you don’t have to send someone to present a flag at the funeral of the pilot.
Recent advances in aviation technology, particularly in the military, have been stunning. Whether for use in peace or wartime, we may be in the process of relegating human pilots to small, leisure-craft or flying extremely complex emergency rescue operations. That would likely be very hard for some of us to wrap our heads around and adjust to. There’s always been something both romantic and heroic about fighter pilots, the brave men and women who take to the skies and risk their lives to move people and freight along with fighting our wars.
Who would remember the day in 1918 when Captain Roy Brown shot down Baron Manfred von Richthofen during World War I if both vehicles were being operated by some kid with a keyboard 10,000 miles away? Indeed, this is the brave new world we are continuing to plunge towards.