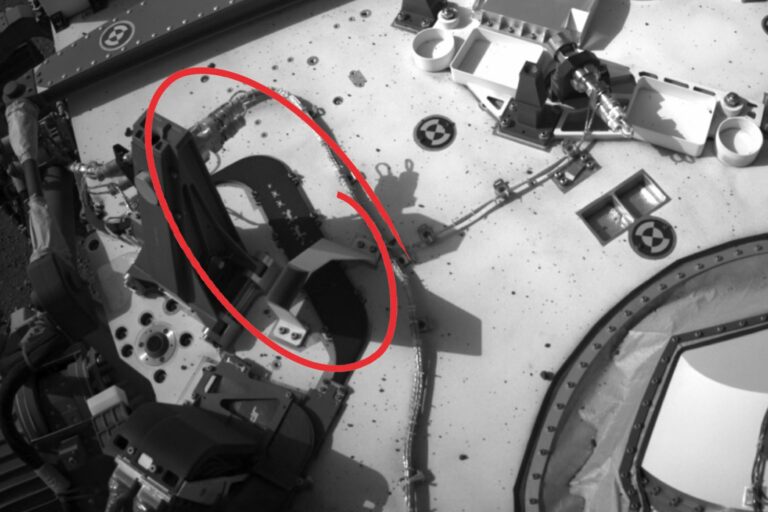 If aliens were to ever come across evidence of Earth technologies in the form of spacecraft, probes, or rovers we have placed on planets like Mars, what would our technology convey about life on our planet?

While carrying out missions designed to glean information about deep space and distant worlds, NASA has maintained a long tradition of ensuring that any intelligent beings that may come across our technology could get an idea about who the senders had been, and even providing a small sampling of what the dynamics of life on Earth are like.

In the latest example of this tradition, JPL engineers enclosed what appears to be a “family portrait” of past Mars rover missions with Perseverance, documenting a short history of Martian explorations on the Red Planet. Spotted by some keen observers keeping an eye on images transmitted by the rover’s Navcam, a pre-launch image of the portrait was subsequently tweeted by Dr. Moogega Cooper, a Planetary Protection Engineer at JPL who clarified that it had been biologically cleaned prior to its attachment to Perseverance.

Now that it’s out, here is a photo of the family portrait just before it was bolted on! (For those wondering if it was biologically clean, yes… yes it was!). #Mars2020 pic.twitter.com/GSTfA896tQ

The tradition of sending similar “portraits” into space began several decades ago. In 1977, NASA launched the ambitious Voyager 1 and 2 missions, launching a pair of spacecraft onto trajectories that, after more than four decades, have carried them farther from Earth than our sun, or even the distant planetoid Pluto. Voyager 1 officially entered the realm of interstellar space back in 2012, followed by Voyager 2 in late 2018.

Despite their great distance, both of these spacecraft are able to relay information back to Earth using “NASA’s Eyes,” better known by its official name: the Deep Space Network (DSN), comprised of an international array of radio antennas which NASA relies on for operating its interplanetary spacecraft missions.

The primary mission of the Voyager craft had been exploration of Jupiter and Saturn, the success of which led to further explorations of the planets Uranus and Neptune. Presently, Voyager 2 remains the only spacecraft to have visited and studied these distant planets in our solar system. However, technologies capable of studying and relaying information back to Earth were not all that the Voyager missions carried: they also brought along a small library of information about life on Earth, contained on a golden record that each of the spacecraft carried with them.

According to NASA, the items chosen for inclusion on the records, which conveyed images and sounds representing various aspects of life on Earth, were selected by a committee chaired by Carl Sagan which curated “115 images and a variety of natural sounds, such as those made by surf, wind and thunder, birds, whales, and other animals.”

Along with these sounds from nature were musical selections spanning several eras and regions, as well as samples of fifty-five Earth languages, and even a message from then-president Jimmy Carter and the U.N. Secretary General. “Instructions, in symbolic language, explain the origin of the spacecraft and indicate how the record is to be played,” a NASA fact sheet explains.

However, arguably among the most famous of the contents that the golden records contained had been images of life forms from Earth, which included humans in a variety of situations. Among these had been the simple, but iconic silhouette renderings produced by Jon Lomberg which conveyed human couples, a mother pregnant with an infant child, and people in a variety of social and familial settings engaging in everything from eating, breastfeeding, sports, education, and even primitive hunting techniques (a selection of the images enclosed with the Voyager missions can be seen here).

At their current rate of progress, it will be forty thousand years before any of the images and sounds that accompany Voyager finally make their way to another planetary system. Even then, it remains in question whether they will be discovered at any time by intelligent life forms. Still, one day in the very distant future aliens from some faraway place–long after the heyday of Earthlings as we presently exist–may discover our then-ancient spacecraft, and catch a glimpse of what life on Earth had once been like.

That, or perhaps future visitors to Mars will discover Perseverance and its small representation of a robot “family,” detailing the stages of development that led to early explorations of the Red Planet by Earthlings in the late 20th and early 21st centuries.