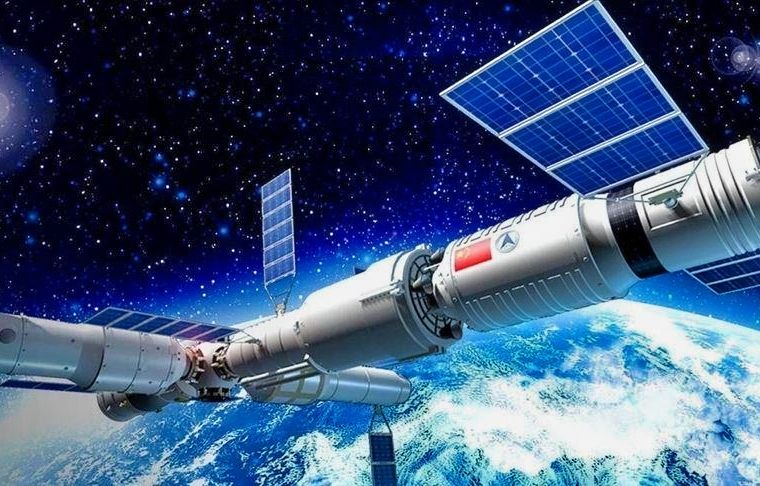 In April 2021, China launched Tianhe-1, the first module of its new orbital space station. They’re now betting that their new space station, Tiangong, or “Heavenly Palace,” will be fully completed in 2022. Technologically, it will outpace the aging International Space Station, and as Earth’s orbit continues to be a figurative and literal battlespace, the race is on.

Here are four things you should know about Tiangong and how it will rival the ISS.

Background: Why is China Building a Space Station?

The station, Tiangong, is designed to operate for more than ten years. China’s envisioned the creation of this space station since early 1992, but it’s finally coming together at a time when the dominance of low orbit space is being contested. The ISS, which China has been barred from since 2011 due to concerns of “national security,” is seeing its final years of operation. Russia may also leave the ISS early to create its own independent space station. And the space race has extended to companies like Axiom Space and Sierra Nevada Corporation, both of which are fiercely pursuing plans for commercial space stations.

The goal for Tiangong, according to the Chinese government, has to do with cooperation and not competition. Bai Linhou, deputy chief designer of the station, explained to Xinhua news agency that the station is “expected to contribute to the peaceful development and utilization of space resources through international cooperation.” Some critics argue that this is China simply beginning to flex its muscles in space.

Cooperation and competition aside, in terms of design and creation, here’s how the Chinese space station may have the ISS beat.

Though Tiangong draws an onslaught of comparison to the ISS—precisely what this article is doing—those involved with the construction and creation of Tiangong are upfront that there’s one arena in which the two stations aren’t competing: in size.

Gu Yidong, chief scientist of the China Manned Space program, told Scientific American, “We did not intend to compete with the ISS in terms of scale.” Instead, the three-module configuration is “based on China’s needs for scientific experiments” and “what we consider a reasonable size for the sake of cost-effectiveness.”

The one undeniable advantage of having a smaller station—Tiangong has less than a quarter the mass of the ISS— is that it can be completed much faster. Though China experienced a couple of setbacks in the construction of Tiangong, like when a prototype failed to launch in 2017, it’s nonetheless on track to have everything completed by the end of 2022. The ISS, on the other hand, took over ten years to complete.

Sometimes bigger isn’t always better, especially after 2024 when the ISS is supposed to be decommissioned, making way for the Artemis project’s Lunar Gateway project. However, NASA will most likely not get the Gateway up in time, leaving China as the only nation with an active station in orbit.

2) Tiangong is Powered by an Ion Propulsion System

What’s so great about the ion propulsion system? Well, it could reduce the journey time to Mars from eight months to just 39 days.

The ion propulsion system is by no means a novel product, and these thrusters have been used since the 1970s, mostly on satellites. Tianhe, however, is set to become the first crewed vehicle propelled by ion thrusters.

Traditionally, modules in space, such as the ISS, rely on chemical propulsion. Ion thrusters are not only much more efficient, but they can make space travel faster. Whereas the ISS’s thrusters require four tons of rocket fuel per year to keep it afloat, Tianhe’s ion thrusters would only need 882 pounds. That’s a little over a tenth of what is required for the ISS (of course, one is four times bigger than the other).

Ion thrusters could shorten the journey time. Whereas with today’s rocket technology, a spaceship large enough to carry fuel and other resources would take over eight months to reach Mars, with ion drives, that journey time is slashed down to 39 days.

Though there are complications to keep in mind with ion thrusters—they can degrade engine components—the Chinese scientists behind the project are prepared. After rigorous testing, the ion thruster for the CSS has reportedly run non-stop for over 11 months.

With such innovation, one could say Chinese technology is light-years ahead.

Tiangong is also envisioned to be a companion to Xuntian, a new space telescope with a field of view 300 times larger than NASA’s Hubble Space Telescope. The observatory will investigate a range of topics, from cosmology, to galaxy and stellar science, dark matter, and dark energy.

Xuntian’s designs and goals are similar to upcoming projects like the European Space Agency’s Euclid mission and NASA’s Nancy Grace Roman Space Telescope. Gu Yidong hopes that the observational data gathered between the three telescopes can lead to a deeper understanding of the universe and space.

Scheduled to launch in 2024, Xuntian will be able to dock with Tiangong for easy repairs and maintenance.

4) No exclusionary policies, at least publicly…

China wasn’t invited to hang with the other countries at the ISS, and they aren’t happy about it. So, according to China’s government and state media, it is making ‘international collaboration’ a priority with Tiangong. The station has room for domestic and international experiments, with resources allocated explicitly to research from other countries.

Nine international projects have been selected by the China Manned Space Agency (CMSA) and United Nations Office for Outer Space Affairs (UNOOSA) to be conducted at Tiangong. One of which is Tumors in Space, an experiment led by Trisha Larose from the University of Oslo to test if weightlessness can slow or stop cancer growth.

Soon, the CMSA-UNOOSA partnership will release a second call for project proposals. Scientists can apply for access to resources aboard the CSS. While this call for collaboration has a welcome tone, it is unlikely to attract the diversity it hopes for due to geopolitical conflicts, China’s human rights record, and the fact that tensions run high with China’s marked increase in military development.

In the U.S., NASA scientists are strictly prohibited from working directly with China. In Europe, projects in collaboration with China receive more scrutiny and pushback. So while the CSS may be open to all, few are choosing to join.

The Future of Space and Tiangong Station

Tiangong will be smaller and more efficient than the ISS and built to accomplish specific scientific tasks more quickly; it begs the question as to how NASA, the ESA, and other space agencies will react. The ISS is set to expire in 2024, with clearance to fly until 2028. However, as NASA and other partner nations continue to exclude China from future missions, there is little doubt that the Sleeping Giant will make it a priority to gain prestige, technological advancement, and military security by turning its eyes to space.

Moreover, the Russians have claimed that they will be leaving the ISS soon and building their own station.

Will the ISS be outpaced by China, and what does that mean for space security, science, and exploration?