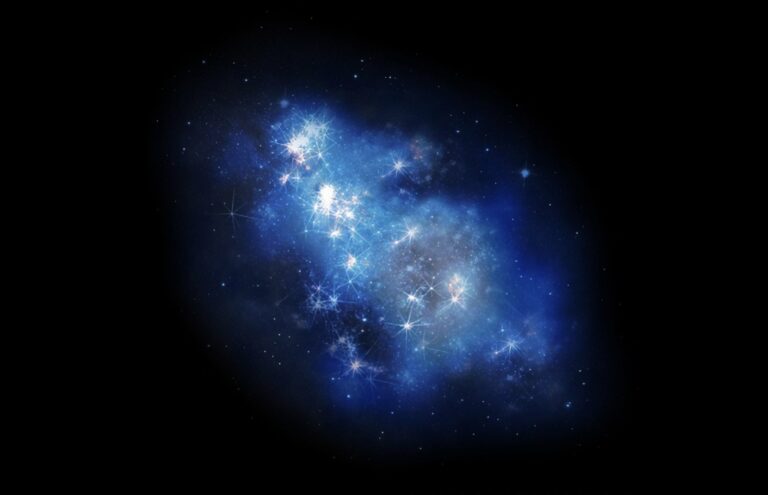 “Ghosts” of the Early Universe Reveal Clues, and Controversies, About the Formation of Galaxies

In the beginning—at least as physicists define it—our entire universe blossomed from what began as a single, super-dense bundle of hot energy. As this ball containing a recipe for the whole of the cosmos (otherwise known as a singularity) began to expand, the resulting “big bang” gave rise to the emergence and evolution of our universe as we know it today and all the things humans can perceive in it.

Pondering this idea is pause-inducing—humbling might be another word—and many have attempted to grapple with its meaning and implications over the years. Such had no doubt been the case for George Gamow, the Russian-born American physicist and progenitor of the modern idea of what we now call the “big bang.” The same was likely for earlier proponents of a similar universal model going as far back as the 1920s, put forth by the Russian mathematician Aleksandr Friedmann and Belgian astronomer Georges Lemaître.

As much as the big bang concept helps explain phenomena we observe in the universe, there are occasional problems that emerge from observations made in astrophysics. In the early 1980s, such an issue seemingly arose from observations of distant galaxies by astronomers at that time, some of whom noted that these far-off stellar clusters looked essentially the same as those closest to us. The spectrographic signatures of galaxies at a distance of 10 billion light-years were surprisingly similar to those just a billion light-years away from us.

Naturally, a galaxy is a galaxy no matter where it resides in the universe, so what’s the problem with observations like this? Some astronomers began to consider that the distant galaxies should have the appearance of being much younger, given that the light we can observe coming from them took so long to get here. In other words, galaxies at much greater distances from Earth may not be any younger than those close to us. Still, the information carried to our telescopes by the light they produce should undoubtedly cause them to appear as though they are in a younger phase.

In an article entitled “Most Distant Galaxies: Surprisingly Mature,” Science News noted the apparent discrepancy, which raised several questions. Might it be possible that galaxies reach a state of maturation relatively quickly, in the cosmic sense of things? Another possibility is that this might indicate a problem with our understanding of the universe’s age, or even point to more controversial ideas that question how solid our concept of the big bang really is.

Another question here is whether the problem astronomers addressed back in the early 1980s really exists. Part of the issue could arise from our notions about how galaxies are supposed to look. The truth is, astronomers don’t get very many opportunities to observe truly ancient galaxies. Being so far away, much of the light they produce is only visible in the infrared portion of the spectrum. So, to get a clearer picture of how an early galaxy should look from a great distance away, we have to rely on the best examples we currently have on hand.

While such examples may not have existed in the early 1980s, the discovery of what is believed to be one of the universe’s oldest galaxies was finally made in 2016. GN-z11, as it is called, was detected in the constellation of Ursa Major and is considered a high-redshift galaxy. In keeping with Hubble’s law, a measure of the velocity of an object in space can be determined by how the light it produces shifts toward the red end of the visible spectrum (hence why astronomers call this property “redshift”). This arises from the increase in wavelength, and thereby, a proportional decrease in frequency and energy of light over distances. Thus, the greatest redshifts that astronomers have observed correspond to celestial objects at greater distances, with origins that are also the furthest back in time.

In a paper published in 2016 by P. A. Oesch and Gabriel Brammer, GN-z11 was identified as both the oldest and most distant galaxy astronomers have spotted to date. Based on its redshift, GN-z11’s distance from Earth was calculated to be in the neighborhood of 32 billion light-years. This means that the light from GN-z11 that we can observe depicts the galaxy as it appeared 13.4 billion years ago—when the universe was just 400 million years old—giving us the most precise picture to date of how an ancient galaxy would look. Looking at GN-z11 today is almost like being able to look back in time, and catch a glimpse of a “ghost” from an earlier time in our universe.

So does the appearance of a vastly distant galaxy like GN-z11 differ significantly from that of nearer galaxies, as astronomers decades ago had argued?

Mark Gallaway, a science communicator and astrophysicist, notes that the appearance of dwarf and spiral galaxies are much greater at higher redshifts, as are the appearance of active galaxies. These observations appear to be consistent with our expectations of how the appearance of galaxies might vary in terms of lesser or greater distances. However, he also notes that galaxies are essentially the same in the broad sense of things despite their variety. Since one of the similarities they share is that they formed early in the universe—likely within the first 500 million years or so—astronomers haven’t yet been treated to witnessing galactic formation.

It could be that at least some of our expectations for how celestial phenomena should appear may arise from misperceptions based on the names we give them, and that is particularly the case with the big bang. This popular name for the events that gave rise to the universe as we know it has surprising origins, involving the late astronomer Fred Hoyle, who awarded it this moniker on the fly during a BBC radio appearance to mock the idea. Hoyle had been a hold-out for the steady-state theory, a model which maintains that there was no single beginning point that gave rise to our universe. This alternative theory is mostly rejected today, based on observations (like redshift phenomena) that are in keeping with an ever-expanding universe. However, that wasn’t necessarily the case in Hoyle’s heyday.

Despite the antagonism behind Hoyle’s quip, the name stuck. Today, many are likely unaware of its origins, or of the fact that what we call the “big bang” wasn’t necessarily an explosive bang at all. The concept is an outgrowth from general relativity theory, and in keeping with Einstein’s ideas, what Hoyle jokingly called a “big bang” could be more correctly envisioned as a boundless expansion that began around 13.5 billion years ago of what had once been extremely condensed material, the results of which astronomers are still observing today.

First Moon Landing in 50 Years Only Weeks Away

The big-bang theory of the universe is derived from Albert Einstein’s general theory of relativity, which holds that the universe expanded from a minuscule, dense collection of energy called a singularity. There was no bang, per se; just a vast expansion of extremely condensed material, the results of which astronomers continue to observe today.

All of this to say, we live in an inspiring time for astronomy, and science in general. The recent launch of the James Webb Space Telescope resulted in the successful placement into orbit of the most advanced observatory ever sent into space. By its design, Webb is built to detect light beyond the red end of the visible spectrum at near- and mid-infrared wavelengths—precisely the region of the light spectrum where we can hope to find evidence of the oldest galaxies in our universe.

In the years ahead, it seems likely that many anomalies in the clockwork of the cosmos will be resolved as we peer deeper than ever before into the universe. In which case, time should prove that our questions about reality aren’t so much a matter of what we see, but rather, how much we see.

After all, it’s not for nothing that we refer to having a fuller sense of the meaning of things as seeing the “big picture.” With the aid of the James Webb Space Telescope and other innovative 21st-century technologies, our view of the greater cosmic picture is about to undergo a “big bang” of its very own, and the result will be a vast expansion of our universal knowledge in the years ahead.

Micah Hanks is Editor-in-Chief and Co-Founder of The Debrief. Follow his work and listen to his podcasts at micahhanks.com, and on Twitter: @MicahHanks.