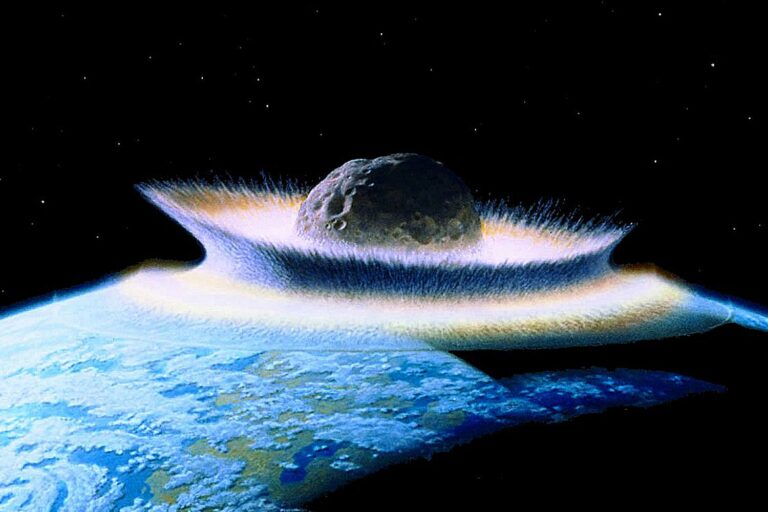 34 million years ago, planet Earth was entering a period of tremendous change and upheaval. Abrupt climate change was underway, which involved sudden cooling that some researchers think may have been the result of volcanic activity. Along with volcanism, evidence of more than on large meteorite impact also exists during this period, which likely contributed to mass extinctions that ensued as the Earth was bombarded by massive objects from space.

Such impacts, which may have all coincided with one another, likely formed the craters at Chesapeake Bay, Tom’s Canyon, and perhaps most significant, a 100-km-wide impact area in Siberia known today as the Popigai crater.

Within the last several years, research has increasingly linked the impact at Popigai, which produced the fourth-largest known impact crater on Earth, with the extinctions that occurred during this period. Known today as the Eocene–Oligocene extinction event, an abundance of the organisms that were impacted at the time were aquatic species, particularly the Archaeoceti, which were among the last of the earliest and most primitive cetaceans, some of which had still possessed amphibious traits unlike their modern kindred.

It is possible that some of the volcanic activity that is speculated to have occurred during this period could have resulted from impacts like those which formed the Popigai crater, which would have thereby contributed to global cooling that occurred around the time. Additionally, the Popigai impact was so violent that it is believed debris upturned from this suspected bolide impact would have been cast a great distance away, resulting in additional impact features as far away as parts of Europe.

An interesting theory proposed in 1980 by researcher John O’Keefe found possible connections that may exist between the North American tektite strewn field and the climate changes that occurred during the Eocene–Oligocene extinction event. According to O’Keefe, it was possible that some of the tektites that plummeted toward Earth during this period didn’t actually collide with the planet, and instead remained in orbit around it.

Based on the distribution of the strewn field associated with this event, the abundance of tektites swarming around the Earth in orbit that may have resulted would have formed rings around our planet that would have caused it to have a Saturn-like appearance, possibly lasting for more than a million years. According to O’Keefe’s theory, the rings of the Earth could have also obstructed sunlight significantly enough that it might have contributed to the cooling that the planet underwent during this period.

Returning to Siberia’s mysterious Popigai crater, geologists have long been fascinated with this massive impact feature for reasons tangentially related to the ancient cataclysm that helped form it. At the time of the impact, the extreme pressure that resulted caused graphite deposits in the surrounding ground to instantly transform into diamonds within a surround 13.6 km radius of the primary impact area. On average, these tiny diamonds are 0.5 to 2 millimeters in width, although larger specimens have been recovered from the area as well.

Although the “impact diamonds” found within Popigai crater aren’t suited for use in jewelry, they nonetheless have several industrial uses. For a time, the prevalence of diamonds within the crater resulted in the area remaining off limits, but today the crater is a designated GEOPARK under The United Nations Educational, Scientific and Cultural Organization (UNESCO).

Although many questions remain about the Popigai crater (much the same as the events surrounding the unusual Tunguska blast of 1918), it is likely that the impact site played a role in the factors resulting in the Eocene–Oligocene extinction event 34 million years ago. Future scientific studies of this significant geological location may even help us learn about the periodicity of life-threatening impact events on Earth, and how to prevent future cataclysms that may result from them.