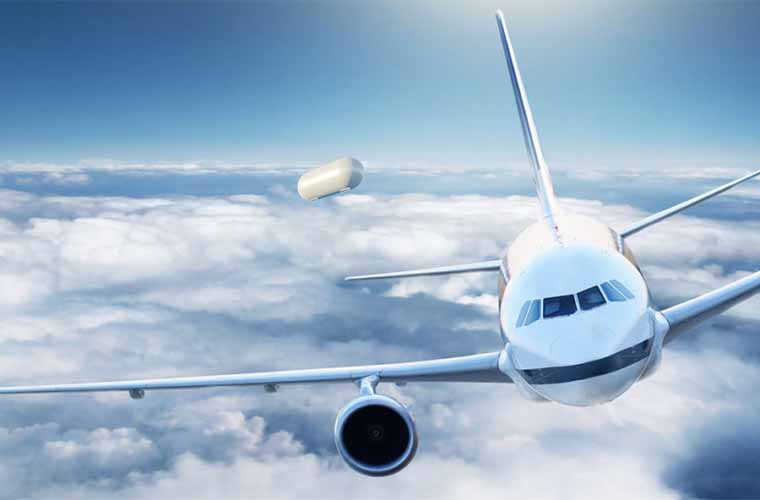 On August 6th, the American Institute of Aeronautics and Astronautics (AIAA) held a UAP related safety session as part of their annual conference. The six-member panel featured three scientists, including one from NASA, a European Space Agency (ESA) Project Director, the Director of Science for the National Aviation Reporting Center on Anomalous Phenomena (NARCAP) and one former U.S. Navy pilot.

All of the panelists presented a range of UAP related topics, from the history of scientists who studied UAPs, the possible physics behind craft like the increasingly infamous 2004 USS Nimitz Tic Tac incident, and the increasing number of near misses and up-close encounters being reported by military and civilian pilots alike.

Many recurring themes emerged throughout the nearly five-hour session, so here are The Debrief’s top 5 takeaways from this conference.

1. UAPs are real, and a legitimate safety issue

Few aspects of the session stood out more than the six speakers and nearly 100 member engineers watching the session live treating the subject with a serious, scientific tone. The host set that tone early with his statements on professional conduct, but that warning proved more or less unnecessary, with almost no talk of little green men or extraterrestrial visitors making its way into the lengthy session.

At one point, a particularly “seasoned” member, who had a highly distracting slide show of blimps and chemical formulas (among other random images) racing across the virtual wall behind him, jumped in to exclaim with glee that the whole subject is indeed a mystery and that the only thing we know for sure is, “it isn’t little green men who traveled here on faster than light spaceships!” His comment was met with complete silence and more than a few frowns.

Instead, a dry, shockingly mundane series of talks on the subject of aviation safety took place, with no scheduled speaker or attendee (minus the one, cause there’s always one) going out of their way to ridicule or minimize the reality of the safety issue facing commercial and military pilots worldwide, regardless of its origin.

“I think the biggest takeaway here,” said former US Navy pilot Ryan Graves, who repeatedly noted the real-life issue of potential mid-air collisions his former pilot colleagues still face every day, “we’re gonna just read right off the DNI report, is that some UAP appear to be real objects.”

2. The Stigma around this subject still exists, but that is starting to change

At one point or another, every speaker mentioned the stigma preventing respected scientists from studying this topic. Many noted how over half a century of study opportunities had been lost due to this issue alone.

“There was an open discussion among scientists about the nature (of UAPs) even if they are misidentified or not,” said NASA’s Ravi Kopparapu, pointing in particular to the UAP analysis conducted by the University of Arizona’s atmospheric scientist James McDonald back in the 1950s. “And it was not stigmatized.”

At least one attendee wrote in the side chat that the simple existence of this session was undeniable proof of a shrinking stigma.

Similarly, numerous other panelists and attendees pointed to the work of NASA and ESA employed astrobiologists and astronomers who are planning to use the space observation platforms of the future, including NASA’s James Webb Space Telescope, which is scheduled for launch in November of this year, to look for biosignatures and technosignatures, both signs of extraterrestrial life.

While this type of discussion mainly occurred during the informal Q & A portions of the session, such frank and open comments about the shifting attitudes of mainstream scientists toward the possibility of extraterrestrial life seemed to at least hint that the bulk of those in attendance was generally open to all possible origins of UAP, while also remaining more concerned about the fundamental issue of human safety in our skies.

3. Without more (and better) data, there can be no progress

Since the release of the DoDs UAPTF report, the call for better data has never been more vital. Or, as Sir Arthur Conan Doyle’s super sleuth Sherlock Holmes once declared, “Data! Data! Data! I can’t make bricks without clay!”

This point and sentiment was repeatedly emphasized throughout the AIAA’s UAP safety session, with every scientist and presenter practically begging for more data to analyze.

However, legitimate and honest ‘Ufology’ has always been shadowed by grifters and the gullible, so data quality is always a murky and tenuous situation. Moreover, UFO research has always been a bit of a middle school turf war. The dark side of this particular issue was on full display when University of Albany’s Dr. Kevin Knuth showed a slide of a “potential UFO” taken in 1985 by Ray Stanford.

Stanford has been a fixture in the UFO research community since the 1970s. An accomplished amateur paleontologist, he has also attempted to communicate with aliens and UFOs, and he has claimed to have psychic abilities.

In an email to The Debrief, researcher Douglas Johnson, who worked with Stanford on various UFO-related projects decades ago, pointed out that the video imagery by Stanford has never been independently vetted.

“What is lacking [is an] examination of negatives or direct-prints (and cameras and lenses) by technically competent persons with the appropriate backgrounds and equipment, who are truly independent of Ray Stanford, and persons with expertise in such fields as artifacts produced by shooting pictures through birefringent airplane windows,” Johnson explained via email.

Knuth himself noted the photo’s provenance issue, telling session attendees, “I want to be clear that that imagery here has not been independently vetted. So we’ve not taken that to be authenticated. And so, I want to be clear and honest about that.”

“The presentation contained much of value,” Johnson wrote in a follow-up email. “However, in my view, it was a serious error in judgment for Professor Knuth to include the images from a Super 8 movie from Ray Stanford. The disclaimers (“Imagery Not Independently Vetted,” etc.) didn’t really mitigate this, since Professor Knuth proceeded to discuss the Stanford images as examples of exotic [UAP] effects.”

“In my presentation for AIAA, despite the fact that some in the UFO community find Stanford to be controversial, I decided to include Stanford’s image of a UFO that he and his friends and family (4 adults and 2 children) observed at Emerald Cove Pier, Corpus Corpus Christi TX on October 5, 1985,” Knuth told The Debrief in an email when asked to comment. “I was very clear in my presentation that the imagery had not been independently vetted and authenticated. We have been unable to do this over the last year due to the pandemic, but that will soon be rectified.”

Knuth expressed disappointment that the UFO community was focusing on his inclusion of this image in his presentation, and that he worked with other researchers in the field to confirm the image was an original. He plans on writing a scientific paper on UAP characteristics using the Stanford image in the near future where the film and images will be put through proper and rigorous study.

You can’t talk about UFOs without a bit of drama!

Still, even with this particular, seemingly egregious Ufological faux-pas, which has haunted serious discussion and analysis of the subject since its origins, Knuth’s overriding heed and call for more and better data was as large as any component of his detailed presentation.

4. Scientists are the ones who need to rise to this challenge

Perhaps the most satisfying aspect of the entire session were the parts that were the hardest to understand. That’s because, more often than not, when you get a group of intelligent and highly educated people together and ask them to take a serious look at an issue as crucial as air safety, they tend to do just that.


Star Trek inspires us to look forward, so let's do just that.

For instance, some lengthy and complex calculations performed by the Scientific Coalition of UAP Studies (SCU) and presented by electrical engineer Peter Reali showed the incredible amounts of energy needed to propel an object like the alleged ‘Tic Tac’ UFO (as well as numerous other geometric form factors) from 28,000 feet to just 50 feet in elevation in less than a second. This analysis also highlighted the devastating effects such a rapid acceleration and deceleration should have on the surrounding environment when said object sheds all of that energy to make its complete stop.

“The point seven eight-second [calculation] of all projectiles was equivalent to 1.05 kilotons of TNT, or a tactical nuclear weapon,” said Reali. Oddly, he noted, such effects were not witnessed in 2004.

This point, which came up more than once during the other presentations, often led to deep mathematical discussions, typically ending with each and every one of the scientists and engineers on the panel (or the side chat) admitting that they were unable to account for the movements of the Tic Tac, much less its seeming lack of effects on its surroundings when shedding the massive amounts of energy required to descend and stop with such incredible speed.

Once again, to be fair, none of the panelists seemed to question the object’s existence, nor the accounts of the pilots and radar operators on record, which may indicate a bias. Regardless, assuming the testimony and video footage are sound, they debated a range of possible explanations grounded in present-day science. In the end, all seemed to concede that an apt explanation has thus far proven elusive.

“It’s a shame that 60 years ago we knew this much and still did not proceed as the scientific community to study these things,” lamented Knuth during one such discussion of past cases where scientists from the 1950s reported many of the same alleged performance and form factor hallmarks of current UAP events. “That’s 60 years of research lost.”

5. One voice rose above them all

For most who have had the opportunity to see Ryan Graves interviewed, there is seemingly little doubt that he is a trained, level-headed individual, whether seated behind the controls of a fighter jet or in a [virtual] room full of scientists and engineers. As such, it was no surprise that the group chose Graves to speak for them after the individual presentations, as his testimony was undoubtedly the most riveting.

“I’m hesitant to ask people [to speak out] or to state that this shouldn’t be stigmatized,” Graves noted during that discussion. “For me, this is a silly conversation because I know for a fact that this is still happening.”

Later during that same segment, Graves continued his near plea, telling the panel and online attendees, “you’re still aviators, and this is a safety consideration. [Our pilots see this] every single flight they go on. And this is all very pragmatic, you know? It’s an everyday air to air, or excuse me, air safety consideration.”

Graves’ measured tone once again came to the forefront during a particularly heated exchange between scientists regarding the inability to get their hands on classified signal data. “The fact that we’re talking about [access to] signals,” said Graves, “still, in a time when people are having near misses, is disturbing.”