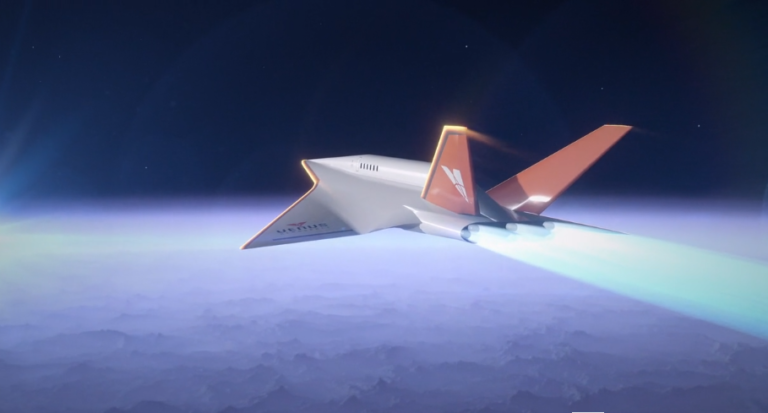 Aviation startup Venus Aerospace has finally revealed new animation and key specifications of its Stargazer spaceplane. Designed to travel at an altitude of 170,000 feet and nearly ten times the speed of sound, the futuristic-looking spaceplane boasts the unique ability to reach virtually any location on Earth within one hour.

After decades of research and experimentation, an era of hypersonic flight, where aircraft routinely travel at over five times the speed of sound, is finally upon us.

Domestic and foreign military branches are testing and perfecting hypersonic missiles, while aviation companies are moving forward with designs for commercial hypersonic planes. Some of those military projects are reportedly close to actual deployment, while the commercial efforts are still years away from actual implementation.

Founded in 2020 with millions of dollars in government and private venture funding, Houston, Texas-based Venus Aerospace is increasingly positioning itself as a critical player in this effort, including some incredibly lofty goals. And, oh yeah, the new Stargazer spaceplane looks really, REALLY cool, too.

“What we’re developing is nothing short of revolutionary,” says CEO and co-founder of Venus Aerospace Sarah “Sassie” Duggleby in a video promoting the aggressive goals of the fledgling aviation company. “We’re building a spaceplane that allows one-hour global travel.”

“To be able to go anywhere in the world in an hour, it changes everything,” Duggleby adds.

Of course, the Stargazer spaceplane is far from complete, with a list of critical technological developments still waiting to be overcome. According to the company’s website, those include “a zero-emission next-generation rocket engine, innovative aircraft shape and leading-edge cooling, which allows the spaceplane to take off from existing spaceports, using existing infrastructure.”

That last part is particularly vital, as Venus hopes to use the existing airport infrastructure to begin and end each flight.

Once in the air, the craft will climb to around 170,000 feet in altitude between airports before shooting off at over 7,000 miles and hours. For comparison, this is nearly five times higher and over a dozen times faster than conventional commercial aircraft travel and essentially twice as high and twice as fast as the record-holding SR-71 Blackbird.

“As a society, we have been trying to build a spaceplane for 50 years,” says Duggleby, “and we’ve never been able to do it. With these advances, we can finally make it happen at Venus.”

According to the company website, Venus has “scaled fast” over the last year, resulting in several key advancements. For example, the company “designed and built its tech demonstration engine, executed key experiments at hypersonic wind tunnels and propulsion test facilities throughout the U.S., and started a ground test campaign at Spaceport Houston.”

“Nothing like Mach-Nine has ever been thought possible,” says Dr. Andrew Duggleby, the company’s co-founder and CTO. “The technologies we’re putting together here at Venus Aerospace let us go at that speed. No one else has this.”

VENUS IS LOOKING TO FLY A SUPERSONIC, SCALED STARGAZER DRONE BY YEAR’S END

The company’s site also reports that “over the next year, Venus will start subsonic and supersonic flight testing of a scaled drone.” But like most forward-looking aviation ventures, Venus Aerospace has a long road ahead before building and testing a full-sized Stargazer.

Still, given the impressive list of military experts, academics, and aerospace veterans on the company’s Stargazer team, they seem well-positioned to move humanity significantly closer to the goal of hypersonic flight. And maybe, just maybe, they will even deliver on the promise of one-hour worldwide travel.

“Our heads aren’t in the clouds,” says Sassie Dugglebey to close the company’s hype video, “we’re above them.”