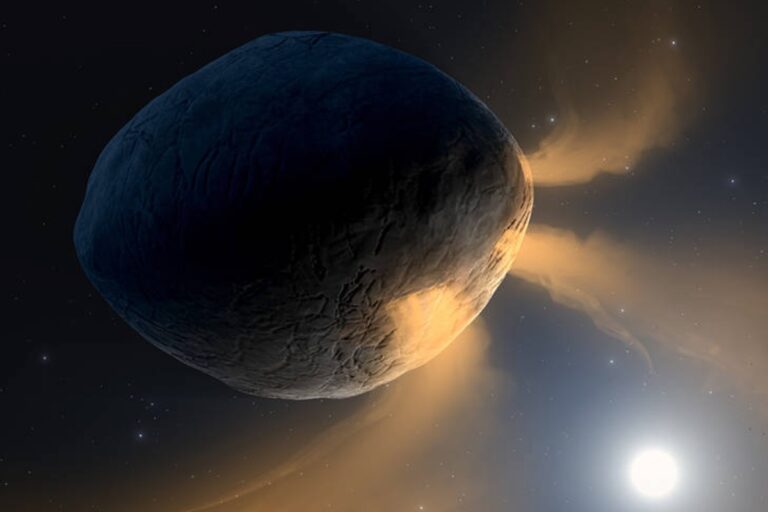 Mysterious Asteroid Phaethon is Challenging What We Understand About Comets

Phaethon, a mysterious near-Earth asteroid currently being studied by NASA, may exhibit comet-like behavior despite lacking the significant amount of ice required to produce such features, new research suggests.

Asteroid 3200 Phaethon, an active Earth-crossing or “Apollo asteroid” discovered in October 1983, possesses an orbit that brings it closer to the Sun than any other named atmosphere. Recognized as the progenitor of the Geminids, an annual meteor shower that peaks in December, the asteroid derives its name from the ancient Greek myth involving Phaëthon, the son of Helios the sun god.

3200 Phaethon is approximately 5.8 km in diameter, and after decades of observation, its orbit is well recognized by astronomers. Yet despite this, Phaethon still has its mysteries, which includes how it manages to function like a comet in many ways, while not possessing the requisite ice to be capable of such peculiar behavior.

When comets make their way through our inner solar system, heat from the Sun causes ice they contain to begin to melt and vaporize. It is the gas produced as a comet’s ice melts that produces their signature bright tail, as rock and gas begin to dislodge from the parent body and disperse behind it, sometimes extending for as much as several millions of miles. The appearances of these objects when they pass near enough to Earth to be seen with the naked eye can produce a unique spectacle for stargazers, and the often rapidly moving objects appear to hang suspended and motionless in the night sky at such a great distance.

Unlike comets which contain an abundance of ice, asteroids are primarily composed of stony material which does not melt and evaporate as the sun warms them. That’s not the case with Phaethon however, which despite lacking any large quantities of ice, still appears to exhibit peculiar cometlike behavior.

Now, a recent study proposes that the key to the mystery could be a salty one.

According to the authors of the study, Phaethon’s lengthy 524-day orbit carries it into the orbit of Mercury, where it becomes subjected to temperatures of up to 1,390 degrees Fahrenheit. Having been periodically subjected to such temperatures over time for as long as it has remained in its current orbit, any water, as well as ice from carbon dioxide or carbon monoxide would have long ago been heated to the point of evaporation, leaving Phaethon empty and dry.

Despite this, as Phaethon’s orbit carries it near the Sun, the space object appears to brighten, not unlike a comet as it produces its signature vapors. The question, therefore, is what could account for the asteroid’s odd comet-like behavior?

According to lead author Joseph Masiero, part of what inspired the new research into Phaethon’s peculiar behavior had been its role as the source for the annual Geminids.

“We know it’s an asteroid and the source of the Geminids,” Masiero recently said in a NASA press release. “But it contains little to no ice, so we were intrigued by the possibility that sodium, which is relatively plentiful in asteroids, could be the element driving this activity.”

A clue to the chemical composition of Phaethon can be found in observations of the annual Geminids which, as they streak through the atmosphere every December, produce certain colors as they burn. If Phaethon and its associated Geminids possessed an abundance of sodium, the Geminids would be expected to possess an orange coloration as they burned through the atmosphere, which actually is not the case.

Nonetheless, one theory about how Geminid meteoroids are propelled away from Phaethon’s surface is that sodium believed to exist on the parent asteroid could play a role. According to this theory, the extreme temperatures the asteroid is subjected to while in orbit around Mercury may cause sodium below its surface to “fizz” into space through cracks in its crust. These jets of sodium produced by the heated asteroid might not only account for its bright appearance as it approaches the Sun, but also could explain what mechanism could be ejecting meteoroids away from its surface over time.

According to Björn Davidsson with NASA’s Jet Propulsion Laboratory in Southern California, there wouldn’t have to be large quantities of sodium to achieve this.

“Our models suggest that very small quantities of sodium are all that’s needed to do this,” Davidsson, a coauthor of the new study, said in a statement. Davisson said “nothing explosive, like the erupting vapor from an icy comet’s surface” would be required, adding that the proposed mechanism would be “more of a steady fizz.”

The team was able to test their theory by analyzing samples from a meteorite recovered from Mexico in 1969 that is believed to have come from a class of ancient meteorites called carbonaceous chondrites. Similar in composition to Phaethon, when samples from the 1969 Allende meteorite were heated during experiments at NASA’s JPL lab, the researchers found that sodium was lost when the samples were heated to temperatures on par with those that Phaethon is subjected to as it passes near the Sun. Although the sodium does bake off at these temperatures, other elements were able to withstand the extreme temperatures.

“This temperature happens to be around the point that sodium escapes from its rocky components,” said Yang Liu, a scientist at JPL and one of the co-authors of the study, in describing the JPL experiments.

“This suggests that the same may be happening on Phaethon and seems to agree with the results of our models.”

The new research is part of evidence that has accumulated for many years now that blurs the lines between asteroids and comets, and also shows the role that substances like sodium may play in the cometlike behavior of certain peculiar space objects, which might even include the interstellar visitor ‘Oumuamua discovered as it passed through our solar system in 2017.

The recent study, “Volatility of Sodium in Carbonaceous Chondrites at Temperatures Consistent with Low-Perihelia Asteroids,” appeared in The Planetary Science Journal, and was published on Aug. 16, 2021.