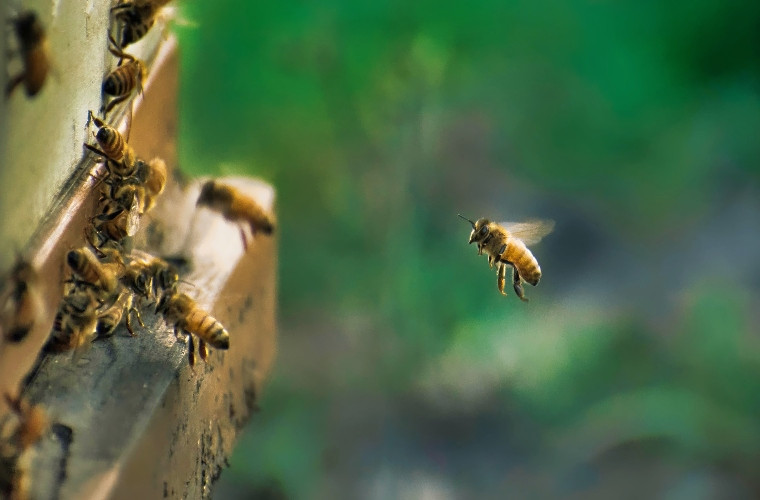 Climate change is affecting the effectiveness of bee flight, and while this could benefit northern bee species, southern bee species will be “pushed past their limits,” says a new study from researchers at Imperial College London.

As bees fly, they pollinate plants- which is essential for the growth of food. The more efficiently and effectively a bee can fly, the more it can pollinate.

However, climate change and the use of pesticides have already ushered in a massive decline in the bee population. Early in 2006, beekeepers noticed their beehives suffering a total loss of bees, known as colony collapse, reaching an alarming 90% loss rate. Though those numbers have improved, beekeepers still see one in every three hives collapse.

As temperatures continue to rise, scientists began to study how the heat affects the bee’s ability to fly.

Measuring the motivation of bumblebees to get up off their butts and fly, the team found that performance did correlate with air temperature. Bumblebees became more effective flyers above 12 degrees Celcius and peaked around 25-27 degrees Celcius. Above and below this temperature range, the bees’ performance began to decline.

“Climate change is often thought of as being negative for bumblebee species, but depending on where in the world they are, our work suggests it is possible bumblebees will see benefits to aspects of an important behaviour,” stated Daniel Kenna, one of the study’s authors.

Bees that live in northern areas may see benefits to their flight performance as global temperatures rise; however, bees in southern latitudes will see a decline in their ability. Less effective flying means less effective pollination.

“These risks are particularly pertinent for ‘fixed colony’ pollinators like bumblebees, which cannot shift their position within a season if conditions become unfavourable, and potentially provide a further explanation as to why losses have been observed at species’ southern range limits,” Kenna explained.

Bees, like any insect, are affected by the air temperature. As air warms or cools, the insect’s body temperature follows suit. As temperatures cool, the insect’s muscles become cold, and they cannot fly. If they get too warm, they overheat and need to stop.

The research team attached bumblebees ranging in size and weight to a “flight mill,” which is basically like a tiny carousel. They tested the bees across various air temperatures and constructed a “thermal performance curve” or TPC based upon the results.

However, the TPC showed a few other interesting results. When the temperature was below 15 degrees, the bees became pretty lazy and would often not fly much more than a hundred meters or so. On top of that, larger bees were less susceptible to the cold and would fly longer distances in cooler temperatures. Smaller bees like it warmer.

“While we still need to understand how these findings translate to factors like foraging return to colonies and pollination provision, as well as applicability to other bumblebee species, the results can help us understand how smaller versus larger flying insects will respond to future climate change, stated Dr. Richard Gill, the lead researcher on the team. “It’s not just pollination: how different flying insects respond to warming temperatures could also affect the spread of insect-borne diseases and agricultural pest outbreaks that threaten food systems. Applying our experimental setup and findings to other species can help us to understand future insect trends important for managing service delivery or pest control methods.”

Outlook: To Bee or Not to Bee…

A world without pollinators is a dead world. The decline in bee populations means that scientists need to wrap their heads around how insects like bees can survive living alongside humans who continue to alter global temperatures.

As “more extreme weather events, such as cold snaps and the unprecedented heatwaves experienced in recent years, could consistently push temperatures beyond the comfortable flight range for certain species of bumblebees,” Kenna explained, the need to understand how weather, chemicals, and other factors affect pollination are essential to human and bee survival alike.