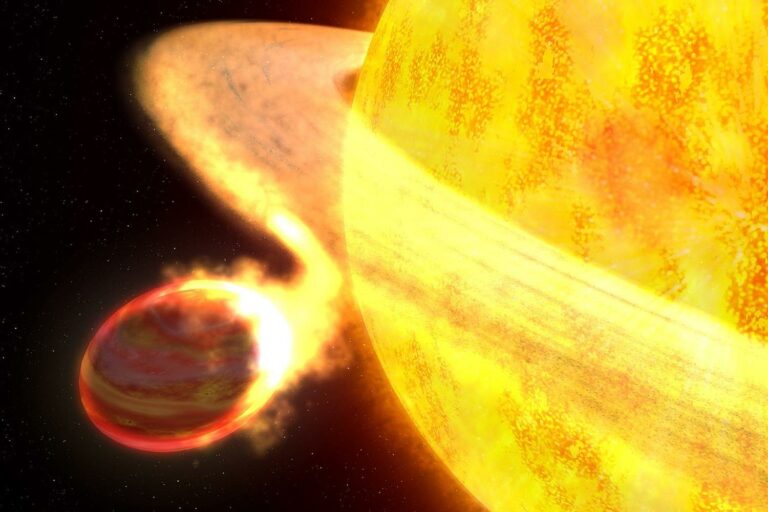 New Discovery on the “Strangest Exoplanet Ever Found” Has Astronomers Puzzled

Astronomers have detected clouds on a gas giant exoplanet about 520 light-years from Earth. Using data acquired from multiple telescopes, these scientists gathered observations so detailed that astonishingly, they also discerned the altitude of the clouds as well as the structure of the upper atmosphere.

This research adds to the ongoing quest to understand more about exoplanets—planets outside the solar system—and their atmospheres, in order to find other worlds hospitable to life.

The exoplanet in question, WASP-127b, was discovered in 2016. Once dubbed the “strangest exoplanet ever found,” WASP-127b is known for bearing little resemblance to any other gaseous planet known to date.

Orbiting very close to its own star, a year on WASP-127b passes in 4.2 days. Even though the exoplanet is 1.3 times the size of Jupiter, its mass is only a fifth of Jupiter’s. Past researchers have found that WASP-127b has a partly clear sky and an atmosphere rich in lithium, sodium, potassium, and possibly, water.

The thin atmosphere of WASP-127b, therefore, is ideal for those looking to analyze its content. A team of researchers led by astronomer Romain Allart of Université de Montréal in Canada did so using the light that streams through WASP-127b from the exoplanet’s host star.

Combining infrared data from NASA’s Hubble Space Telescope and optical data from the European Southern Observatory’s Very Large Telescope, Allart and his team was able to dissect the different altitudes of WASP-127b’s atmosphere.

Analysis: What did they find?

“First, as found before in this type of planet, we detected the presence of sodium, but at a much lower altitude than we were expecting,” said Allart.

The combined data of the two telescopes enabled researchers to narrow down the altitude of the clouds to an atmospheric layer with a pressure between 0.3 and 0.5 millibars.

But even with all the insights gathered, the researchers were left with several uncertainties. “We don’t yet know the composition of the clouds, except that they are not composed of water droplets like on Earth,” said Allart.

He continued, “We are also puzzled about why the sodium is found in an unexpected place on this planet. Future studies will help us understand not only more about the atmospheric structure, but about WASP-127b, which is proving to be a fascinating place.”

The optical data also suggests that unlike planets in our solar system, WASP-127b not only orbits in the opposite direction than its star but also in a different plane than the equatorial one.

“Such alignment is unexpected for a hot Saturn in an old stellar system and might be caused by an unknown companion,” said Allart. “All these unique characteristics make WASP-127b a planet that will be very intensely studied in the future.”

Outlook: The Evolution of Exoplanets Science

Allart and his team’s work on WASP-127b comes at the heel of another groundbreaking discovery in exoplanet science: exoplanet TOI-1231 b and its possible water clouds.

In June, a group of international scientists announced the discovery of TOI-1231 b, a Neptune-like exoplanet 90 light-years away from Earth.

TOI-1231 b has a mass 15.4 times larger than Earth. Despite orbiting close to its star, the exoplanet is colder than others, with an average temperature of 134 degrees Fahrenheit. As a very cold and very small planet, TOI-1231 b is likely inhabitable.

Nonetheless, the research enabled by the discovery of TOI-1231 b has only added to the search for another world hospitable to life in space. The potential for water clouds on TOI-1231 b, alongside the new information about the clouds on WASP-127b, all goes to show that there’s still much to learn about exoplanets.

“[T]hus far, none of the new planetary systems we’ve discovered look anything like our own solar system,” says Jennifer Burt, a NASA scientist and lead author of the research on TOI-1231 b.

According to Burt, this fact represents “one of the most intriguing results of the last two decades of exoplanet science.”