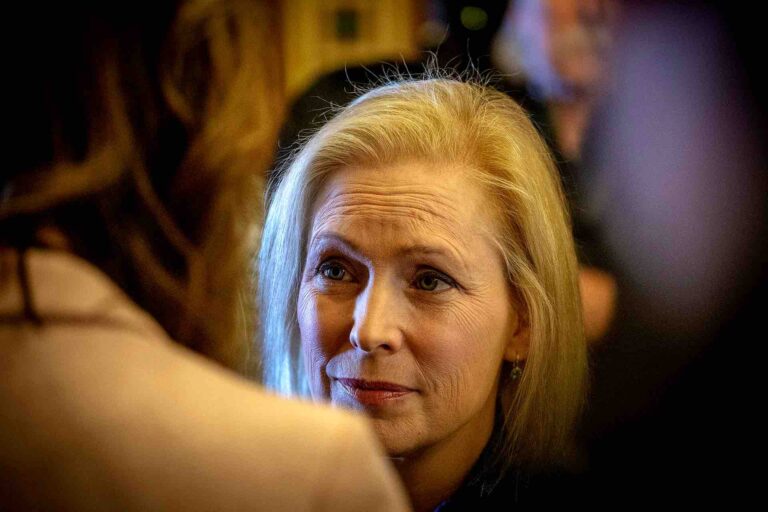 A proposal recently filed in Washington which aims to establish new requirements for how the military and the intelligence community address unidentified aerial phenomena (UAP) could also strengthen efforts toward sharing information about it with the public.

Submitted on November 4, 2021, by U.S. Senator Kirsten Gillibrand (D-NY), the proposal, titled “Establishment of Structure and Authorities to Address Unidentified Aerial Phenomena”, outlines a detailed plan for the establishment of an Anomaly Surveillance and Resolution Office (ASRO) and its operation. The proposal was filed as an amendment to the Fiscal Year 2022 National Defense Authorization Act (NDAA, H.R. 4350).

The proposal states that within 180 days of its enactment, “the Secretary of Defense shall, in coordination with the Director of National Intelligence, establish an office within an appropriate component of the Department of Defense, or within a joint organization of the Department of Defense and the Office of the Director of National Intelligence,” and outlines the duties of the newly proposed office.

The current duties of the Navy’s Unidentified Aerial Phenomena Task Force (UAPTF) will be taken over by the Anomaly Surveillance and Resolution Office, which is referred to simply as the “Office” within the proposal. The UAPTF will either be subsumed within this new office, or terminated after its establishment, the amendment says.

Significantly, the proposal also calls for reports to be issued to Congress “in both classified and unclassified form,” which will provide annual updates on the intelligence gathered by the Anomaly Surveillance and Resolution Office on its UAP investigations. The unclassified reports would surely be made public, as occurred with a “Preliminary Assessment” on UAP issued to the Office of the Director of National Intelligence (ODNI) on June 25, which was the product of a congressional directive enacted in December 2020.

The Office “shall submit to the appropriate committees of Congress a report on unidentified aerial phenomena” to be delivered no later than October 31, 2022, “and annually thereafter until October 31, 2026,” according to the proposal.

It further requires semiannual classified briefings for the House and Senate armed services and intelligence committees.

The Gillibrand Amendment is the latest in a series of efforts in Washington to enact provisions for more coordination in government regarding UAP investigations. The Debrief reported on legislation presented in early September, authored by Congressman Ruben Gallego (D-AZ), which had been the first to call for the establishment of an office within government solely for the study of UAP.  That language was not challenged when the House passed its version of the National Defense Authorization Act (H.R. 4350) on September 23. However, the provisions proposed in the Gillibrand Amendment go much further than the House’s Gallego provision in spelling out broad authorities and resources for the proposed new UAP-investigatory enterprise.

Douglas Dean Johnson, a volunteer researcher with the Scientific Coalition for UAP Studies (SCU) who was the first to report on the introduction of the Gillibrand Amendment, and who posted a detailed analysis of the proposal at his blog on Friday, said the Gillibrand Amendment “would go considerably further than the Gallego provision already approved by the House, or the much narrower provisions proposed by the House and Senate intelligence committees, to require the Department of Defense and the Intelligence Community to create new institutional arrangements and devote substantial resources to investigating and analyzing UAP, and to draw on UAP-related expertise from outside the government.”

The Debrief spoke with Johnson, who characterized the proposed amendment, if it passes, as being “very expansive in the mandates that it would impose on the Executive Branch with respect to unidentified aerial phenomena.”

Among the many proposals outlined within the Gillibrand Amendment is a requirement for line organizations “to rapidly respond to, and conduct field investigations of, incidents involving unidentified aerial phenomena under the direction of the Office.”

The proposal states that such organizations will operate within both the DOD and the intelligence community, and will “possess appropriate expertise, authorities, accesses, data, systems, platforms, and capabilities” for such rapid response investigations.

The line organizations are to be tasked with “scientific, technical, and operational analysis of data gathered by field investigations,” and are to include the “testing of materials, medical studies, and development of theoretical models to better understand and explain unidentified aerial phenomena.”

“It would require that the Secretary of Defense and the Director of National Intelligence set up permanent structures at quite a high level,” Johnson told The Debrief. “Not just an office with some paper shufflers, but actual apparatus where this UAP office would have command authority, so to speak. The ability to instantly tap into designated existing military assets to do rapid field investigations where UAP encounters are reported.”

Johnson adds that the proposed office would also have “the authority, and indeed the mandate from Congress to do science studies to analyze anomalous aspects of these encounters, and to try and come up with theoretical models to explain some of the things that are being observed.”

In addition to the rapid response organizations to be tasked with analysis of data collected from UAP field investigations, a science plan outlined within the amendment will aim to “test, as practicable, scientific theories to account for characteristics and performance of unidentified aerial phenomena that exceed the known state of the art in science or technology.” With a focus on propulsion, materials, weapons, and several other related areas, the science plan will ultimately “provide the foundation for potential future investments to replicate any such advanced characteristics and performance.”

Perhaps among the most intriguing wording in the Gillibrand Amendment involves the requirement for “An update on any efforts to capture or exploit discovered unidentified aerial phenomena,” appearing to leave open for such possibilities as the prior acquisition of UAP technologies by the United States.

Claims about the recovery of exotic UAP technologies by the U.S. government have circulated for decades. Arguably, the most famous involves the alleged discovery of mysterious wreckage on a ranch near Roswell, New Mexico in July 1947. Although newspaper reports initially referred to the wreckage as belonging to a “flying saucer,” statements that appeared the following day indicated that the debris, upon retrieval, had been identified as a weather balloon. This remained the official Air Force position until a reinvestigation in the 1990s revealed that Project Mogul, a top-secret Army Air Forces project at the time, had likely given rise to claims about Roswell wreckage and alien bodies.

Along with its provisions regarding the capture and exploitation of UAP, the Gillibrand Amendment also calls for the “assessment of any health-related effects for individuals who have encountered unidentified aerial phenomena.”

In addition to the establishment of the Anomaly Surveillance and Resolution Office, details are outlined for an “Aerial and Transmedium Phenomena Advisory Committee’’ to be comprised of representatives from various government agencies, as well as civilian groups that include the Scientific Coalition for UAP Studies (SCU), and the Galileo Project at Harvard University.

“I strongly support this amendment and my hope is that it would lead to more transparency about past data,” said Avi Loeb, Director of the Galileo Project and the Frank B. Baird Jr. Professor of Science at Harvard, in an email to The Debrief.

Although the current version of the Gillibrand Amendment includes a provision which says that all individuals nominated for the proposed Aerial and Transmedium Phenomena Advisory Committee must qualify “for a security clearance at the secret level or higher,” Loeb maintains that civilian UAP investigative efforts like the Galileo Project should remain focused on UAP data that is accessible to everyone.

“The Galileo Project is only interested in openly available scientific data and a transparent analysis of it,” Loeb told The Debrief. “Thus, classified (government-owned) information, which cannot be shared with all scientists, cannot be used.”

“Such information would compromise the scope of our scientific research program,” Loeb added, “which is designed to acquire valid scientific data and provide transparent (open to peer review) analysis of this data.”

“The Galileo Project will assemble new data, collected from its own telescope systems, which are under the full and exclusive control of Galileo research team members,” Loeb says.

As civilian research efforts like the Galileo Project remain underway, the question of whether the new Anomaly Surveillance and Resolution Office comes to fruition or not has everything to do with Gillibrand’s amendment, and whether it ends up being passed in its current form.

“It is a bold proposal, and it is the first time anything like this has been laid out on this subject in Congress,” Johnson said. However, he cautioned, it is currently only the proposal of a single senator—one of hundreds of possible amendments filed to the massive defense authorization bill—which is supposed to be enacted by the end of the year.

“That something this bold is now in the mix shows that the taboo is eroding. The Overton Window is expanding,” he said.

“It’s a difficult thing to get your head around,” says Tom Rogan, a foreign policy and national security reporter who recently laid out the case for why he feels the Gillibrand Amendment deserves bipartisan support.

“Put simply,” Rogan wrote on November 6, “Gillibrand’s amendment would take the necessary next step in getting to the bottom of a complex phenomenon that demands prudent research rather than casual stigma.”

Rogan says that part of what has contributed to the stigma surrounding UAP research over the years has been the military’s inability to draw conclusions about it, along with the problem of meeting any national security challenges it may represent.

“When you’re charged with essentially serving the public interest,” Rogan told The Debrief, “you don’t want to say ‘well, we’re out of luck here. This way beyond us.’”

Although the Gillibrand Amendment may provide a feasible path forward both for the military, and the intelligence community, Rogan thinks that the success of any future government UAP investigations will require better intelligence assessments, as well as more transparency on the UAP issue.

“I think there needs to be a more forward-leaning intelligence assessment,” Rogan told The Debrief, arguing that officials should acknowledge that “there appear to be highly unconventional vehicles not known in the inventory.”

“I think that should be declassified,” Rogan said.

The full Senate could take up the NDAA the week of November 15.  “Whether or not the Gillibrand Amendment makes it into the bill that comes out of the Senate, UAP is going to be an issue in the House/Senate conference committee, because the House already included the Gallego language,” Johnson told The Debrief, adding that “if the Senate comes into the conference committee with this stronger language, so much the better.”

The final bill sent to the President could contain “language that would be a quantum leap forward with respect to the formal public policy of the government on this matter—or it could end up be something much more modest,” Johnson said, emphasizing that people appealing to their elected representatives remains of key importance at this critical stage.

“Certainly, [for] anyone who has an interest in this issue, this is worthy of them devoting some time to, and communicating with their elected representatives that they hope that this expansive proposal does become law.”