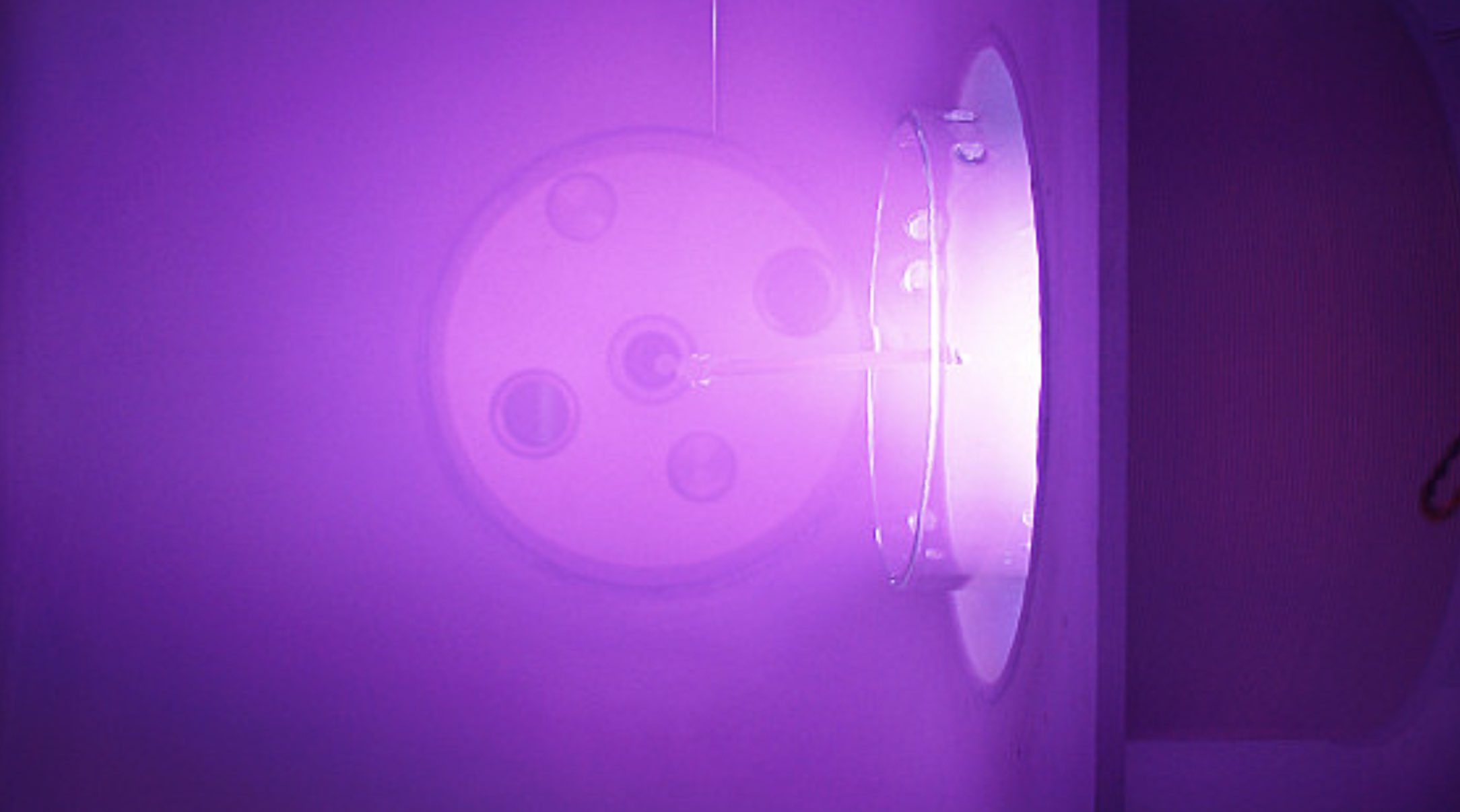 Researchers say they may have discovered the solution to a problem that has long hindered progress with a novel form of plasma propulsion that could one day carry humans to distant planets, and potentially launch a new era of space exploration.

The helicon double-layer thruster (HDLT) is a prototype plasma thruster propulsion system that works by injecting gas into an open-ended source tube, where radio frequency AC power produced by an antenna surrounding it electromagnetically ionizes the gas. Within this highly charged plasma, a low-frequency electromagnetic helicon wave is excited by the antenna’s electromagnetic field, further heating the plasma.

Such “magnetic nozzle” thrusters accelerate the plasma they produce to generate thrust for spacecraft, representing a form of electric propulsion with several potential applications in spacecraft design. However, while plasma flows that occur naturally within magnetic fields are often released or “detached”—like when coronal ejections erupt from the Sun—getting plasmas to behave in the same way in the laboratory is more challenging.

Part of the reason for this has to do with the fact that magnetic field lines form closed loops, requiring a mechanism for plasma flow to be detached from the magnetic nozzle in order for thrust to occur. Although ions detach easily on account of their sizable gyro radius, the same can’t be said for magnetized electrons, whose electric fields grab the ions and return them into the thrust structure, thereby nullifying the production of any actual thrust.

Now, researchers with Tohoku University and The Australian National University say they have announced the experimental demonstration of cross-field inward transport of electrons in a magnetic nozzle as a result of magneto-sonic wave excitation. The result appears to be a successful reduction in the divergence of expanding plasmas, as well as the reported neutralization of detaching ions; findings that represent a potential breakthrough in overcoming the longstanding plasma detachment problem.

Professor Christine Charles, the inventor of the helicon double-layer thruster and one of the co-authors of the team’s recent study, spoke with The Debrief about the implications their discovery could have on refining the performance of the HDLT, especially in terms of advancing future spaceflight systems.

“In laboratory experiments, the magnetic nozzle and the plasma flow are terminated by a vacuum chamber wall,” Dr. Charles told The Debrief. The closed magnetic field lines cannot be achieved within the vacuum chamber due to its finite size.”

However, when plasma flows collide with the walls of the vacuum chamber, Charles says the momentum originating from the thruster ends up being transferred there, resulting in the equal but opposite reaction force being exerted on the thruster.

“Therefore, we still do not know what would happen if we were to test it in infinite space,” Charles told The Debrief. However, the team’s new research bears promise since, in their most recent observations in the lab, electrons have been shown to behave in ways very different from past instances, which gave rise to the plasma detachment problem.

“In the laboratory, the present experiment surprisingly shows the signal leading to electron detachment from the magnetic nozzle,” Charles told The Debrief.

“Since the direction of the electron transport is the same as that of the ion transport, the cross-field-diffusing electrons can neutralize the ions detaching from the magnetic field lines,” Charles told The Debrief.

“Therefore, these results establish a valid scenario toward plasma detachment from the magnetic nozzle,” she says.

The HDLT, which was originally based on technologies developed by Rod W. Boswell, also one of the paper’s co-authors, employs a combination of an accelerating electric field and a lack of any need for a neutralizer. These make its use advantageous as a means of plasma propulsion, although there are still issues that could limit how soon the HDLT might be implemented in actual spaceflight systems.

“There are still a number of engineering challenges to sort out for the flight model development, such as the radio-frequency system, the thermal design, the endurance, and lifetime testing,” Charles told The Debrief.

“We are working in a University environment which is more suitable for prototyping thrusters. For such a big thruster system to be made suitable for space use, we will need partners from industry and/or a space agency.”

Fortunately, in the past, NASA has already expressed a desire to collaborate with Charles and the Plasma Research Lab at Australian National University. While chemical rocket propulsion remains the current standard in 21st-century space travel due to the impressive thrust it generates, the burn rate of chemical propellants is still far less efficient than plasma propulsion systems. Additionally, low rates of specific impulse reduce the maximum velocity that can be achieved by chemical rocket propulsion, thereby increasing the time required for space travel using this method of propulsion, which especially complicates any prospective manned space missions to nearby planets. Conversely, plasma thrust propulsion systems could overcome this by providing faster, more efficient space travel.

“Of course, we would like to develop the flight model as soon as possible,” Charles told The Debrief, and with NASA’s current aims at bringing humans to Mars in the coming years, technologies such as the HDLT could help make that a reality in the decades ahead.

Charles’s and her team’s recent paper, “Wave-driven electron inward transport in a magnetic nozzle,” written with lead author Kazunori Takahashi, and co-author Rod Boswell, was published in Scientific Reports and can be read online.