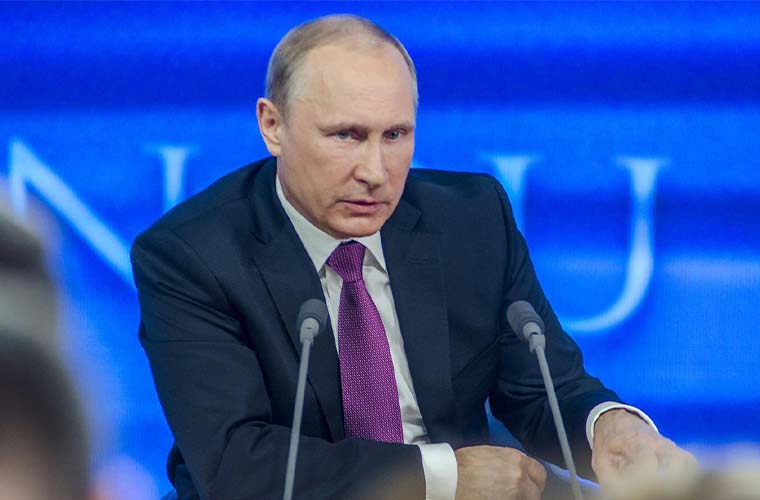 In a moment rarely seen on Russian-state media, a retired Russian Colonel and defense columnist, Mikhail Khodaryonok, offered a brutally honest assessment of Russia’s geopolitical and military situation since launching its invasion of Ukraine.

“The whole world is against us, even if we don’t want to admit it,” Khodaryonok told 60 minutes host Olga Skabeyeva.

Stunningly, Khodaryonok also urged viewers not to blindly accept the Kremlin’s narrative about the war in Ukraine.

“First, I should say, we shouldn’t take information tranquilizers,” Khodaryonok looked at the other guests.

“Sometimes you hear reports about a moral [or] psychological breakdown in the Ukrainian armed forces. That their mood is allegedly close to a crisis. To put it mildly, this is not true.”

“But it’s individual cases that decide the big picture,” the host Skabeyeva interjected. “And if several units have announced they lack financing and weapons, that’s also important and shouldn’t be discounted.”

A prominent figure among Moscow’s stable of propagandists, Skabeyeva has been dubbed by critics the “Iron Doll of Putin TV,” thanks to her fiery rhetoric and unflinching support for Russian President Vladimir Putin. After the Ukrainian forces sank the Russian flagship missile cruiser Moskva, Skabeyeva declared one could safely say that things had escalated into “World War III.”

Undeterred, Khodaryono calmly explained that Ukraine could mobilize a million people, and with the United States Lend-Lease Act set to take effect, from a strategic perspective, a million well-armed Ukrainian soldiers are “a reality in the nearest future.”

“We need to consider this in our strategic calculations. The situation for us will clearly get worse,” said Khodaryonok, as the other panelist looked on in silence.

Khodaryonok then began to offer his thoughts on Sweden and Finland joining NATO before being interrupted by Skabeyeva.

“How many professional soldiers in the army?” posed Skabeyeva, her index finger cradling her chin as if she’d made a tremendous mental breakthrough. “Mobilized soldiers might not be very good.”

Continuing to maintain remarkable poise, Khodaryonok held out his hands and explained that the level of training and willingness to fight for one’s homeland determines a soldier’s level of professionalism.

“This dogma is very strong in the heads of some of our political experts who think that a contract soldier must be a professional. Not at all,” said Khodaryonok.

“[So] the desire to die for your country is professionalism,” an increasingly annoyed Skabeyeva, yet again, interrupted.

“[No] That isn’t professionalism. But it is an integral part of the high-combat effectiveness of an army. It’s one of the most important parts,” replied the retired Colonel. “Ultimately, victory on the battlefield is determined by the high morale of troops who are spilling blood for those ideas they’re ready to fight for. That’s just how it is.”

Leaving the other guests fidgeting in nervous silence, Khodaryonok continued his shockingly forthright analysis of Sweden and Finland joining NATO.

“The most important thing is to remain realistic from a political and military standpoint. If you don’t, then sooner or later reality will hit you so hard you won’t know what’s hit you,” said Khodaryonok. “The most important thing here, again, looking at the big picture, from the general strategic standpoint, is not to brandish missiles, for goodness sake, in the direction of Finland. This looks comical.”

“The biggest problem with our military and political position is that we are in total geopolitical isolation, and the whole world is against us, even if we don’t want to admit it.”

Clearly having had her fill of brutal honesty, “Who do you suggest making friends with and at what cost? Why don’t you consider the Chinese representatives of the civilized world?” Skabeyeva fired back.

“Their support for us isn’t so unconditional,” Khodaryonok looked back at Skabeyeva like a disappointed parent. “When against us is a coalition of 42 countries and when our resources, military-political and military-technical [means] are limited, this situation is not normal. One way or another, we must resolve this.”

Bringing up the elephant in the room, Khodaryonok pointed out that Russia presently doesn’t have any modern weapons or equipment for mobilized troops.

“Sending people armed with weapons of yesteryear into a war of the 21st century to fight against global standard NATO weapons would not be the right thing to do…mobilization will not solve these issues.”

And though rare, it is not entirely unprecedented for Russian media to deviate from the Kremlin’s hyper-aggressive messaging. Particularly in recent weeks as Moscow continues to suffer a string of defeats in Ukraine.

“That is the very last argument,” glared Popov. “I am certain that our armed forces are capable of achieving their goals without using such weapons that could destroy the whole planet.”

“But our oil depots and military units in Belgorod are being hit nearly every day,” Popov fired back. “So we’re not intercepting everything!”

Undisturbed pragmatism is a rare but refreshing oasis among a sea of Kremlin-controlled media typically inundated with conspiracy theories of NATO bioweapons labs, claims of “Ukrainian Nazis,” brash calls for the use of nuclear weapons, and “pobedobesie” – approximately translated in English to “victorymania.”

Nevertheless, as Skabeyeva closed the recent segment with Khodaryonok, she reminded viewers there was little tolerance for dissenting opinions in Putin’s Russia.

“Few people call what’s happening normal,” Skabeyeva nodded her trademark high ponytail as Khodaryonok looked on with a slight frown. “[But] I repeat, we were forced to do this. Our existence is on the line. Surrender is not possible.”