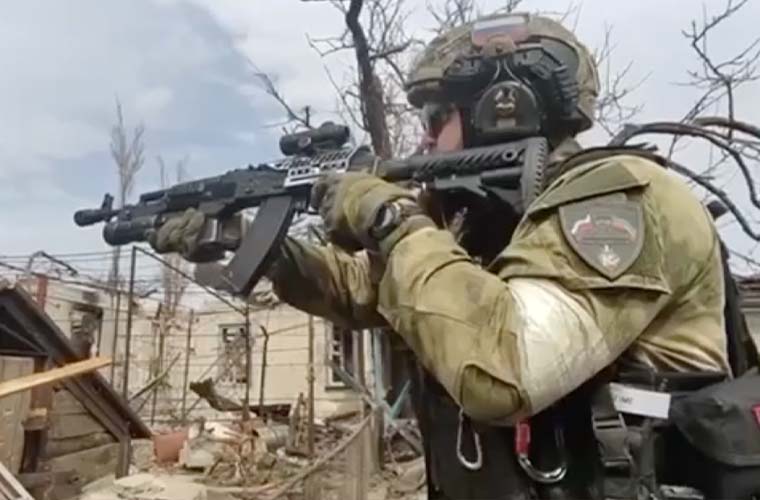 Russian Soldiers Get In a Shootout With Each Other

On Friday, the Chief Intelligence Directorate of the Ministry of Defense of Ukraine (GUR) reported that Russian troops from the far east republic of Buryatia, and fighters of the Chechen Republic, got into a large shootout with each other while participating in Russia’s ongoing invasion of Ukraine.

The gunbattle, reportedly involving upwards of 100 soldiers, supposedly went down in the village of Kyselivka, in the Chornobaivka territory of the Russian-occupied Kherson region.

While both groups are supposed to be fighting for the same side, GUR said a conflict between the non-Slavic groups arose when Buryat soldiers from Russia’s Eastern Military District refused to continue fighting.

There were additional reports that Buryatia troops were upset over “inequality” in the division of looted goods, with Chechen forces reportedly taking the lion’s share of booty plundered from Ukraine.

“More than 50 participants from each side were noted in the night incident,” read a statement by GUR. “The exact number of injured and dead is currently unknown.”

The Kherson region where the fight broke out has been under Russian control since shortly after the invasion began on February 24, and The Debrief has been unable to independently confirm the claims.

However, a conflict erupting between the two groups of non-ethnic Russian fighters is not particularly surprising.

According to analysts monitoring the war in Ukraine, soldiers of Russia’s poorest regions have made up the majority of Russian casualties so far.

In an April 25 report, exiled Russian independent media outlet Mediazona found that almost no residents of Moscow and St. Petersburg (which accounts for some 12% of Russia’s population) were among those killed in action.

Meanwhile, soldiers from the North Caucasus region of Dagestan and Buryatia in eastern Siberia accounted for most of the reported deaths. The median annual income in both areas is roughly 252,000 rubles, or $3,528.

A separate report by the Moscow Times found that two formations from Buryatia, the 11th Guards Separate Air Assault Brigade and 37th Guards Motor Rifle Brigade, had suffered the most significant single unit losses in the war to date.

Descension between Buryat troops and Chechen Kadyrovites could be evidenced in late March when Chechen warlord Ramzan Kadyrov shared a video of 37th Guards Motor Rifle Bridge commander, Colonel Yuri Medvedev, being transported to a field hospital after being run over by an armored vehicle near Makariv.

Medvedev would ultimately succumb to his injuries to join the growing list of KIA soldiers from Buryatia.

Both Western and Ukrainian intelligence sources later revealed Medvedev had been intentionally run over by one of his own soldiers who was angered by the high numbers of combat losses suffered in Ukraine.

“Basically, it’s a shit show here,” a Buryat soldier from the 37th Guards Motor Rifle Bridge told a colleague in a phone call intercepted by Ukrainian intelligence. “It’s such trash here … our own plane dropped a bomb on us.”

In Russia, citizens can be jailed for speaking out against Russia’s war against Ukraine or even describing the conflict as a “war” or “invasion.”

However, the loss of soldiers from Russia’s remote Buryatia region has been so significant that some locals have been willing to take the risk of speaking out.

“We are distraught. This bloodshed needs to stop. Our boys are dying,” said Olga Odoeva, the sister-in-law of a Buryat soldier killed near Kyiv in early March.

Some have said that the disproportionate use of non-Slavic fighters is a matter of Kremlin policy. According to some Russian political analysts, the Kremlin fears that ethnic Russians, many of whom have grown up being taught that Ukraine was “Little Russia” or to view Ukrainians as their “Little brother,” would be less likely to take up arms against their southern neighbor.

“Ethnic Russians, even the most pro-Putin and most committed Vatniks … in an extreme situation always find a common language and point of contact with Ukrainians,” said Political scientist Andrey Okara. “That doesn’t happen with Buryats and Chechens, on the one hand.”

Chechen soldiers of Russia’s 141st Special Motorized Regiment, who recently opposed Buryat troops in the reported shootout, have become some of the war’s most well-known fighters.

Though not for particularly good reasons.

Once feared for their history of violence, torture, and human rights abuses, Chechen soldiers fighting in Ukraine have primarily become a parody.

The sheer recklessness of troops widely firing machine guns and RPGs at unseen targets has led many commenters to conclude that the majority of soldier’s escapades are most likely staged.

The passion for treating war like a film production has led Chechen soldiers to film themselves as they engage in mock sword battles, handing out looted Ukrainian goods as “humanitarian aid,” coming under artillery strikes, inadvertently stepping on landmines, or even as they lay bleeding to death on the battlefield.

In a recent video, several dozen Chechen soldiers joyously waved flags of the Russian Federation, Chechnya, and the Russian-backed breakaway states of the so-called Donetsk and Luhansk People’s Republics, while celebrating the “liberation” of Mariupol in front of a still-burning building.

Most of these videos are proudly shared on Telegram by Chechen warlord, Putin devotee, and prolific social media user: Ramazan Kadyrov.

In honor of their patriarch, Chechen soldiers are often referred to as Kadyrovites.

Thanks to offering a remote masterclass in Dunning-Kruger soldiering, scores on social media have mockingly dubbed Kadyrovites the “TikTok Battalion.”

According to GUR, the Kadyrovite’s primary role is to “persuade” Russian forces to press forward in the seizure of Ukrainian territory. “That is, to open fire on someone who tries to retreat,” elaborated GUR.

It is believed that during one of these acts of “persuasion,” Buryat soldiers opted to fight Chechens instead of Ukrainians.

The gunfight between Buryat and Chechen soldiers wasn’t the only example of Russian morale issues reported by GUR.

There was also recently reported friction between Russian soldiers and commanders in occupied regions near Zaporizhzhia. According to GUR, Russian soldiers have complained to local Ukrainian citizens about feeling duped into signing contracts to participate in the invasion.

Soldiers claimed they were promised a “Crimean scenario,” with a lack of resistance and allocation of accessible housing in occupied territories. After being thrust into the reality of a full-scale war, some contract soldiers have refused to participate in combat. An unknown number of Russian dissenters were reportedly rounded up and hauled off by Russia’s Federal Security Service (FSB).

Presently, the consequences of the fighting between the Buryat soldiers and Chechen troops remain unknown.

Ultimately, we may have to wait until the video footage gets uploaded to TikTok before we can find out who won the battle.