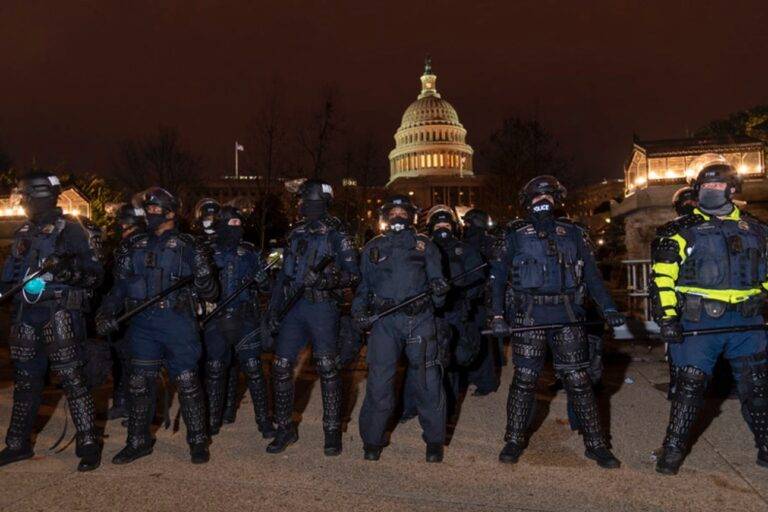 Welcome to this edition of The Intelligence Brief. In our lineup this week we’ll be analyzing 1) the unprecedented breach of the U.S. Capitol Building on Wednesday, and its security implications, 2) explosive devices left at the headquarters of the RNC and DNC in Washington, and 3) a breach of aviation frequencies that involved a threat related to the killing of Iranian General Qassem Soleimani. Let’s dive in.

Siege at the Capitol

Washington D.C. erupted into chaos on Wednesday afternoon after a large group of protestors in support of President Donald Trump moved in on the Capitol Building, where the certification of Electoral College ballots by Congress had been underway. What follows is a brief summary of events that transpired leading up to the siege, as well as security considerations in light of what we have learned in its aftermath.

Earlier in the day, U.S. Representative Paul Gosar of Arizona’s 4th congressional district objected to Electoral College votes for President-Elect Joe Biden in Arizona. Standing with him had been Texas Senator Ted Cruz, who stated that the objection was in writing and had been signed by a Senator.

Shortly afterward, the House and Senate separated to debate the issue for two hours. Notably, Senate Majority Leader Mitch McConnell, who called it “the most important vote I’ve ever cast,” decried the claims of election fraud.

“I will vote to respect the people’s decision,” McConnell concluded, in reference to Biden’s election victory, “and defend our system of government as we know it.”

Meanwhile, a large group of the President’s supporters which arrived in Washington earlier that day had gathered outside, where they met with D.C. police as they began advancing up the steps of the Capitol building. Videos posted online also appear to show police removing barricades and allowing them into the building.

Chief among the questions that remain about yesterday’s display relate to how the mob of protesters were able to enter the building, and as the aforementioned videos suggest, what role D.C. police might have had in allowing the situation to escalate.

I have seen Capitol Police shut down pretty much everything within a few square blocks of the Capitol because a mentally ill woman drove her car into a barricade. Why are people just able to mill around on the Capitol grounds today?

In short, the answer to such questions resides with the time-honored truism of “strength in numbers.”

The New York Times reports that “The police force, which numbers about 2,000 officers and has sole jurisdiction over the Capitol’s buildings and grounds, was clearly outnumbered and unprepared for the onslaught,” despite the fact that the coordination for the protest had taken place on social media beforehand. Even though law enforcement had foreknowledge that a protest would ensue, D.C. police clearly had not expected—and therefore had not prepared entirely—for an outcome the likes of what transpired on Wednesday.

However, some have argued that despite the force of the mob that entered the Capitol Building yesterday, such demonstrations may not necessarily have warranted a proportional response from law enforcement. Tanvi Misra, writing for Curbed, noted that “it was not about a lack of barricades or of boots on the ground. None of this will go away if more public spaces are further fenced off and boarded up.”

As protesters flooded into the House and Senate Chambers, as well as the offices of lawmakers, it has been reported that one fatal shooting occurred, and that three others have died from “unspecified medical emergencies” as a result of the events yesterday afternoon. More than a dozen members of law enforcement were also injured, according to NPR, and a 6 PM curfew was instituted by D.C. Mayor Muriel Bowser, who called the display “unpatriotic,” and “unlawful.” The National Guard for Washington and Virginia was also activated later in the afternoon, in response to the protests.

Explosives at the RNC and DNC

WUSA9 out of Washington later reported that both devices were identified as pipe bombs, which “were found inside a car, where a long gun was also discovered.”

Molotov cocktails were also reportedly found near the Capitol Building, again suggestive of how badly things might have escalated.

Meanwhile, with the eventfuness of Wednesday’s protests in Washington, news of a concerning call reported by multiple air traffic controllers in New York on Monday was somewheat overshadowed. The call, which managed to breach official aviation frequencies, reportedly featured a digital voice saying “We are flying a plane into the Capitol on Wednesday. Soleimani will be avenged.”

The source of the message has yet to be determined. However, the timing of the communications breach on Monday coincided with the anniversary of the death of Qassem Soleimani, the Iranian general who was killed last year during a targeted drone strike that had been ordered by President Trump.

Although it was reported that officials investigating the incident did not deem the threat to be credible, it does raise further questions about the circumstances which unfolded in Washington on Wednesday. Despite having awareness of the threatening call, in addition to having foreknowledge of the demonstrations that were also planned to coincide with Congress’s certification of Electoral College votes, police forces were only moderately equipped at the time protesters arrived. Additional support from the FBI and National Guard, as well as back up from other law enforcement agencies, did not arrive until hours after the breach initially occurred.

In light of the myriad concerns our nation has faced this week, perhaps our state of preparedness in advance of potential future threats deserves an audit. Wednesday’s unprecedented events–though they certainly could have been worse–should nonetheless serve a reminder of this.