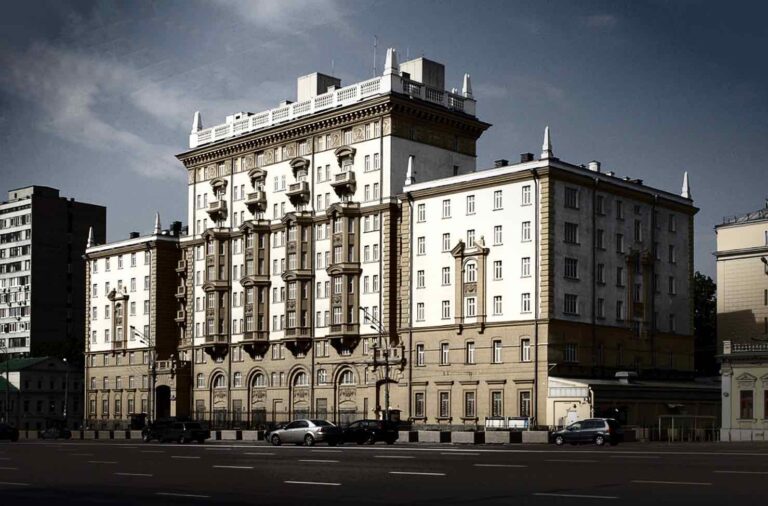 The “Moscow Signal”: How Russian Directed Microwave Rays Once Caused an International Incident


Decades ago, the Soviet Union admitted it spent decades blasting the U.S. Embassy in Moscow with "mysterious" beams.

“After more than a decade of U.S. diplomatic protests, the Soviet Union has ceased bombarding the American Embassy here with microwave radiation, an embassy spokesman said Tuesday,” an Associated Press story reported in the spring of 1979.

The news might have been very fitting had it been published today, in an era where incidents involving mysterious neurological symptoms have reportedly beset dozens of U.S. personnel at embassies in several countries now for several years.

“Russians stop embassy rays,” read the headline that appeared in the St. Louis Globe-Democrat on Wednesday, May 30, 1979. “The mysterious Soviet beams, first detected in the 1960s, aroused concern about possible health hazards for embassy personnel and proved a long-standing irritant in U.S.-Soviet relations,” read the report by Associated Press writer Barton Reppert.

“The specific purpose of the Soviet radiation was never disclosed,” the report added.

Located in a residential building approximately 109 yards away, it would ultimately be revealed that the source of the microwave beams had been oriented to blast the east side of the U.S. embassy in Moscow between its third and eighth floors. Although the admission wouldn’t come for several more years, their existence had been determined during background radiation testing procedures as early as 1953, prompting the installation of shielding within the embassy.

The revelation would ultimately result in international controversy following the disclosure of what became known thereafter as the “Moscow Signal.” Despite being of a magnitude of just five microwatts per square centimeter, this was “well below the threshold needed to heat things,” noted author Sharon Weinberger in her 2017 book, The Imagineers of War: The Untold Story of DARPA, the Pentagon Agency that Changed the World. “Yet it was also a hundred times more powerful than the Soviets’ maximum exposure standards,” Weinberger wrote, noting that Russia’s cautionary scaling for radiation exposure at the time exceeded even that of the United States.

“That was cause for alarm,” Weinberger adds.

Over the course of the next two decades, ongoing monitoring of the mysterious beams revealed that by the mid-1970s their intensity had increased. While U.S. intelligence officials remained aware of the issue, knowledge of the microwave beams was not publicly disclosed for years, and even many embassy employees had remained unaware of the situation until 1979.

A number of theories were proposed about the reasons for the microwave beams, which ranged from attempts by the Soviets at electronic jamming to the more widely accepted idea that microwave transmissions directed at the embassy had been used to trigger surveillance devices.

As early as the late 1960s, “the intelligence community concluded that the Soviets were using the pulsed radiation to activate listening bugs concealed in the embassy’s walls,” Weinberger notes. Later in the mid-1980s, the NSA’s GUNMAN Project also located surveillance devices implanted within typewriters in the U.S. Embassy in Moscow.

Despite this, some have maintained that the Soviet’s microwave beams might have been capable of causing harm to embassy employees at the time, whether or not that had been the intention behind their use.

In a study published in Reviews on Environmental Health, Jose A. Martínez reviewed epidemiological studies from the late 70s involving possible effects or increased mortality associated with the “Moscow Signal”, which at the time showed “no apparent evidence of increased mortality rates and limited evidence regarding general health status.”

“However, several loose ends still remain with respect to this epidemiological study,” Martínez noted, “as well as the affair as a whole.” Among these include the mysterious deaths U.S. Ambassadors Walter Stoessel, Charles Bohlen, and Llewellyn Thompson, in addition to several other instances where embassy workers had undergone surgeries related to cancer.

Around the same time, an investigation by the U.S. Department of State examined thousands of U.S. personnel and their families who had served at the Moscow Embassy. “In the wake of the microwave disclosures, former embassy employees and their families have recalled suffering strange ailments during their tenure in Moscow,” read a 1976 TIME report, “ranging from eye tics and headaches to heavy menstrual flows.”

“Only in recent weeks has Ambassador Walter Stoessel (who is said to be suffering from anemia and eye hemorrhaging) been briefing embassy staffers on the situation,” TIME reported, adding that “Rumors that the waves can cause leukemia, sterility in males or birth defects are circulating around the embassy.”

The following decade, Stoessel’s death of Leukemia was suggested by former Secretary of State Henry Kissinger to have been the result of microwave exposure, possibly similar to the several other deaths of embassy staff as a result of the onset of cancer.

“[W]e are trying to keep the thing quiet,” Kissinger is reported to have said in a phone call.

Following the State Department’s 1976 investigation and its published conclusions, some in the scientific community have continued to argue that the results of the study lacked independent review. “The resulting large report has never been published in peer reviewed literature,” wrote J. Mark Elwood in a paper in Environmental Health, although he concluded that the results of the original report were largely supported.

The bizarre circumstances surrounding the “Moscow Signal” of decades ago have an obvious corollary in modern incidents involving Havana Syndrome. Since 2016, several U.S. personnel at embassies in various countries have reported medical symptoms associated with what the U.S. Department of State has characterized as “unexplained health incidents.” The initial cases involving these purported neurological symptoms occurred at the U.S. Embassy in Cuba, from which the popular name for the phenomenon, “Havana Syndrome,” draws its name.

Since that time, dozens of employees from the U.S. and Canada have reported incidents involving headaches, disorientation, and a range of other symptoms which sometimes continue to affect the individuals well after their apparent exposure to their purported sources at U.S embassies in countries that include China, India, European countries, and even in Washington.

While the State Department has been reluctant to characterize the events as attacks, CIA director William Burns has openly referred to them as such.

To date, there remains no medical consensus on what the cause behind these health incidents may be. However, in 2020 a committee with members from the National Academies of Sciences, Engineering, and Medicine determined that directed pulsed microwaves had been “the most plausible mechanism in explaining these cases”, although noting that the variety of symptoms left open the possibility that other potential sources should not yet be ruled out.

According to a report on its findings, the committee members remained “concerned about how best to manage the continuing care of those already affected, and how to strengthen the nation’s commitment to the health and well-being of those who serve the country overseas.”

“Both of these priorities need and deserve additional attention and resources,” the report’s authors stated.