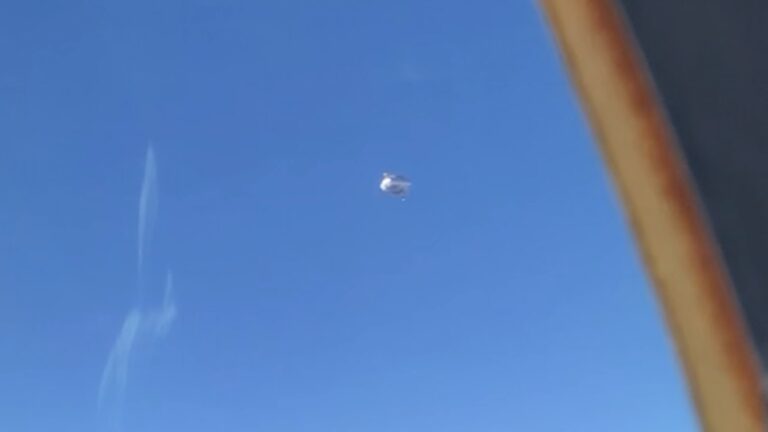 Were Those UAP Just “Drones and Balloons?”


Jazz Shaw provides his opinion on the recent release and coverage of the leaked UAP images.

Following the recent release of some newly leaked photos from Nevada Journalist George Knapp at Mystery Wire and night vision video released by filmmaker Jeremy Corbell from a series of UAP encounters off the coast of California in 2019, speculation has been running rampant (as happens with virtually every new, breaking UFO/UAP report). I have no interest in or intention of getting down into the muck and engaging in verbal pugilism over “fake versus real” or “information versus disinformation” debates. Suffice it to say that, while we can certainly hope for additional witness testimony in the future or additional signal data, for the time being, I am satisfied with the reputation of the sources and the confirmation provided by a Pentagon spokesperson as to the DoD’s possession of the material. This leads me to be convinced that the images presented accurately reflect the fact that a group of America’s naval vessels encountered something out in the Pacific during the dates specified.

I’m far more interested in what it was that these U.S. warships encountered, described by Navy personnel as being as many as a half-dozen Unidentified Aerial Vehicles (UAVs) spread out over many evenings. Or perhaps it might be more accurate to say that I’m at least equally interested in what they were not. Hearing descriptions of “pyramid-shaped craft” dipping in and out of the water and brazenly approaching a group of our destroyers is simultaneously exciting and alarming, but what were they? It’s a question the answer to which could foretell profound implications for our national security, our place in the universe, or both.

A UAP THEORY BOTH “DISAPPOINTING” AND DISTURBING

Stepping into the fray to address the subject question is Tyler Rogoway of The War Zone. In an article seeking to answer these questions, the title Rogoway chooses provides a significant spoiler upfront. “Adversary Drones Are Spying On The U.S. And The Pentagon Acts Like They’re UFOs.” As the headline would lead you to believe, Rogoway is presenting a conclusion that he admits will likely “disappoint some who hope the origins of all these events are far more exotic in nature…” In short, Ty Rogoway has studied the situation and concluded the most likely explanation for many (though he is clear to point out “not all” reports around the world) of the encounters being reported could likely be boiled down to a combination of drones and balloons from adversarial nations or other bad actors, some of which may be relatively low-tech in nature.

I’ll just start off by saying that although I spent quite a few years sailing on U.S. aircraft carriers, working on radar systems, and hanging out above flight decks and in Combat Information Center, Ty Rogoway, along with other writers at the War Zone, have undoubtedly forgotten more information about military aircraft and weapons systems than I’ve ever known. When he takes the time to study questions involving such platforms and capabilities and publishes conclusions about them, you would be well advised to see what he has to say. So I took the time to read the admittedly lengthy (okay… extremely lengthy) article he published. There’s a lot of fascinating information and insight there, but I find myself left with some nagging questions nonetheless

I’ll leave our readers to investigate the breadth of Ty’s research and the technical details that he includes. He covers aerial and submersible equipment available to adversaries ranging from Russia and China to terrorist groups to hostile individuals with technical savvy and grand ambitions. He describes systems of swarming drones and electronic warfare countermeasures that can “spoof” threats to our deployed forces, such as NEMESIS and PALLADIUM. Ty also aptly points to the deployment of new, advanced sensor systems and how those deployments seem to line up with waves of new “sightings,” which might be accounted for by the fact that each succeeding generation of radar and other sensitive electronic warfare systems will produce unexpected, but not always real results. (Speaking as a radar technician, I can confirm that our equipment can produce squirrely returns at times, such as “ghost images” from surface search radar, indicating targets that appear to be bearing down on you when, in actuality, they are dozens of miles away.)

SO WHAT’S WRONG WITH THE “DRONES AND BALLOONS” THEORY?

I wanted to highlight that question because it’s an important one. The answer is… nothing. Rogoway’s piece is clearly worth a read and contains reams of fascinating technical data. But with that said, there are two important elements to consider. The first is that not even Ty is claiming that “drones and balloons” are definitively what we are seeing. It’s something that we could be seeing. Or, more correctly, what the witnesses from the Kidd, the Russell, and the other destroyers reported.

The problem with Ty’s theory, at least as I see it, is that it relies entirely on electronic data, videos, still photographs, and all the rest. As I indicated at the beginning of this article, what we’re still waiting (and hoping) for is the testimony from the trained observers and military professionals on the scene, such as we’ve accumulated from the Nimitz and Roosevelt encounters.

Before any readers jump all over me, I am fully aware that human beings are imperfect recorders of visual data and our brains are not flawless databanks. Impressions retained by one witness may vary significantly from those of another, and those differences tend to amplify as the years go by. But at the same time, electronic data – particularly video and still images – can be significantly lacking in detail. The night-vision video revealed by Jeremy Corbell is an excellent example. What were those triangle shapes we observed? I certainly don’t know. But my point is, neither does Tyler Rogoway.

This returns us to my initial point about being less likely to identify what those objects are, but more importantly, helping us rule out some things that they are not. If sailors on board those ships were filming physical objects buzzing their vessels and seeing them with their own eyes, they were not simulated electronic warfare spoofs. If radar produces a return at that short of a range that corresponds with the video and testimony, they were not ghosts in the machine.

While an incredibly advanced drone system might conceivably produce such observations, it was Rogoways equally esteemed colleagues at the War Zone, Adam Kehoe and Marc Cecotti, who previously published an article studying this encounter and almost entirely ruled out the possibility of adversarial drones. They tracked the movements of all of the ships, both military and civilian, in the area during the encounters and obtained their deck logs. The amount of time those objects were in the air and the distance they remained from any launching platform made that explanation, in the authors’ opinions, highly unlikely.

Going even further, Rogoway failed to suggest a technological candidate that could fit the bill for drones (to say nothing of balloons) traveling such a distance and remaining aloft for that long, at least from what I read. The one possible exception would be some extremely advanced transmedium drones launched from a submarine. But, again, speaking as someone not lacking in naval operations experience, are we to believe that a Russian or Chinese submarine could be that close to San Clemente Island (and San Diego!) within striking distance of multiple American destroyers with advanced ASW (anti-submarine warfare) capabilities without our even knowing they were there? If so, we might as well just sign the country over to Vladimir Putin or Xi Jinping right now and be done with it.

If you’ll pardon my inner skepticism shining through for a moment, are we actually going to consider the possibility of balloons? Yes, terrorists have accomplished successful and destructive attacks on the battlefield and against civilian targets using both modest drone technology and even balloons. And Rogoway points to some staggering advances in both technologies by the most technically advanced terrestrial nations, including the United States. But if that many sailors on that many destroyers were unable to identify a balloon at close distance, we have a much bigger problem to worry about than potential extraterrestrials buzzing our military bases.

The point is that we still have no idea what the pyramid-shaped “UAV” buzzing the destroyers were. We can’t pin down what the “acorn” (or Batman ballon), the “sphere,” or the “metallic blimp” were at this point. And I will at least give Ty Rogoway a nod by saying that we still can’t really get much of a grasp on what they were not without additional data and eyewitness testimony. (Though I’m ruling out frozen seagulls, with due apologies to Mick West.) But concluding that these were strictly mundane, terrestrial phenomenon at this stage of the investigation strikes me as extremely premature and lacking in data-driven support. I freely acknowledge that I may yet be proven wrong, but something here doesn’t appear to add up. I’m not saying it was aliens, but as far as I’m concerned, a non-human intelligent source is far from being off the table.