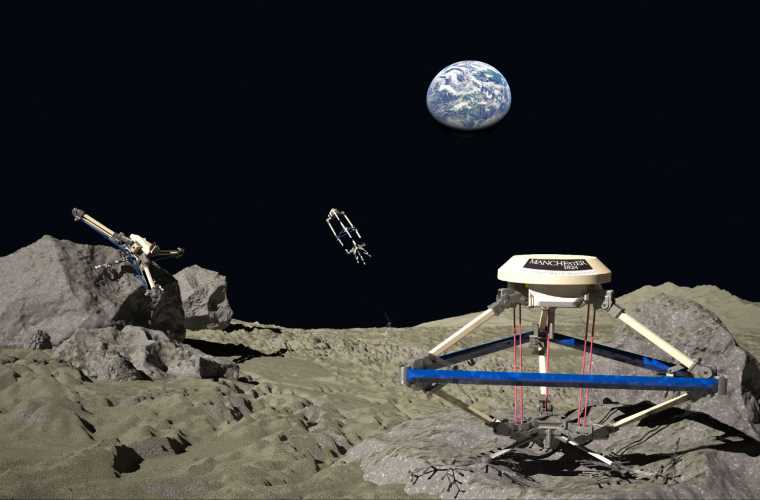 The European Space Agency (ESA) is exploring unique and innovative ways to investigate the moon’s underground network of ancient lava tubes. In February, the ESA stated, “The shelter that lunar caves provide, as well as the access to water and other resources, could be vital for our future human or robotic exploration of the Moon.”

In searching for new ways to explore these caves, the ESA’s SysNova program, which according to its site, “promotes joint studies by academic and industrial institutions across ESA Member States in the exploratory phase of new topics,” is looking to develop off-world drone technology able to navigate rocky and complex terrain they are almost sure to encounter.

“Traditional planetary exploration missions involve a single rover platform with wheels that can move across moderately uneven terrain,” the ESA’s project page states. “[However] more extreme rocky surfaces are challenging, and the risk of the lone rover becoming lodged or toppling is high.”

Fortunately, one of the projects under consideration looks to address this issue by taking inspiration from life forms found right here on Earth; the ability to hop.

Designed by the University of Manchester, the ‘hopping’ rover is one of five projects still under consideration for future funding. Two of these, the DAEDALUS and ROBOCRANE programs, have already moved to the next stage as a joint mission under the CDF (Concurrent Design Facility) program, while the other three are still awaiting a decision.

However, even the breakthrough DAEDALUS rover, which immediately brings to mind the BB-8 droid from the 2015 blockbuster Star Wars: The Force Awakens, is designed to roll, leaving it vulnerable to rocky, broken, or otherwise complex terrain. The drone proposed by the Manchester team seeks to address this problem by hopping instead of rolling in what would represent a first for space exploration.

The hopping rover design, the ESA’s project page explains, was “inspired by biology,” and the study of its feasibility by the University of Manchester team “investigated a network of low-cost, low-mass agile hopping rovers that can vault and bounce in complex terrain.”

Such a unique ability not only addresses the issue of navigating potentially mottled terrain during the specific moon lava tube explorations but is in line with the overall goals of the University of Manchester space robotics research, whose project site explains, “The next generation of autonomous explorers will need to break the mold of traditional designs in order to navigate complex, cluttered space environments. Inspired by animal locomotion, we aim to build systems that can crawl, climb, jump, fly and swim, and provide new and expanded capabilities for robotic explorers.”

Separately, the ESA project’s multimedia site also points out that along with being able to hop, the proposed rover would offer other advantages as well, including communicating with each other and working independently or in a swarm.

“Each rover would be able to operate independently while also communicating with nearby rovers to share navigation and mapping data,” the site says, “using a range of complementary sensing packages, which could be deployed across the rover network.”

Outlook: Bouncing into the Future with A Hopping Robot Drone

At present, the ESA is still evaluating the Manchester “hopping robot” proposal, as well as others, a process that Loredana Bessone, the Technical Officer for the studies and an ESA Project Manager, sees as not only necessary but inspiring.

“We are really excited to see how these studies pan out, and to discover how they will contribute to our planning of a mission to explore lunar caves,” she said back in 2020. “It’s fantastic to work with academia, research institutes, and industry to achieve this ambition.”

At that time, Bessone also noted that “although the studies were very different in topic and approach, they all provided great insight into potential technologies for exploring and investigating the geology of the Moon’s subsurface.”

Time will tell if the hopping rover makes the final cut. Still, as Bessone herself pointed out in the 2020 piece, just the process of engaging the various research institutions for novel solutions has been rewarding in and of itself.

“It’s been a fascinating journey,” she said, “and a great opportunity for ESA to start looking into missions to explore lunar caves.”