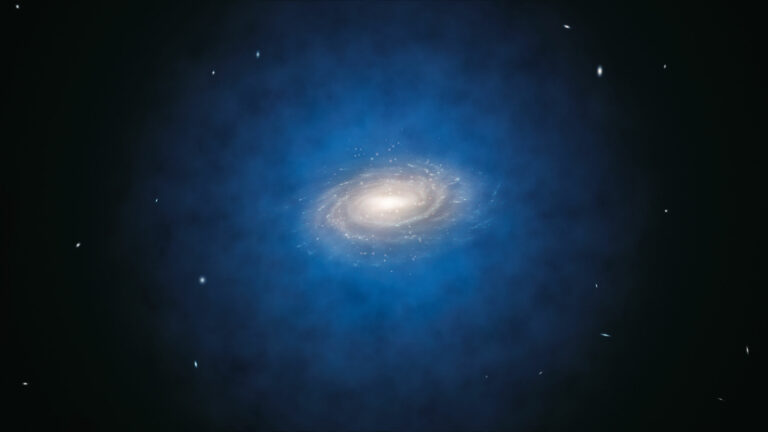 What is Dark Matter?

It is rather embarrassing to admit that over the past century, cosmologists were unable to figure out what most of the matter in the universe is made of. The ordinary matter that we are made of and share with familiar objects like comets, asteroids, planets and interstellar gas, only makes a sixth of the cosmic mass budget of all matter. The rest is invisible matter, showing no detectable interactions with ordinary matter.

The cosmological model that agrees best with the structures we observe on large cosmic scales invokes Cold Dark Matter(CDM). This matter is conjectured to be composed of massive particles that cooled to a very low temperature as a result of the cosmic expansion by the time that galaxies started to form. The model agrees with most cosmological data, including the image of the Universe when it was merely 380,000 years old in the form of the brightness fluctuations of the cosmic microwave background. On small scales, the CDM model generically predicts cusps in the density of dark matter at the centers of all galaxies, as well as a large abundance of dwarf galaxies down to masses that are millions of times smaller than the Milky Way.

There are multiple clues from observational data on small scales that deviate from these generic predictions. For example, dwarf galaxies tend to show a core rather than a density cusp at their centers, even though they are dominated by dark matter, and their abundance is below expectations. A simple way to remedy the situation, proposed two decades ago, is that the dark matter particles scatter off each other and smooth out the cusps at the centers of dwarf galaxies. Self-interaction of the dark matter particles is not needed in larger systems such as clusters of galaxies, where dark matter was first discovered. The main difference between these dark-matter-dominated systems is in the characteristic velocities of the particles; whereas dwarf galaxies possess shallow gravitational-potential wells in which particles move at a characteristic speed of ten kilometers per second, clusters of galaxies are millions of times more massive – with particles moving a hundred times faster.

A decade ago, I proposed in a paper with Professor Neal Weiner from NYU that perhaps dark matter has intrinsic interactions similar to electrically charged particles, like electrons or protons. In that case, the cross-section for a collision would decline inversely with velocity to the fourth power, yielding a large effect in dwarf galaxies and little impact on clusters. We related this possible behavior to the intrinsic properties of the unknown particles and their self-interaction, namely new physics beyond the standard model of particles. To have an astrophysical effect on dwarf galaxy cores, the particles must possess a self-interaction cross-section per unit mass as large as found in ordinary matter, of order ten centimeters squared per gram of material.

Over the past decade, dozens of cosmological simulations demonstrated that such self-interaction could resolve the small-scale challenges to the popular paradigm of CDM. But why would dark matter interact with itself so strongly? What does its self-interaction entail? Is it a new force of nature?

One recent morning, I noticed a preprint making a strong case for self-interacting dark matter based on the latest data on dwarf galaxies within the Milky Way. This got me thinking about whether there might be a simpler way to explain the self-interaction, and gladly I identified one. The interaction does not require a new force of nature but might merely involve gravity, which we know the dark matter respects because this is the interaction that enabled its discovery in the first place.

I realized that if dark matter is made of objects that weigh ten thousand times the mass of the Sun, then these objects would scatter off each other gravitationally with a cross-section of ten centimeters squared per gram for the characteristic speed of ten kilometers per second in dwarf galaxies. As an added bonus, the cross-section for gravitational scattering declines inversely with velocity to the fourth power, similarly to that of charged particles. This may explain why the self-interaction of dark matter has negligible consequences for clusters of galaxies.

Once I had this thought at 5:15 AM, I started writing a paper with only short breaks for my morning jog and breakfast. The paper was submitted for publication by 2 PM. This was my shortest time lag “from farm to table”.

If the dark matter is indeed organized into massive objects, the question is why? One possibility is that these objects were made primordially through a phase transition in the early universe.

Artemis-I: NASA Has Its Eyes on the Moon as it Preps For Future Mars Missions

Since its discovery in 1933 by Fritz Zwicky, dark matter has represented an unexplained anomaly in our observations of the Universe. Its existence was initially ignored for four decades by the mainstream of science. It is remarkable that this form of matter whose nature is unfamiliar to us, happens to dominate the mass budget of matter in the universe. The experience is similar to finding anomalies in `Oumuamua, the first interstellar object spotted near Earth. Both dark matter and anomalous interstellar objects are unfamiliar but yet abundant. The Universe is richer than our limited terrestrial experience.

To learn from new experiences, we must silence the ego of experts who tend to explain away anomalies based on past knowledge. They often raise dust that prevents everyone else from having a clear view. Once the dust settles, we usually have new insights into our cosmic neighborhood.