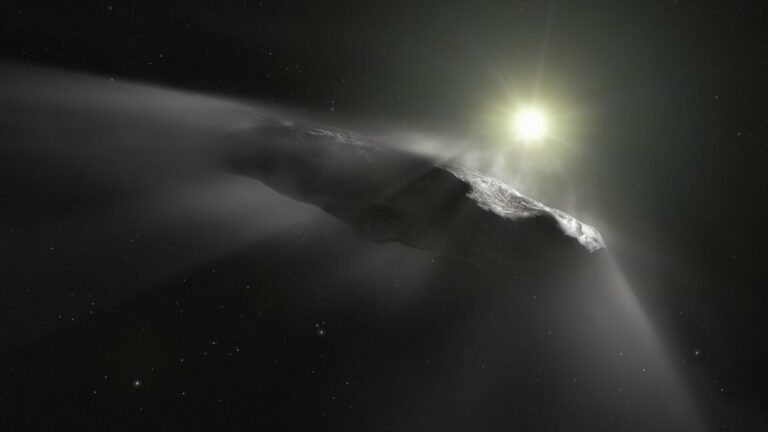 A Meeting with ‘Oumuamua at the Venice Film Festival

On September 3, 2022, the 79th Venice Film Festival hosted a session titled “Meeting with `Oumuamua” at the Excelsior Hotel in Venice in honor of the Italian translation of my book, Extraterrestrial, by the Mondadori Publishing Company.

The Italian Side Academy is a school of excellence, offering courses on animation, visual effects, arts, and games, including digital production, computer graphics, and 3D art with scripting and editing. One of the academy teachers is Sarah Arduini, who won the Oscar in 2017 for the special effects of the film “The Jungle Book“and was the animator of “The Lion King”, “Jurassic World: Fallen Kingdom,” “Star Wars: The Last Jedi,” “Guardians of the Galaxy, Vol. 2”, “Beauty and the Beast” and “The Legend of Tarzan.”

The Side Academy held a special competition inspired by Extraterrestrial, to which 23 film projects were submitted by its first-year students. The winning project was crafted by Francesca Grottola and Riccardo Mori, who imagined the dramatic encounter between the human race and an extraterrestrial civilization caused by the sighting of `Oumuamua. The other top projects selected are the work of Ethan Parussini, who created the character of a boy able to foster contact between Earth and `Oumuamua, and Sara Vukajlovic, for whom `Oumuamua inspired a delightful western tale set at a remote village in the United States.

The fountain of creativity displayed by these young artists was inspiring. It gave me confidence that the future of humanity could be far more ambitious and imaginative than the toxic and superficial backdrop encountered on social media.

As a tribute to the national pride of my Italian hosts, I noted that my suit was made in Italy by the fashion designer Giorgio Armani, to which they replied: “Armani is in the room next to us.” Through an online Q&A session, hosted by Stefano Ferrio and an Italian translator on a stylish background, I addressed the following questions:

What emotion was triggered for you by the appearance of `Oumuamua in the solar system?

My response to the discovery of `Oumuamua was a mix of excitement, surprise, and curiosity. A decade earlier, I co-authored a paper with Amaya Moro-Martin and Ed Turner that forecasted no detection of interstellar rocks by the Pan-STARRS telescope in Hawaii, based on what is known about the Solar system. The more data came about `Oumuamua, the more anomalous it appeared relative to familiar asteroids and comets in the Solar system. When it exhibited a push away from the Sun with no cometary tail and its reflection of sunlight was best fit by a disk-like shape, it occurred to me that perhaps it is a thin light-sail pushed by sunlight.

What scientific hypothesis do you propose at the present time for `Oumuamua?

A couple of years after `Oumuamua’s discovery, the same PanSTARRS telescope discovered another object, 2020 SO, which was pushed by reflecting sunlight and showed no cometary tail. It turned out to be a thin shell of a rocket booster, launched in 1966 by NASA.  It was not constructed as a light sail but simply a thin structure. Given that realization, `Oumuamua could be just a surface layer torn apart from a spacecraft. It could also be a leaflet with a message for our salvation or some thin probe to collect information from the habitable zone of the Sun. To find out what such an object is, we need to get close to it and obtain a high-resolution image of it. As you well know, visual evidence could be key to separating “science” from “fiction”. A single close-up photograph would be worth sixty-six thousand words, the length of my book. I would much rather prefer to publish a photo album of `Oumuamua than a written narrative about its anomalies.

What discoveries do you expect from the new telescopes that humanity is equipped with today?

Our “dating app” for the next `Oumuamua in the sky is the Legacy Survey of Space and Time (LSST) on the Vera Rubin Observatory in Chile, which will start operations within a year. This telescope is equipped with a 3.2-billion-pixel camera that will survey the entire southern sky every 4 days. It will obtain the most detailed video that humanity ever made of the Universe, albeit without a soundtrack. If LSST will identify another anomalous object like `Oumuamua, we will follow up by observing the object with larger telescopes on Earth as well as with the Webb telescope – which is 1.5 million kilometers away from Earth. The additional viewing angle of the distant Webb telescope will offer us a way to measure the 3D trajectory of the object to exquisite precision and determine any forces acting on it other than gravity. This provides the benefit that two separate eyes enable 3D vision instead of the 2D vision offered by one eye. In addition to detecting reflected sunlight, the Webb telescope could also measure the infrared spectrum of the object and assess its surface composition.

In the coming months, we are planning an expedition to collect fragments from the first interstellar meteor, CNEOS 2014-01-08, that I discovered with my student Amir Siraj. The discovery was confirmed by a letter from the US Space Command to NASA. This meteor was tougher than all other 273 meteors in the CNEOS catalog and was moving faster than 95% of all stars in the vicinity of the Sun. This raises the question of whether it was a spacecraft made of an alloy that insentient natural processes do not put together. To analyze the meteor’s composition, we will be scooping the ocean floor near Papua New Guinea.

Do you think that in the future it is possible to have any “contact” or encounter between humanity and an extraterrestrial population?

In my view, our most likely encounter will be with a population of artificial intelligence (AI) devices, which I call “AI astronauts”. Biological systems were selected by natural evolution to live on the surface of planets like the Earth and not to travel for millions of years through the hazardous conditions of interstellar space. AI astronauts may have the patience and material-strength to survive interstellar journeys. And if they are equipped with 3D printers, they could self-replicatejust like biological systems. Potentially, they could also be sentient, in which case universities will establish new departments specializing in “interstellar psychology” to interpret the behavior of these devices after we find them.

Did we already witness AI astronauts? On November 10, 2021, I attended the Ignatius Forum at the Washington National Cathedral, DC. In the Green Room before going on stage, I asked the director of National Intelligence, Avril Haines, who has a bachelor’s degree in theoretical physics: “what is your gut feeling about the nature of the Unidentified Aerial Phenomena (UAP) in your recent report to the US Congress?” She replied: “I don’t know”. Then she went on stage and did not dismiss the possibility that UAP may have arrived “extraterrestrially.” We established the Galileo Project to identify the unidentified.

What message would you like to send about the future that awaits us to young students like those at Side Academy?

My message is simple: what was considered “science fiction” in the past may become “science” in the near future. Never give up on your childhood curiosity. You are defined by your unique passion and not by the number of “likes” you get on social media.