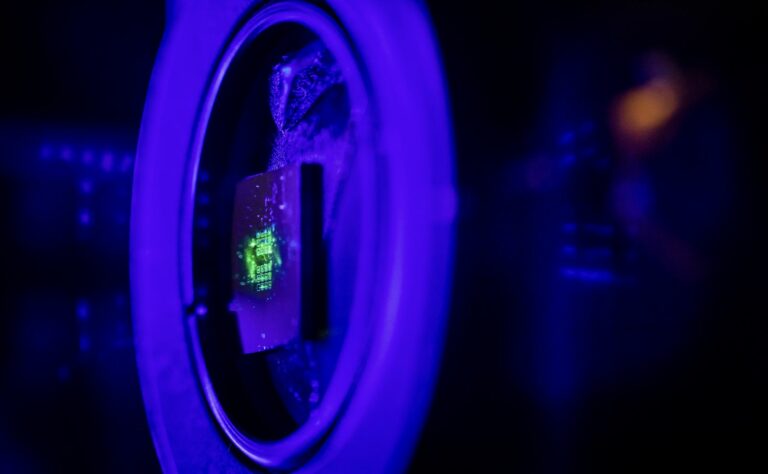 Through the Looking-Glass: Odd New Metasurface Material is a “Doorway” to Strange Quantum Phenomenon

A phenomenon that often accompanies technological innovations involves how they tend to become smaller with their improvement over time. From televisions and communication devices like telephones to computers and microchip components, many of the technologies we use every day occupy a fraction of the space in our homes and offices that their predecessors did just decades ago.

In keeping with this trend, it is no surprise that a new tech developed by scientists at Sandia National Laboratories, in cooperation with the Max Planck Institute for the Science of Light, may soon replace cumbersome technologies than once required an entire room to operate, thanks to an ultrathin invention that could change the future of computation, encryption, and a host of other technologies.

At the heart of the invention and its function is a peculiar phenomenon that has perplexed physicists for decades, known as quantum entanglement.

Entanglement involves particles (photons, in this case) that are linked in such a way that any changes that affect one of them will affect the other. Strangely, the distance between entangled particles does not affect the way such changes occur, a peculiarity first described by Albert Einstein, Boris Podolsky, and Nathan Rosen in 1935, which Einstein called “spooky action at a distance.”

Although physicists have difficulty reconciling this mainstay of the quantum mechanical world with our concepts of classical mechanics, scientists have nonetheless succeeded in tapping the strange phenomenon of entanglement in developing new information technologies, improving encryption technologies, and even correcting errors in the burgeoning field of quantum computing.

Now, the creation of an all-new material by the Sandia Labs and Max Planck Institute team could further improve efforts to harness quantum entanglement in the production of innovative new technologies.

The unique material, called a metasurface, was produced through nano-engineering technologies and will facilitate innovative new ways of entangling photons that previous technologies could not achieve.

In a nutshell, metasurfaces are comprised of arrays of dielectric components (in other words, devices capable of carrying electric force without conduction), which transform groups of optical components into extremely thin films. Such materials can interact with light and other portions of the electromagnetic spectrum in ways vastly different from conventional materials, such as a traditional lens.

Some of these materials are capable of functioning as quantum sources of light, along with other applications that may help facilitate the creation of integrated devices with optical and quantum optical capabilities in the years ahead.

In the case of the newly created metasurface, this material is able to function similar to a “doorway” to the quantum world, through which entanglement can be made accessible—a phenomenon a recent statement likened to Alice stepping through a mirror into an alternate reality in Lewis Carroll’s classic tale “Through the Looking-Glass.” The research team says its new technology works by firing a laser through an extremely thin sheet of glass covered with tiny structures made from gallium arsenide, a dark gray substance whose crystalline structure is commonly used in the production of semiconductive material.

The new material, which is close to one hundred times thinner than a sheet of paper, was the product of initial research that took place at the Department of Energy’s Center for Integrated Nanotechnologies.

Igal Brener, an expert in nonlinear optics and Sandia senior scientist who led the team, explains that pairs of entangled photons at different wavelengths occasionally are produced from the sample, which move in the same direction as the laser the researchers beamed through the glass.

“It scrambles all the optical fields,” Brener said in a statement, adding that the device is designed to produce not just pairs of photons but entire webs of entangled particles, known as multi-entanglement, the likes of which are required in some of the more complicated information processing technologies being innovated today.

In years past, one of the only methods of producing similar results involved the use of multiple lasers paired with special crystals and other optical equipment uniquely tailored for such purposes, all of which required large amounts of space. While smaller-scale technologies already exist that are capable of producing photon entanglement, these devices have not been able to achieve multi-entanglement.

According to Brener, multi-entanglement is achieved once more than two or three pairs of entangled photons are produced. Fortunately, the new metasurface technology the Sandia Labs team has succeeded in producing is able to garner such results in a much smaller space than past equipment would have required.

“These nonlinear metasurfaces essentially achieve this task in one sample when before it would have required incredibly complex optical setups,” Brener said in a statement.

Middle Aged Men Most Likely to Die from Sex

Among the possible drawbacks of the new metasurface material is that although multi-entanglement can be achieved, its rate of production is lower than other existing techniques, making it slightly less efficient by comparison.

Although the technology still requires some fine-tuning, the prospects for their future use are already evident, according to Brener.

“Those types of metasurfaces will revolutionize consumer products,” Brener says.

The team’s paper, “Resonant metasurfaces for generating complex quantum states,” was recently published in Science. The research effort was led by Maria Chekhova, a physicist at the Max Planck Institute for the Science of Light whose expertise is in the quantum entanglement of photons, and Tomas Santiago-Cruz, the first author of a recently published paper detailing the team’s findings. Additional contributors along with Brener were co-authors Sylvain D. Gennaro, Oleg Mitrofanov, Sadhvika Addamane, and John Reno.

Through the combination of tiny sources of quantum light with new technologies such as those the team has produced, Santiago-Cruz says that the possibilities for the future of quantum optical technologies are very promising.

“Metasurfaces are leading to a paradigm shift in quantum optics,” he says.