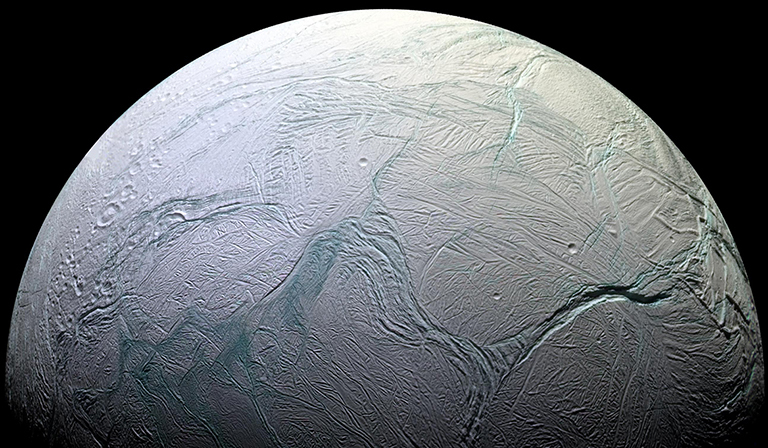 New research on Saturn’s moon Enceladus shows there is a good chance that life may exist in its subsurface oceans. Previously, NASA’s Cassini flyby mission had revealed that Enceladus periodically blasts a massive plume of water vapor into the atmosphere, confirming that there is a large body of water underneath the moon’s icy shell. However, spectral analysis of that water vapor indicated that one key ingredient for life may be missing: phosphorous.

Now, researchers modeling the environment within this massive subsurface ocean say that not only do they believe phosphorus exits on Enceladus, but it is likely in the right concentrations to support earthlike aquatic life.

Until the 21st century, researchers had no direct evidence that Enceladus possessed an ocean hiding beneath its planet-wide blanket of ice. Then in 2005, NASA’s Cassini probe snapped a series of images, including a massive water plume shooting through the icy cracks and launching into space. Spectral analysis of that water plume revealed its chemical composition, revealing that it had almost all of the key ingredients needed to support life. Almost.

“What we have learned is that the plume contains almost all the basic requirements of life as we know it,” said the study’s co-author, Southwest Research Institute’s Dr. Christopher Glein, in a released statement. “While the bioessential element phosphorus has yet to be identified directly, our team discovered evidence for its availability in the ocean beneath the moon’s icy crust.”

This lack of phosphorus motivated Glein and his team of research partners to see if the life-giving compound could exist and was just missing from this particular plume or if Enceladus’ ocean was not entirely habitable after all.

“The quest for extraterrestrial habitability in the solar system has shifted focus, as we now look for the building blocks for life, including organic molecules, ammonia, sulfur-bearing compounds as well as the chemical energy needed to support life,” Glein explained. “Phosphorus presents an interesting case because previous work suggested that it might be scarce in the ocean of Enceladus, which would dim the prospects for life.”

To determine if phosphorus is available and in the right amounts to support life, Glein and his team formed computer models of the icy moon to simulate how and if phosphorus would be produced. This work led to the development of geochemical models that show how minerals on the seafloor dissolve in Enceladus’s ocean. And to their pleasant surprise, the team’s models revealed that Enceladus should not only have phosphorus, but it is practically inevitable that the compound is present in ample enough amounts to support biological extraterrestrial life.

“The underlying geochemistry has an elegant simplicity that makes the presence of dissolved phosphorus inevitable, reaching levels close to or even higher than those in modern Earth seawater,” said Glein. “What this means for astrobiology is that we can be more confident than before that the ocean of Enceladus is habitable.”

Another Mission Needed to Determine if Habitable Ocean is Inhabited

The researchers are quick to point out that their models were developed from data captured by Cassini and that this type of data s crucial to understanding how life may form on other planets or moons.

“Enceladus is one of the prime targets in humanity’s search for life in our solar system,” said Glein. “In the years since NASA’s Cassini spacecraft visited the Saturn system, we have been repeatedly blown away by the discoveries made possible by the collected data.”

Glein also notes that his team’s work is just a first critical step and that there is only one way to determine if life exists in the oceans of Enceladus.

“We need to get back to Enceladus to see if a habitable ocean is actually inhabited,” he said.