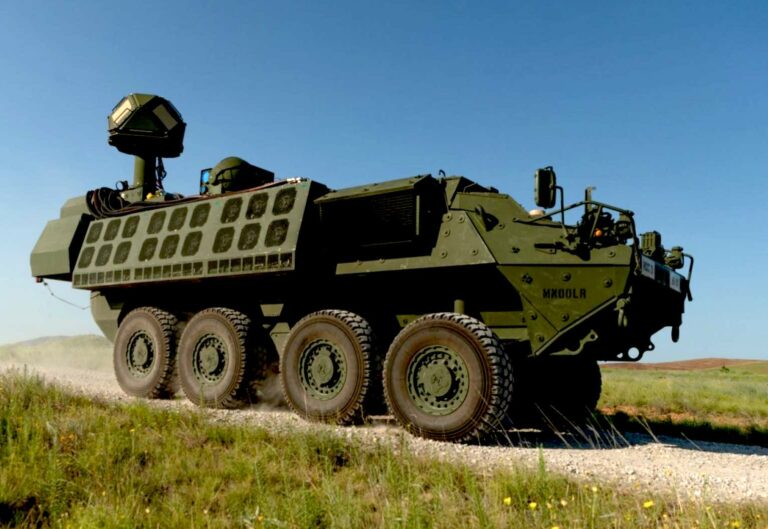 After years of testing and development, the U.S. Army is finally ready to deploy a Stryker-mounted combat laser. Designed to safeguard troops from a range of aerial threats, the new combat laser is the first to be mounted and deployed on a combat-ready Stryker vehicle.

Back in August, Lt. Gen. Neil Thurgood, head of the Army’s Rapid Capabilities and Critical Technologies Office, told attendees of the Space and Missile Defense Symposium in Huntsville, Ala., that the Army had finished preparations for mounting a relatively robust 50 kW combat laser onto a Stryker vehicle, with the first official deployment expected to happen in about 6 weeks. Specifically, the General said that the first battery of Directed Energy-Maneuver Short-Range Air Defense (DE M-SHORAD) weapons will be part of an air defense battery at Fort Sill, Oklahoma, sometime near the end of September.

Now six weeks later, there appears to be nothing stopping the Army from making good on the Generals’ promise. In fact, the Army says they are also planning to mount a smaller combat laser (20 kW) onto infantry squad vehicles, offering troops similar protection against small to medium-sized drones.

The main difference between the two combat lasers is the power, as the added oomph provided by the 50 kW laser increases the number of threats it can handle. For example, the 20 kW infantry squad laser is tasked to guard against small to medium-sized (group one and two) drones, ranging from 20lbs up to 1,300+ pounds. Such vehicles represent an ever-increasing threat on the modern battlefield as they are cheap, easy to use, and readily available. However, the larger 50kW laser has been successfully tested against massive, military-grade group 3 drones (over 1,320 pounds), as well as mortars, rockets, and even some missiles.

Currently, troops use conventional weapons to combat the increased use of drones and other low-cost aerial platforms, but those methods are often costly and require the transporting of anti-drone or anti-missile weapons and their ammunition. For example, when deploying their anti-drone/anti-missile laser Iron Beam, the Israeli military noted that anti-missile munitions can cost as much as $150,000 a shot. On the other hand, combat lasers don’t require conventional ammunition, meaning each shot costs as little as a few dollars.

Surprisingly, Gen. Thurgood said that the two combat lasers being readied for deployment essentially follow the same tactics, techniques, and procedures (TTPs) as conventional weapons, with one significant difference.

This move by the Army is particularly significant and follows on the heels of some pretty impressive tests of anti-drone and anti-missile combat lasers by the United States Air Force and the United States Navy. The Army also recently announced that they had received delivery of an ultra-powerful combat laser from Lockheed Martin. Rated at a fire-breathing 300 kW of pure power, that laser is expected to go through a battery of tests and refinements before making its way to troops.

Still, the imminent deployment of the 50 kW Stryker-mounted laser represents the first step in what is likely to be a wave of combat lasers and other directed energy weapons actually moving out of the testing phase and into the field. In fact, the Army says that the smaller 20 kW laser is expected to reach infantry squad vehicles by the end of the 2023 Fiscal year.

“This is the first combat application of lasers for a maneuver element in the Army,” said Thurgood when the Army delivered the first platoon of combat laser-equipped Stryker vehicles to the Directed Energy-Maneuver Short-Range Air Defense (DE M-SHORAD) Combat Shoot-Off last summer. “The technology we have today is ready. This is a gateway to the future.”