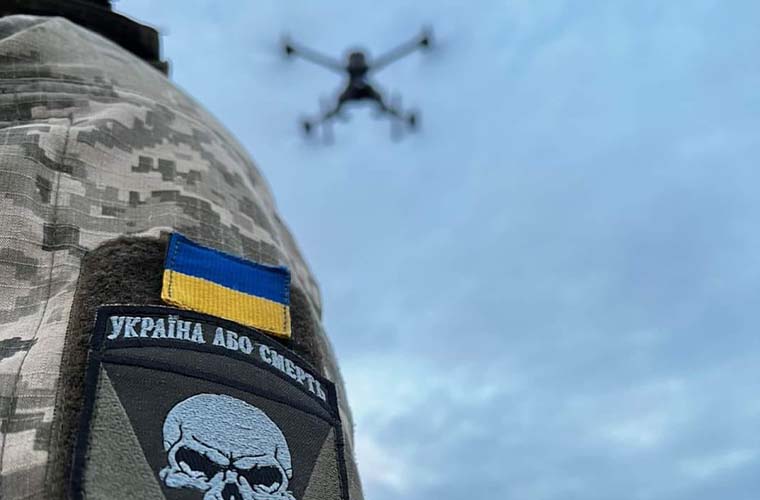 In a surprising moment of candidness, Russia’s Ministry of Defense has admitted that the Russian industry cannot produce military-grade unmanned aerial vehicles (UAV) because of material shortages.

“The Ministry of Defense has developed the appropriate tactical and technical requirements for unmanned aerial vehicles. And most manufacturers, unfortunately, are not able to fulfill them,” said Russian Colonel Igor Ischuck during a roundtable discussion this week on the Prospects for the development of unmanned vehicle technologies in the Russian Federation.

“And the main problem of non-fulfillment is the material base.”

Col. Ischuck never specifically discussed what was causing the Russian industry to suffer material shortages. However, in early September, the United Kingdom’s Ministry of Defense (MoD) reported Russia was “struggling to maintain stocks of UAVs, exacerbated by component shortages resulting from international sanctions.”

In response to Russia’s ongoing invasion of Ukraine, more than 30 nations have imposed sanctions on Russia, including restrictions on energy imports, financial transactions, and halting shipments of semiconductors and other electronics critical for manufacturing military-grade UAVs.

So as President Vladimir V. Putin is expected to declare that nearly 40,000 square miles of occupied eastern and southern Ukraine are now part of Russia, the Kremlin doesn’t appear to have any real viable options for recovering staggering losses of military equipment, including military-grade UAVs.

According to Col. Ischuck, Russia’s MoD has been “forced to go for simplification and additional agreements to meet the critical need for surveillance drones.”

Col. Ischuck’s mention of needing to go for “simplification” is pretty remarkable, given that some of Russia’s existing military drones are surprisingly crude and unsophisticated.

Photographs provided to The Debrief of a downed Orlan-10 revealed the imaging system for Russia’s primary surveillance and reconnaissance drone was a 7-year-old Canon EOS 750D off-the-shelf consumer camera. No longer in production, a used version of the same camera can be purchased for roughly $400- $500.

Other videos posted online have shown other downed Orlan-10 drones similarly outfitted with generic handheld Canon DSLR cameras, held in place by adhesive tape. Super-glue is apparently used on the camera’s main dials to prevent aperture-Priority and Shutter-Priority modes from being changed.

Only a thin sheet of foil attached to the tail by double-sided tape appears to shield the drone’s navigation system from counter-UAV electronic warfare systems.

In a video posted by the Ukrainian Ministry of Defense, a Ukrainian soldier dissecting a captured Orlan-10 points out that the drone’s fuel tank appears to have been made from the top and lid of a plastic water bottle.

“This is seriously real, not fake,” says the soldier. “We even thought of sending this ‘cosmic’ technology to our Western partners.”

Components for the Orlan-10 primarily come from Western nations and their allies. All of which are now unavailable thanks to sanctions.

China is the most likely place for Russia to turn for suitable parts to manufacture or replace drone systems.

Moscow has, in fact, already been trying to move away from the Western technology sector ever since first facing international sanctions following its initial invasion of Ukraine and annexation of Crimea in 2014. In 2021, China accounted for 72% of Russian imports of computers and telecommunications equipment and 56% of semiconductors.

However, it remains unclear how much Beijing will be willing to risk to help supply Moscow’s war machine.

The U.S. has warned China it will face consequences if it decides to help Russia circumvent sanctions. Nearly 40% of China’s exports go to NATO countries or strong U.S. allies like Japan and South Korea. Meanwhile, Russia only accounts for 2% of China’s total trade.

To put it simply, Beijing stands far more to lose if it were to face Western sanctions than it does to gain from increased trade with Russia.

Likewise, some foreign policy scholars argue that Russia’s invasion of Ukraine has already caused significant headaches for China by disrupting billions of dollars worth of Chinese trade and causing lots of international focus on Beijing’s ambitions for Taiwan.

Equally, the Kremlin appears keen on avoiding becoming more beholden to China than it already has. In June, Putin ordered his Foreign Intelligence Service to devise ways to obtain technology resources, including using gray schemes.

Though Moscow may face difficulties replacing military-grade drones, inexpensive consumer drones have become a prominent feature on the battlefields in Ukraine.

Since being invaded in late February, Ukraine has stood up a veritable “drone army,” training soldiers to use commercial quadcopters for everything from surveillance and reconnaissance to drones rigged to drop grenades on unsuspecting Russian troops.

Ukraine is training around 400 new troops monthly to be drone operators through several dedicated schools.

However, unlike Ukraine, Russian industry doesn’t have the benefit of being able to repurpose commercial drones to meet its military needs.

In June, Russian state media reported that stocks of retail and consumer drones had been all but depleted by mass purchases for Russian forces already fighting in Ukraine.

Adding to Moscow’s UAV problems, the Chinese technology company and the world’s largest producer of consumer drones, DJI, halted all sales of UAV products to both Ukraine and Russia in April. Before the embargo, DJI accounted for 90% of all drone sales in Russia.

And while DJI’s ban also affects Ukraine, European and American allies can offer Kyiv a near-unlimited pipeline of commercial and military-grade drones. In fact, as previously reported by The Debrief, Ukraine is getting better and more capable UAVs from its Western allies.

As of September 30, the open-source intelligence site Oryx has confirmed 133 Russian drone losses, including 66 destroyed and 67 captured, via visual evidence from photos and videos posted online. However, the Ukrainian Ministry of Defense has claimed that 1003 UAVs, 264 planes, and 255 helicopters have been downed during the same period.

It’s impossible to tell precisely how many UAVs Russia has lost in its seven months of war. However, its overall material losses have been staggering.

Russia May Leave the International Space Station to Build Its Own

In mid-July, Russia was forced to turn to Iran for help recovering its losses of UAVs. This is likely the “additional agreements” recently mentioned by Col. Ischuck.

Iran has reportedly agreed to provide “hundreds” of UAVs to Russia for use in its ongoing war.

It’s unclear exactly how many UAVs Russia plans to purchase from the Islamic Republic. However, Iranian Shahed-136 “kamikaze drones” and Mohajer-6 drones, capable of performing ISTAR and strike missions, began appearing in the skies over Ukraine in early September.

The Shahed-136 has since become Russia’s primary aerial strike platform. The loitering munition has been used to carry out several strikes on the southern port city of Odesa, which until recently, had been relatively quiet for months.

The Shahed-136 has effectively provided Russia with a new way to challenge Ukraine’s military. However, the drones are essentially relatively cheap, flying bombs designed to loiter in an airspace and attack ground targets.

Because of their inherent one-time use, Moscow’s purchase of Iranian loitering munitions is merely a temporary stopgap fix rather than a long-term solution to its UAV deficiencies.

Kyiv has also proposed offering downed systems to other neutral nations as a unique way to counter Russian-operated Iranian drones.

“We turned to our partners, in particular, those who are afraid to give us weapons but still have good expertise. I told them: ‘We will give you their [Iranian drones’] parts; examine them and give us the suppression systems,” Ukraine’s Minister of Defense Oleskii Reznikov recently told Interfax-Ukraine. “And a number of countries that did not want to give [us] weapons became interested in this proposal.”

Though Reznikov didn’t specifically mention what nations Ukraine had spoken with, it is highly likely that Israel is one of them.

In trying to precariously balance its ties with both Russia and Ukraine, Israel has so far refused to provide military aid to Kyiv. However, as the sworn enemy of Tehran, Israel might now see the benefit in helping Ukraine bring down Iranian drones.

Ultimately, by acknowledging that Russian industry cannot produce military-grade drones, the Kremlin simply said what most military analysts already knew. However, the fact they said it out loud is surprising.

For months and even amidst stunning losses from recent Ukrainian counter-offensives, the Kremlin has repeatedly maintained the mantra that “everything is going according to plan.”

That said, since Putin announced “partial mobilization” on September 21, there has been a surprising “glasnost” in Russia, with typically ardent pro-Kremlin mouthpieces being more open and critical about the situation in Ukraine.

“It’s worrisome, truly worrisome. There hasn’t been a single operation after Kharkiv. Nor have there been any returned or added territories,” Russia’s top propagandist, Vladimir Solovyov, recently bemoaned on Russian-state TV. “The whole West is starting to mock us.”

The move will effectively “burn the boats” and bind Russians further to the ongoing war. However, it will do nothing to help solve the material and economic shortcomings plaguing the Russian industry.