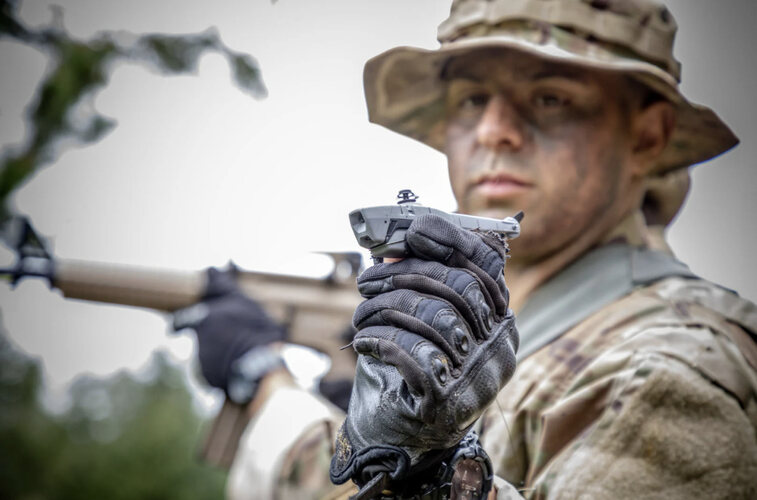 The Norwegian Government Security and Service Organization (GSSO) has announced that Norway and Great Britain will jointly supply Ukraine with an unspecified number of “Black Hornet” military micro-drones, described as a “spy plane that fits in your hand,” to aid in its on-going war with Russia.

Manufactured by Prox Dynamics of Norway, which was acquired by FLIR Systems in 2016, the Black Hornet measures around 4 x 1 inch from tip to tail, with a 4-inch rotor span, and only weighs 16 grams, making it the smallest operational military micro-drone in the world.

First developed in 2010, the micro-drone, whose full name is the PD-100 Black Hornet PRS, is outfitted with a pivoting electro-optical and infrared sensor, allowing for night-vision and day-video capabilities. The micro-drone can transmit live video or high-resolution still images via a digital data link to a ground station just under a mile away.

The Black Hornet has a maximum flight of 25 minutes. However, the system includes two micro-drones, which are housed, launched, and recharged in a single ground station, meaning while one Black Hornet is in flight, another is charging. By rotating the two micro-drones, troops in the field could effectively maintain constant aerial reconnaissance of an area for hours.

The Black Hornet can be remotely controlled or fly autonomously using pre-programmed waypoints. A GPS receiver and sensors in the micro-drone measure yaw rate, acceleration, and air pressure to ensure flight stability. If there is a loss of data transmission or battery levels become critically low, the Black Hornet will automatically return to the location it was launched.

The entire drone system, including two micro-drones, and ground station with external display and controller, only weighs roughly 2 lbs.

19 NATO-allied countries, including the United States, United Kingdom, France, Germany, Australia, and Turkey, presently operate the Black Hornet. Reportedly, the micro-drone has already proved itself in combat, being used for covert surveillance by U.K. and U.S. special operations teams in Afghanistan.

It’s unknown when the Black Hornet will make its appearance in Ukraine. However, the “nearly silent” and virtually undetectable micro-drone will likely prove an invaluable covert reconnaissance asset to Kyiv’s ground forces.

“The Norwegian-developed drone is a global market leader. It is used in a number of allied countries, including the United States and Great Britain,” said Norway’s Defense Minister Bjørn Arild Gram. “It is easy to operate, robust, difficult to detect, and particularly well suited for combat in urban areas.”

According to GSSO, the total donation package from Norway and Great Britain will cost $9.2 million, including Black Hornet units, spare parts, transportation, and training.

Unlike the vast majority of Western aid, the micro-drones are being purchased directly from Flir through a British-led fund established to buy military equipment for Ukraine.

“The donation marks that we stand by our commitment to continue supporting Ukraine, but it also entails a new direction for how Western countries support their fight,” said Gram. “Until now, we and our allies have mostly donated from our own stocks.”

“Norway and the U.K. remain determined to stand shoulder-to-shoulder with Ukraine,” said U.K. Defense Secretary Ben Wallace. “These cutting-edge drones will help give Ukraine’s troops a vital advantage on the battlefield as they fight to defend their country against Putin’s brutal and unprovoked invasion.”