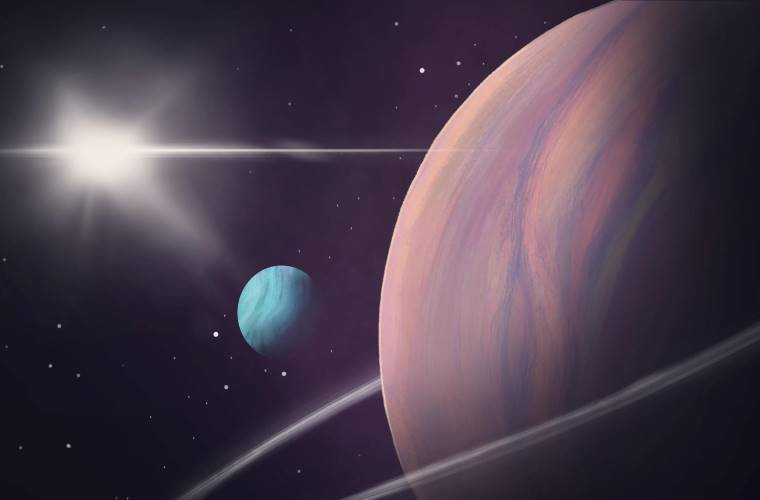 
Discovery May Mean Exomoons are Common, Increasing the Odds of Extraterrestrial Life.

Astronomers studying a huge, Jupiter-like exoplanet say they have successfully detected a moon in its orbit. Although this is only the second such “exomoon” spotted thus far, the location and overall circumstances of the find supports the idea that exomoons may be incredibly common throughout the cosmos, which would dramatically increase the odds of finding extraterrestrial life.

Before 1995, planets orbiting other stars beyond our own were purely theoretical in nature. Almost thirty years later, thousands of such planets have been spotted, including some that may host extraterrestrial life.

Since telescopes like Hubble and Kepler are unable to image these faint space bodies directly, spotting exoplanets involves measuring light from their host stars. The most common is called the transit method, where any planet passing in front of its host star causes enough dimming for our telescopes to measure the difference and infer a planet’s presence.

In 2017, a team of astronomers from Columbia University used this same method to spot a moon orbiting one of these exoplanets, a space body quickly dubbed an exomoon. Now, those same researchers have used the transit method to spot what they think is yet another exomoon.

“Astronomers have found more than 10,000 exoplanet candidates so far, but exomoons are far more challenging,” said David Kipping, head of the Columbia University team involved in both exomoon discoveries, in a press release announcing this latest find. “They are terra incognita.”

According to the press release, “Exomoons fascinate astronomers for the same reasons that exoplanets do. They have the potential to reveal how and where life may have emerged in the universe.”

The same release notes that astronomers are eager to know how such exomoons form, “if they can sustain life, and what role, if any, they play in making their host planets habitable.”

To make their newest find, Kipping teamed up with astronomers from NASA, MIT, CalTech, UCLA and others to study exoplanets that are massive gas giants like Jupiter and Saturn, mainly because those two planets have over 100 moons between them. The team also focused on cold gas giants that were far away from their host stars, where the effect of the star’s gravity should not be enough to strip these gas giants of their exomoons. And what they found seems to indicate they were looking in the right place.

“The team spotted the giant exomoon candidate orbiting the planet Kepler 1708b, a world 5,500 light-years from Earth in the direction of the Cygna and Lyra constellations,” the press release explains. “This new candidate is about a third smaller than the Neptune-sized moon that Kipping and his colleagues earlier found orbiting a similar Jupiter-sized planet, Kepler 1625b.”

To make the find, the team used data captured by Kepler, offering a total of 70 planetary candidates that might host exomoons. After thorough analysis, the other 69 showed no signs of exomoons, but the final candidate, known as Kepler 1708b, showed a signal.

“It’s a stubborn signal,” said Kipping. “We threw the kitchen sink at this thing, but it just won’t go away.”

Doctors Can 3D Print Bones Directly Into Your Body

Like their original exomoon find, the researchers believe Kepler 1708b’s companion is also a gaseous moon, much like its host planet. So, even though it does reside within its host star’s habitable zone, an orbit where liquid water could exist on the planet’s surface, the gaseous nature of the exomoon and its host planet means that finding life here is extremely unlikely.

The team behind the discovery notes that it will likely take years to confirm the signal is indeed an exomoon. In fact, their original 2017 discovery is still hotly contested, with some astronomers saying it may not be an exomoon at all. Still, there is some excitement about this latest find, especially what it may mean.

“If confirmed, the sighting could mean that exomoons are as common in the universe as exoplanets,” the press release notes, “and that big or small, such moons are a feature of planetary systems.”

Fortunately for researchers, the recently launched James Webb telescope is about to come online, providing those searching for exoplanets and exomoons alike a powerful new tool to conduct their research.