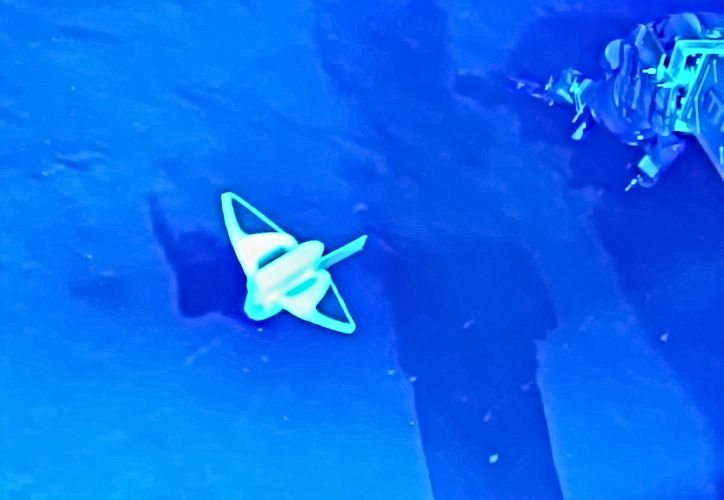 New “Soft Robot” Conquers The Deepest Part of the Ocean

Researchers in China have successfully tested a soft robot that swims like a manta ray in the Mariana Trench, the deepest part of the Pacific Ocean, reaching a hull-crushing depth of 10,900 meters. With results published in the journal Nature, the test is a huge accomplishment for the team and sets up the possibility of using robots to explore parts of the ocean that have been unreachable.

“The deep sea remains the largest unknown territory on Earth because it is so difficult to explore,” the study states. “Owing to the extremely high pressure in the deep sea, rigid vessels and pressure-compensation systems are typically required to protect mechatronic systems. However, deep-sea creatures that lack bulky or heavy pressure-tolerant systems can thrive at extreme depths.”

Background: What is a “Soft Robot?”

According to the study, the team set out to “develop an untethered soft robot for deep-sea exploration, with onboard power, control, and actuation protected from pressure” by integrating electronics in a silicone matrix. This design, the study further explains, “eliminates the requirement for any rigid vessel.”

To accomplish this goal, the researchers had two main requirements. Find a structure that can withstand those massive pressures, especially on the electronic components and one that could propel itself through the depths.

Analysis: How to Avoid Getting Crushed in the Mariana Trench

For inspiration, they looked to the hadal snailfish (Pseudoliparis swirei), which famously lives and thrives at these extremely deep regions of the Pacific. Then, to mimic the snailfish’s motion, they built a body and wings out of a soft elastomer.

Next, as the article in Nature that accompanied the study explains, “the authors used a well-established mechanism to drive [the] flapping. The fins are attached to ‘muscles’ on the robot’s body; these are made of a soft material that converts electrical energy into mechanical work — when an electric current from the robot’s battery is applied to the muscles, they contract.”

This results in the robot’s forward motion, the study explains, because “tiny solid structures mechanically connect the contracting muscles to the fins, making them flap.”

Still, for their robot to work, the researchers also needed electronics to withstand the extreme pressures found at these depths. To accomplish this, the team decentralized “the electronics by increasing the distance between components or separating them from the printed circuit board.”

“Laboratory tests and simulations demonstrated that this arrangement reduces the stress at the interfaces between components under pressure,” the study authors note.

The team also stated that this method is cheaper and more practical than current methods for protecting electronics at depth.

Following the successful tests in the lab, and then another test in a nearby lake, the team put the robot through its paces in the South China Sea, reaching a depth of 3,224 meters, where the robot swam freely without issue or damage.

Next, they traveled to the Mariana Trench, the single largest obstacle available to determine just how robust their body and electronics were. This involved attaching the robot to a larger drone for the descent, allowing the winged robot to try a few strokes while the carrier drone filmed the test. As with the runs in the lab, the lake, and the China Sea, the Mariana Trench test was also a success.

Outlook: Soft Robots Are the Future?

“Our work highlights the potential of designing soft, lightweight devices for use in extreme conditions,” the study authors conclude while also noting a considerable number of advantages to flexible robots in general. “Soft robots are intrinsically safer than their conventional rigid counterparts in interactions with humans, and their pliability can boost many capabilities — such as their dexterity when manipulating objects and their ability to squeeze into tight spaces or to travel across uneven surfaces.”

They also note that soft robotic grippers offer substantial advantages over rigid grasping devices when gathering up delicate sea organisms for study, squeezing into tight spaces, or traveling uneven terrain. And, they point out, these types of bio-inspired robotic fishes “can swim among other animals without distressing them, thereby allowing close-up study.”

The team expressed there is still more work to be done before this type of robot is commonplace. For instance, their robot “is slower than previously reported underwater robots, and cannot withstand sizeable disturbances — it could easily be swept away by underwater currents.”

In the end, it may still be a while before winged robots are swimming into deep-sea caves, cruising with a pod of whales, doing research on underwater cables, excavating shipwrecks, or even taking a close-up look at a glowing shark. But given the impressive results already achieved, it may not be that far in the future after all.