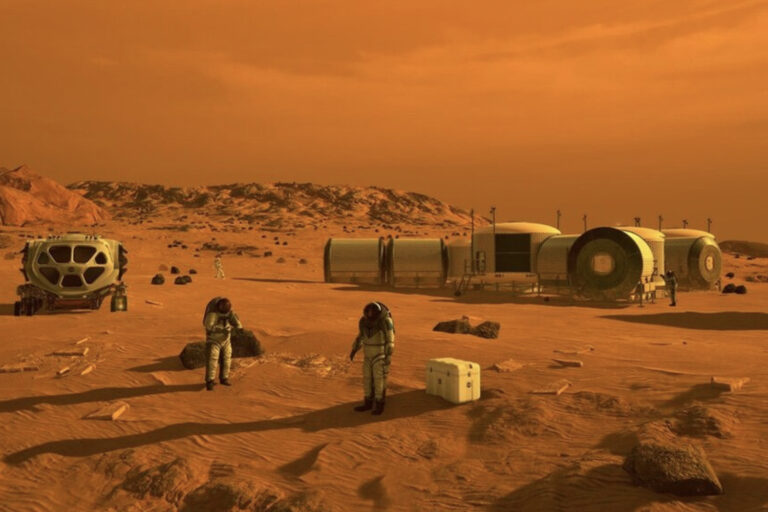 There is no gas station on Mars, meaning that all planned sample return missions, as well as those hoping to send future astronauts to Mars (and also bring them back to Earth), will need to carry their own rocket fuel. Estimates place the cost of the 30 tons of methane and liquid oxygen needed to leave the surface of Mars at around $8 billion, making the concept of toting fuel for each and every mission particularly cost-prohibitive.

To address this roadblock, researchers from Georgia Tech University funded by a NASA Innovative Advanced Concepts (NIAC) Award have proposed a method of creating biofuel on Mars using only sunlight, carbon dioxide, and frozen water, all of which are in great supply on the red planet’s surface.

“Carbon dioxide is one of the only resources available on Mars,” said Nick Kruyer, the first author of the study, a recent Ph.D. recipient from Georgia Tech’s School of Chemical and Biomolecular Engineering (ChBE), in a press release announcing the team’s research. “Knowing that biology is especially good at converting CO2 into useful products makes it a good fit for creating rocket fuel.”

Background: A Matter of Chemistry

To see if their proposed process was viable, and if it indeed resulted in a reduction of energy costs, Kruyer teamed up with experts from across the Georgia Tech campus. According to the same press release, this meant bringing together chemical, mechanical, and aerospace engineers and matching them up with laboratory-trained chemists, all to tackle the various issues with developing this type of fuel on Mars.

“You need a lot less energy for lift-off on Mars, which gave us the flexibility to consider different chemicals that aren’t designed for rocket launch on Earth,” said Pamela Peralta-Yahya, one of the study’s corresponding authors and an associate professor in the School of Chemistry & Biochemistry. “We started to consider ways to take advantage of the planet’s lower gravity and lack of oxygen to create solutions that aren’t relevant for Earth launches.”

Ultimately the team zeroed in on a type of biomaterial known as 2,3-butanediol that is already made on Earth in the production of rubber, and one that can be made from the materials found on the Mars surface.

“2,3-butanediol has been around for a long time, but we never thought about using it as a propellant,” said Wenting Sun, an associate professor who works on fuels in the Daniel Guggenheim School of Aerospace Engineering. “After analysis and preliminary experimental study, we realized that it is actually a good candidate.”

Detailed in the journal Nature Communications, the Georgia Tech team’s proposed process would require astronauts to bring along a small number of cyanobacteria (algae) that are capable of pulling CO2 from the Martian atmosphere and converting it to sugars using only the power of sunlight. This photosynthetic process would occur in photobioreactors the size of four football fields which would be built from plastic material shipped ahead of time.

Once the algae finish converting the Carbon Dioxide into sugars–an engineered E. coli bacteria–which would also be brought from Earth, it can then convert those same sugars into 2.3-butanediol, a theoretical propellant with enough power to launch ships from Mars back into space.

As noted, this proposed process requires some specialized equipment including those bulky photobioreactors that add significantly to the cost of interplanetary shipping, so the same Georgia Tech researchers are already working on a method to improve the speed at which cyanobacteria grow on Mars. Still, they note, not enough of this type of work has been done on the Martian surface, so the team is not completely sure how effective their process will be at first.

“We also need to perform experiments to demonstrate that cyanobacteria can be grown in Martian conditions,” explained Professor Matthew Realff, who works on algae-based process analysis. “We need to consider the difference in the solar spectrum on Mars both due to the distance from the Sun and lack of atmospheric filtering of the sunlight. High ultraviolet levels could damage the cyanobacteria.”

In the study’s conclusion, the team points out that their process uses 32% less power than the leading proposed strategy of shipping methane from Earth and producing oxygen via chemical catalysis from the water ice on Mars. But, they concede, it also requires 3 times the weight budget to transport the four football-field-sized bioreactors from Earth. However, they point out, once the reactors are on-site, they can be used over and over again, making shipping them to Mars a one-time cost.

Another benefit to their process, the team notes, is the surplus oxygen, namely 44 tons of it, generated during their process. Such oxygen, they point out, can be used for other types of fuel production, or even for things like growing food and human habitation.

“The Peralta-Yahya lab excels at finding new and exciting applications for synthetic biology and biotechnology, tackling exciting problems in sustainability,” concluded Kruyer. “Application of biotechnology on Mars is a perfect way to make use of limited available resources with minimal starting materials.”