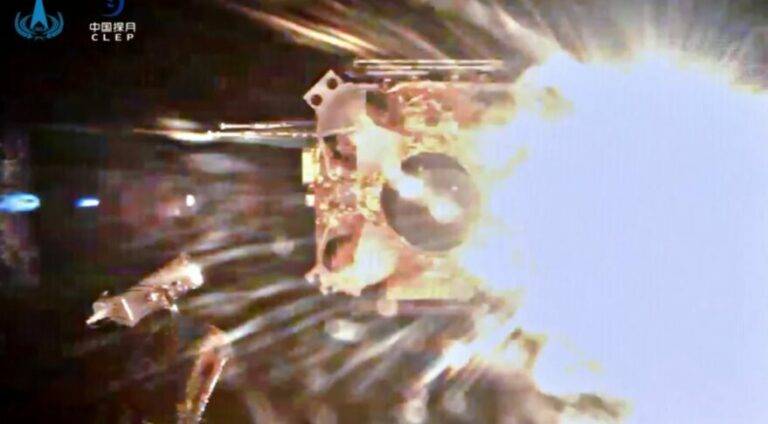 
China's Chang'e-5 lunar lander's ascent vehicle is bringing back the first lunar soil samples to be collected since the 1970s.

Chinese state news agency Xinhua has confirmed yesterday afternoon that the Chang’e-5 lunar lander’s ascent vehicle is on its way back to Earth with the first lunar soil samples to be collected since the mid-1970s. When the craft returns home, it will solidify China as just the third country in history to retrieve lunar samples, behind the U.S. and the as-then Soviet Union.

BACKGROUND: What did Chang’e-5 Accomplish?

The spacecraft landed on Earth’s nearest satellite on Tuesday around the western edge of the near side of the Moon in the hopes that the samples gathered will shed new light on the origins and evolution of our lunar neighbor.

The craft launched on November 23 from the Wenchang Space Launch Site in China’s Hainan Province, taking almost ten days to arrive at its destination.

Just hours after landing, the lunar vehicle’s robotic arms began scooping up samples from the gravel-like surface. The last time this was done was when the U.S. brought back hundreds of pounds of lunar material throughout the 1960s and 1970s. The Soviet Union was also able to pull off a robotic mission—similar to Chang’e-5—despite having far less advanced technology at their disposal in 1976.

ANALYSIS: Chang’e-5 and Her Successful Mission

The lander reportedly set down in Mons Rumker—a colossal basalt lava plain that is said to be billions of years younger than the lunar rocks retrieved by the Apollo astronauts during the 1970s.

Moon samples are not the only material of interest to the Chinese mission. The lunar lander was also able to shoot back color photos of the Moon’s surface, and they are reportedly much more beige than one might have otherwise thought.


Novel Process May Lead to Treatments for Severe Mental Illness

Chang’e-5 was able to snap off several photos that were later stitched back together into an impressive panorama that may change the way people usually think about the color of the Moon.

The surface of our lunar neighbor can change dramatically depending on the way sunlight reflects off its surface. The Apollo astronauts described several different colors, ranging from “chocolate brown” on the day said to a “pale blue” on the night side.

The return journey is estimated to take just shy of two weeks, with a safe landing expected in inner Mongolia around December 16 or 17. With the recent acquisition of the soil samples that are billions of years younger than anything scientists currently have at their disposal, it is possible that they may be closer to understanding the exact nature and origin of our nearest celestial body.