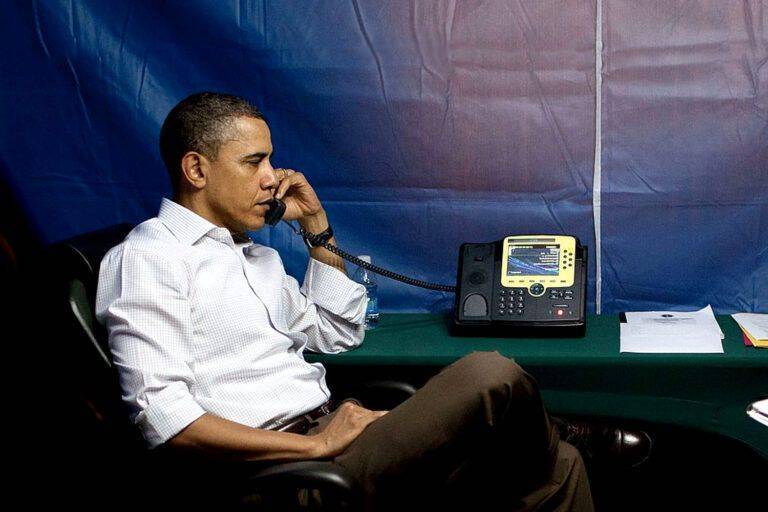 
The 44th President of the United States recently defended the use of drones in military operations while he was in office, and keeps us guessing about UFO briefings.

In a recent interview for The Late Show with Stephen Colbert, former president Barack Obama discussed his new memoir, A Promised Land, and reflected on how his time as a Senator contrasted with his years in the Oval Office.

During the interview, Obama was also asked about the controversial use of drones during his administration, as well as Guantanamo Bay, and whether he sought information from intelligence agencies about unidentified aerial phenomena, or UFOs.

“There were a couple of times…. particularly around counterterrorism issues, where I think it is different when you are on the sidelines than when you are in the seat,” Obama told Colbert during the interview.

Among the questions raised by Colbert during his interview with the 44th President had been the lingering controversies over his use of drones to carry out targeted killings while in office.

“The problem with the drone program was not that it caused an inordinate amount of civilian tragedies, although even one civilian casualty is tragic. But it actually—the drones probably had less collateral damage, which is the antiseptic way of saying it killed people who were innocent, and not just targets—probably had fewer, less collateral damage than if you send in troops, for example, and you’re in a fire fight. Or you’re dropping ordinance, using conventional pilots.”

The first military action involving active warfare authorized by Obama during his presidency occurred on January 23, 2009. Within hours of one another, two drone strikes over Waziristan, Pakistan, resulted in close to twenty civilian casualties; the president had been sworn into office just three days beforehand.

While acknowledging the controversies, Obama told Colbert that he worked to ensure accountability during his time in office and limit the use of drones for targeted killings in military operations.

“The problem is that it starts giving you the illusion that it is not war,” Obama said, adding that “the machinery started becoming too easy.

“I had to actually impose internally a substantial set of reforms in the process,” the former president said, “to step back and remind everyone involved this isn’t target practice.”

Obama called the use of lethal force in such operations “the most profound act that any government can take,” and stated that “there have to be better checks and balances in doing it.”

Obama’s response to Colbert was similar to comments he made during an interview with Ta-Nehisi Coates in 2016, where he noted “the dangers of a form of warfare that is so detached from what is actually happening on the ground.”

Obama also addressed questions from Colbert about Guantanamo Bay, and his frustration with being unable to close the facility during his tenure in office.

“I was surprised that, as commander in chief, I could not shut down a facility that was both unnecessary, and in my view contrary to our legal traditions,” he said.

“No,” Obama replied, “but I will tell you that there were times that I asked for information that it came slower than I wanted.”

“UFOs? Any UFOs?” Colbert asked. “Did you ask about that?”

Obama said he “certainly asked about it.” When Colbert asked for additional details, Obama only elaborated by saying “I can’t tell you.” The former president did, however, add that “it used to be that UFOs and Roswell was the biggest conspiracy. And now that seems so tame, right? The idea that the government might have an alien spaceship? That’s nothing.”

Vague though Obama’s comments were, speculation ensued afterward about what he and other past presidents might have been told during briefings on UFOs.

“Taken literally, former President Obama’s remarks simply mean he asked about UFOs at some point in his presidency,” says Nick Pope, who investigated UFOs for the UK Ministry of Defence.

“He made it sound proactive rather than reactive,” Pope told The Debrief via email, “suggesting that he wasn’t automatically given some sort of UFO briefing, either prior to becoming president, or shortly after inauguration.”

“His response that he can’t tell Colbert what he was told may be serious or may be a tease. We simply don’t know.”

Pope also told us that, “If anyone in the US government is aware of an extraterrestrial presence, my view is that all incoming presidents would be briefed, in line with the ‘culture of no surprises’. Any big strategic issues on which POTUS might have to make instant, impactful decisions would automatically be briefed.”

“One can’t have a situation where the Chairman of the Joint Chiefs says, ‘Mr. President, the situation with the aliens has changed and you need to make some quick decisions’, only for the president to reply, ‘what aliens?’,” Pope said.

Although these were Obama’s most recent statements on the UFO subject, they were not his first. In 2015, Obama similarly advised that he “can’t reveal anything” when late-night host Jimmy Kimmel asked about whether he looked into the subject while in office.

Notably, Obama also became the first U.S. president to publicly mention Area 51, a remote U.S. Air Force facility in the Nevada Test and Training Range where several of the most sophisticated stealth aircraft in existence were developed.

“When you first become president, one of the questions that people ask you is, ‘what’s really going on in Area 51?’” Obama joked during the annual Kennedy Center Honors ceremony in 2013, at which actor Shirley MacLaine was in attendance as one of the year’s award recipients.

“When I wanted to know, I’d call Shirley MacLaine,” Obama said, adding, “I think I just became the first president to ever publicly mention Area 51.”

However, if there are any previous statements Obama has made which really might offer clarity about his position on UFOs, they occurred in November 2015 during an interview with Bill Simmons for GQ.

“I gotta tell you, it’s a little disappointing,” Obama told Simmons when prompted about the JFK assassination, and whether he ever asked for “all the secret stuff.” Obama then shifted the focus to UFOs, and popular ideas about them that have proliferated throughout the last several decades.

“People always ask me about Roswell and the aliens and UFOs, and it turns out the stuff going on that’s top secret isn’t nearly as exciting as you expect,” Obama told Simmons. “In this day and age, it’s not as top secret as you’d think.”

Based on Obama’s comments from over the years, little can really be gleaned about the 44th president’s knowledge of the UFO subject, apart from the fact that he traditionally has so little to say about it. Arguably, his comments to Simmons in 2015 were likely the clearest indication of his positions on the topic; whatever else that might entail, he seems to think it isn’t all that exciting, nor is it, to borrow his words, “as top secret as you’d think.”

“One explanation,” Nick Pope told The Debrief, “is that there isn’t a standard briefing because there’s nothing definitive to brief.” In other words, there may not be any consensus about UFOs and what they might represent, and therefore no “standard briefing” would have necessarily occurred during Obama’s tenure, or during other administrations.

“Nobody really wants to say ‘there’s something going on, but we don’t know exactly what’,” Pope said.

A Promised Land was published on November 17, 2020 by Crown Publishing Group. It is the first in a two-volume series, and more than 1.5 million copies have been sold since its release.