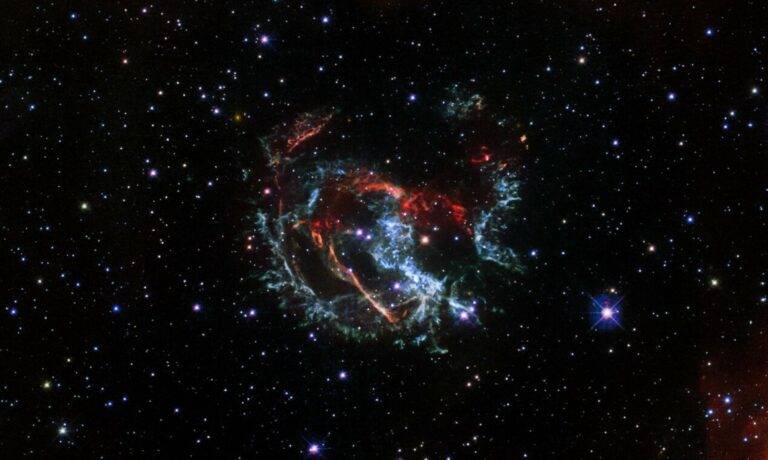 Toward the height of the Cold War, the Soviet Union detonated its Tsar Bomba, the single largest and most devastating nuclear weapon ever constructed. Equivalent to 50 megatons of TNT, the explosion it produced on October 30, 1961–one year prior to the Cuban Missile Crisis–was roughly 1,500 times the strength of the weapons used at Hiroshima and Nagasaki that brought World War II to an end.

This Soviet superweapon produced the largest nuclear bomb explosion that has ever been witnessed, footage of which Russia only recently declassified. Yet despite its magnitude, this Cold War weapons test is far from being the largest explosion ever witnessed by humans.

Supernovas, which occur toward the end of the lifespan of a star, are the largest explosions that occur anywhere in space. Nuclear fusion ensues as these massive objects consume their power source, and once they can no longer sustain themselves, they may collapse into neutron stars, black holes, or be obliterated altogether. Before this occurs, the dying star reaches its peak luminosity, which can produce as much light as an entire galaxy during the weeks, or possibly even months that it remains visible.

Many supernovae have been observed by humans over time, with our earliest observations dating as far back as the end of the first century AD. Of course, our ability to observe these dying stellar beacons has improved greatly since that time, and today astronomers are able to spot and study the remnants of distant supernovae, allowing them to turn back the clock on their demise.

Among the most recent of these observations, the Hubble Space Telescope located the remnant of known supernova called 1E 0102.2-7219, or more simply, E0102. It was created when a star greater than Earth’s Sun exploded around 1700 years ago, during the final days of the Roman Empire. Although it was likely to have been visible to ancient observers from Earth’s Southern Hemisphere at that time, there are no known records that seem to account for such observations.

Located approximately 190,000 light years from our planet, E0102 rests in the Small Magellanic Cloud (also called Nubecula Minor), a dwarf irregular galaxy with a diameter of about 7000 light years, and one of the nearest to our own Milky Way. Among the hundreds of millions of stars it contains, at one time it was also home to the massive dying super sun whose remains astronomers recently glimpsed with the help of the Hubble telescope.

This was not the first time E0102 has been observed by astronomers. Its discovery dates back to the turn of the century when it was initially detected by NASA’s Chandra X-Ray Observatory within months of its launch.

Today, the gaseous remains of this long-dead star—the literal ghost of the supernova that occurred more than a millennium ago—can be observed as they continue to expand through space. Newly released photos obtained by Hubble show these gaseous knots of stellar debris moving in different speeds and directions relative to Earth, at an average speed of around 3.2 million kilometers per hour.

“At that speed, you could travel to the Moon and back in 15 minutes,” wrote ESA/Hubble Chief Communications Officer Bethany Downer in a news release.

After its initial discovery, it was believed that E0102’s supernova would have been visible around 1000 years ago. However, astronomers were able use the recent Hubble data to determine that it occurred nearly 700 years earlier, by studying the speed at which clumps of ejecta visible today are moving.

An international team of researchers were able to identify 22 of the quickest knots of ejecta, which appear to be the least encumbered by their passage through interstellar material. Studying the path and rate of movement of these knots helped the team of astronomers to locate the actual site where the explosion occurred. From there, calculations were made which allowed them to determine that the explosion likely occurred in the early 300s AD.

However, the debris left by this massive ancient explosion was not all the researchers found. A possible neutron star which might have resulted from the blast was also detected, based on data from NASA’s Chandra observations as well as European Southern Observatory’s Very Large Telescope in Chile.

The suspected neutron star is moving some 3 million or more kilometers per hour from the location of the 1700-year-old blast site. Paired with the newly collected data, the research marks one of the many recent instances where Hubble has helped detect new features about the dynamics of galaxies distant from our own.

The research which produced these new findings about E0102 were presented by an international team at the 237thAmerican Astronomical Society virtual meeting earlier this month and will be published in the Astrophysical Journal.