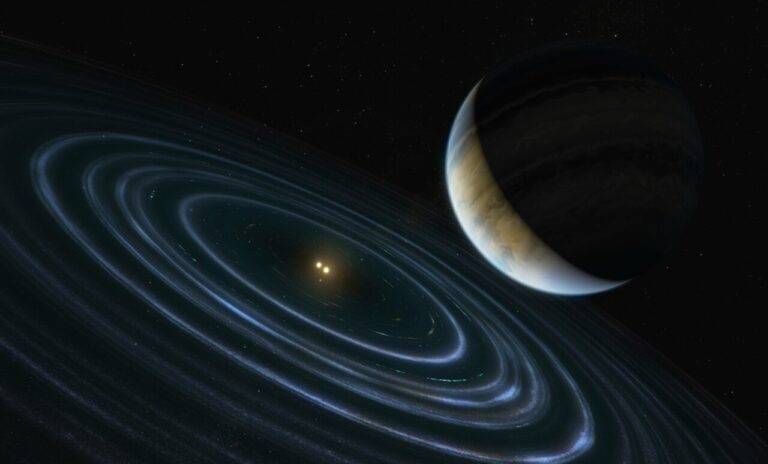 In the outermost reaches of our solar system, far beyond the orbit of Neptune or even that of the dwarf planet Pluto, the presence of an invisible giant has long been suspected.

At a distance nearing 26 times that which separates our Sun and Neptune, this hypothetical planet—if it exists—remains elusive. Searches conducted by Hawaii’s Pan-STARRS array, as well as surveys by NASA’s infrared space telescope, the Wide-field Infrared Survey Explorer (WISE) have turned up empty-handed. Despite this, astronomers have yet to exclude the possibility that a mysterious “Planet Nine” could be out there.

Now, research published in The Astronomical Journal by an international team could lend new insights to the search for this as-yet undetected neighbor, although from an unlikely source: an exoplanet with a peculiar orbit 336 light-years from Earth.

First discovered in 2013, HD106906 b is an exoplanet that was spotted with the Magellan Telescopes located at the Las Campanas Observatory, Chile. Subsequent data collected by the Hubble Space Telescope offered additional information about the distant object, which included precise measurements of its motion.

Because HD106906 b is such a great distance from its pair of host stars, it was difficult for Hubble to obtain information about its 15,000-year-long orbit in the small window of time the exoplanet was observed. The slow speed at which the planet orbits its stars results from the weak gravitational influence they are able to exert on HD106906 b at such a tremendous distance: more than 730 times the space between Earth and the Sun.

As far as what might account for the exoplanet’s unusual position and distance from its host stars, there are a number of theories.

“The explanation that we think is most plausible is the scenario of passing stars stabilizing the orbit of HD 106906 b,” says Meiji Nguyen, the study’s lead author. This stabilization might occurr once an exoplanet like HD 106906 b “is slowly kicked out of the inner planetary region but before it can be ejected from the system entirely,” Nguyen told The Debrief via email.

However, Nguyen points out that there are alternative theories about the planet’s formation and unusual orbit. One involves the notion that the planet formed in situ, meaning that it essentially remained close to where its formation occurred, and has moved little since that time.

“Outside of the potential for slight inward or outward migration, this is how most planets form,” Nguyen told The Debrief, “but it seems like an unlikely scenario for HD 106906 because of how far out the planet is.”

One problem Nguyen points out is the lack of material present in order to account for planetary formation at such a great distance, let alone one as large as HD 106906 b appears to be.

“Stars and stellar systems are formed by gravitationally collapsing clouds of gas,” Nguyen says. “They collapse down into condensed balls of gas which get flattened into disks over time.”

“The issue is that HD 106906 b is entirely external to its host system’s disk, so if it formed in situ, there had to have been enough extraneous material floating around outside the disk that somehow already didn’t get captured by the star, to form an 11 Jupiter mass planet. This scenario doesn’t seem plausible given the mass and distances involved in this system.”

Another scenario involves the notion that HB 106906 b is actually a “rogue planet,” which might have been stolen from another star, or even from interstellar space.

“This is a fun theory because the idea of a lone planet just wandering into the gravitational pull of another star reminds me of the old spaghetti western films,” Nguyen says, “where you would have the lone cowboy wander into a town to fight off the evil bandits or something fanciful like that.”

“Like the in situ formation theory, it’s technically possible but seems highly improbable given the likelihood of the events that would need to happen for this to take placem.”

In addition to the great distance between HD106906 b and its parent stars, which places it far beyond its visible debris disc (comparable to our own solar system’s Kuiper belt), its orbit was found to be highly eccentric and misaligned. The appearance of the exoplanet’s odd orbit is in keeping with expectations for how the orbit of a hypothetical Planet Nine might look.

“We can study the solar system in great detail, yet there are many questions regarding how it formed and evolved,” says Dr. Paul Kalas, Adjunct Professor of Astronomy at the University of California, Berkeley and one of the paper’s coauthors.

One theory about the formation of our solar system involves what is called the Nice Model (named after the location in France of the same name where it was developed). This scenario supposes that our early solar system might have started out with five gas giant planets, which migrated to their current orbital configuration over time.

“It has even been considered that Uranus started out as the outermost planet instead of Neptune,” Kalas told The Debrief in an email, “and then they switched positions as the solar system evolved.”

However, opinions among astronomers remain mixed as to when, or even if such a scenario might have really occurred.

“If Planet Nine really exists, it also poses open questions of how it formed and why it is located far beyond our inner planetary system,” Kalas says.

Kalas likens his team’s observations of HD 106906 b to a time machine, which provides us a glimpse at how our solar system might have looked billions of years ago.

“Our finding that HD 106906 b has an orbit that resembles what is theorized for a Planet Nine in our solar system shows that we don’t have to wait too long for a planet to end up in a distant orbit like Planet Nine. It can all happen within 15 million years.”

Although the existence of Planet Nine remains in question, astronomers have found some evidence that may lend support to the idea. This includes an assembly of small objects beyond Neptune which appear to possess unusual orbits compared with other objects in the Solar System. It is possible that this could be the result of the gravitational influence exerted on them by a larger orbiting body much further out, although some astronomers have proposed that several smaller objects might account for this, rather than a single, giant planet.

With the many questions that remain about our solar system—among them the notion of whether a distant “Planet Nine” may truly exist—the team’s studies of distant HD 106906 b could provide unique insights about how our planetary neighborhood was formed.

“Overall, I think one major impact of our work will be to motivate theorists to develop new models that can explain what we observe in both the HD 106906 planetary system and our own,” Kalas says.

The recent paper, titled “First Detection of Orbital Motion for HD 106906 b: A Wide-separation Exoplanet on a Planet Nine–like Orbit” appeared in the December issue of The Astronomical Journal. The research was led by Meiji Nguyen with contributions from Paul Kalas, both with the University of California, Berkeley, as well as Robert De Rosa of European Southern Observatory in Santiago, Chile.