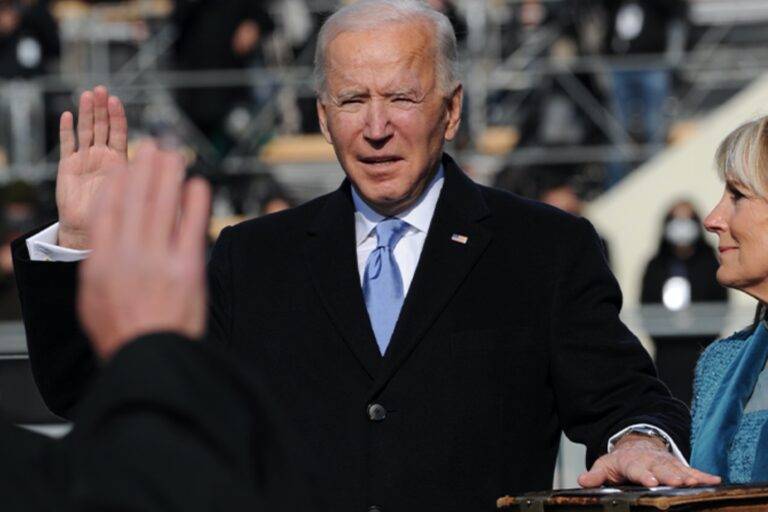 Welcome to this edition of THE INTELLIGENCE BRIEF newsletter. A few items on the menu this week include 1) President Biden’s inauguration, his current cabinet nominees, and how these will relate to defense and foreign policy, and 2) what the new administration’s positions will be regarding unidentified aerial phenomena (UAP). Time to top off our coffee and dive in.

Inauguration Day, and the New DoD

After a tense few weeks in Washington and across the nation, Wednesday morning saw the inauguration of Joseph R. Biden as the 46th President of the United States. The ceremony ensued on the same steps where, only weeks ago, protestors had gathered in droves during an unprecedented siege on the U.S. Capitol Building. Close to 25,000 National Guard members were on hand and prepared to respond in the unlikely event that additional protests occurred.

With the arrival of the new administration, many are looking at Biden’s prospective cabinet appointments, and how the military and foreign policy will take shape in the months ahead under the new Commander in Chief. On Tuesday, Defense One published its updated roster of DoD appointees, the majority of whom are expected to be confirmed by the Senate in the days to come, while in the meantime more than 50 officials in interim positions are currently filling those positions.

Meanwhile, the Pentagon released its own list of new officials sworn-in to the Department of Defense yesterday, many of whom took their oaths virtually due in part to pandemic concerns. A number of individuals did appear in-person, where Washington Headquarters Services Director Thomas Muir oversaw the administration transition procedures.

A statement from the Department of Defense referred to the forthcoming change in administrations as having “a cascading effect within the Defense Department.” It was announced that Deputy Defense Secretary David L. Norquist was officially sworn in as the acting defense secretary “and will serve in the position until the Senate confirms the Biden administration’s nominee for the position.”

Meanwhile, in a separate DoD press release on Tuesday, Biden’s Secretary of Defense nominee Lloyd J. Austin III stressed the future and immediate need for the Pentagon to be able to unify its strategies with the resources at its disposal.

“DOD needs resources to match strategy, a strategy matched to policy, and policy matched to the will of the American people,” Austin said in a hearing before the Senate Armed Services Committee.

As previously reported in The Intelligence Brief, Austin’s nomination will require a waiver from Congress on account of his having only retired from military life within the last four years. Austin’s nomination has been compared with that of James N. Mattis, who served as Secretary January 2017 to January 2019, and also required a waiver from Congress.

“The safety and security of our democracy demands competent civilian control of our armed forces, the subordination of military power to the civil,” Austin stated during Tuesday’s hearing.

“I spent my entire life committed to that principle. In war and peace, I implemented the policies of civilians [who were] elected and appointed over me.”

Austin further stated that, if confirmed by the Senate, he intends “to surround myself with empowered, experienced, capable civilian leaders who will enable healthy civil-military relations grounded in meaningful oversight.”

Austin was previously slated to provide testimony before the House Armed Services Committee, but this has been changed to a closed-door meeting. As reported by Defense News on Tuesday, the previously scheduled hearing, which had been slated for Thursday, would not have allowed time for the new Congress to be named and seated.

Democratic spokesperson Monica Matoush said that “The committee cannot formally organize until leadership from both the majority and minority have named the full list of members. As such, we cannot yet convene our committee organization meeting or formally conduct committee business like a hearing.

“Once members have been named and the committee has been organized, we will proceed.”

A closed-door meeting will likely help ensure Austin’s eventual confirmation, in light of the waiver from Congress that will be required. However, concerns have continued to be raised in recent weeks related to civilian control of the military, and whether Austin’s appointment could be seen as damaging in the public’s eyes in this regard.

Will Biden Confront the “UFO Taboo” While in Office?

With the incoming Biden Administration, another question on many people’s minds has to do with how—or if—the new president will address current efforts by the DoD to resolve questions about unidentified aerial phenomena (UAP), more commonly known as UFOs, and whether they could represent a possible concern for national security.

From Allegation to Legislation: The HAVANA Act of 2021

Earlier this week, The Debrief’s Tim McMillan was joined by Washington Examiner political reporter Tom Rogan, with additional contributions from Douglas D. Johnson and Jed Holtzman, in a lengthy op ed that looked at this question.

“Ultimately, how this plays out will depend much on the attitudes of the incoming Director of National Intelligence (President-elect Biden has named the highly regarded Avril Haines), Secretary of Defense, and other top intelligence and defense appointees,” they wrote. “And it will chiefly depend on the assessment and political courage of the new president, in his responsibility as commander in chief.” The entire piece can be read here.

Certainly, the dynamic in Washington for incoming President Biden—even having the experience in government that he does—is unique on account of the existing efforts in place within government which aim to look seriously at the UAP question. As previously reported by The Debrief, the recent passage of the FY 2021 Intelligence Authorization Act set in motion a 180-day time frame in which the Navy’s UAP Task Force (UAPTF) is to produce a report for the Senate Intelligence Committee on UAP and potential threats they might pose.

“The Department of Defense established the UAPTF to improve its understanding of, and gain insight into, the nature and origins of [unidentified aerial phenomena],” a Pentagon statement from August 2020 read, describing the newly-formed task force’s mission as being “to detect, analyze and catalog UAPs that could potentially pose a threat to U.S. national security.”

Presently, the results of the UAPTF’s forthcoming report, as well as the Biden Administration’s attitude toward the subject and its defense implications, remains to be seen.

That concludes this edition of THE INTELLIGENCE BRIEF. If you came across this on our website and would prefer to have this newsletter sent directly to your inbox, you can subscribe and get email updates from us here, and read past editions of The Intelligence Brief here.