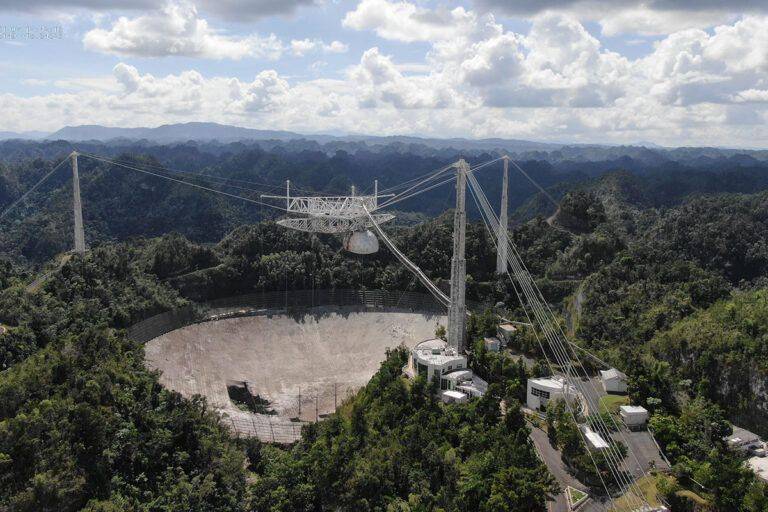 The damage to the telescope from the 6 November cable break is too extensive to repair, the National Science Foundation says. Credit: University of Central Florida/Arecibo Observatory

The radio telescope at Arecibo Telescope and Observatory in Puerto Rico will be demolished after suffering structural damage in August and November of this year. The Arecibo Observatory was the world’s most powerful telescope up until 2016 when it was replaced by China’s Five-hundred-meter Aperture Spherical Radio Telescope (FAST). Though China began allowing international scientists access to FAST in 2019, astronomers and scientists alike view the death of Arecibo as a significant loss to the overall mission of understanding the universe.

BACKGROUND: What is the Arecibo Telescope?

The observatory is composed of two key sections. A 900-tonne six-story structure and platform that houses the world’s most powerful radio telescope transmitter and instruments is suspended by cables above the iconic massive 305-meter dish. Construction finished on the telescope in 1963. The last fifty years have had the telescope beam radio waves at comets, asteroids, and other objects obtaining data and imagery from space. The telescope was responsible for several significant cosmic discoveries including the discovery of several exoplanets, galaxies, and the discovery of ice on Mercury’s polar regions.

In 1974, Arecibo transmitted a message toward Messier 13, a globular cluster of stars approximately 25,000 light-years away. The radio signal was a 1,679-bit pattern that included numbers, chemical formulae, an image of the telescope, and several stick figures. SETI also used the telescope to collect radio signals from deep space in its continued search for extraterrestrial intelligence. The dish was also featured in the 1995 James Bond film, Goldeneye, and the 1997 film, Contact.

“I ran experiments there to understand the nature of galaxies and later to find signals from alien societies with SETI,” Seth Shostak, an astronomer with the Search for Extraterrestrial Intelligence, told The Debrief in an email. “The telescope was also used for pulsar research, radar mapping of asteroids, and, believe it or not, the discovery of the first exoplanet back in 1992.”

ANALYSIS: What Happened to Arecibo?

The National Science Foundation announced on Thursday morning that “a review of engineering assessments that found damage to the Arecibo Observatory cannot be stabilized without risk to construction workers and staff at the facility.” In August, an auxiliary cable failed and fell into the dish below, leaving a 100-foot gash. The University of Florida was prepared to spend a little over 10 million dollars to repair the dish and hire engineers to replace damaged cables. In November, a second cable failed. Engineering teams determined that many of the support cables were suffering from structural issues and would eventually fail. The engineers determined that repairs would be too risky, and it was decided to demolish the telescope.

The National Science Foundation plans to take down the platform and the giant dish in a controlled way, though it is currently unknown how or how much it will cost. The National Science Foundation did state that they hope to continue working at the on-site LIDAR facility and the visitor center. Their offsite facility on the island of Culebra will also remain up and running. The data collected by the main dish will also continue to be analyzed and cataloged.

OUTLOOK: The Arecibo Telescope is Gone. Now What?

China currently has the most powerful radio telescope within its national borders, which, for some scientists, may pose a problem of access. No indication exists yet that politics have become a factor in determining whether a group may have access or not, however, for some scientists, travel to China may not be possible due to political reasons.

New telescopes will be developed and built, but for now, astronomers and scientists are mourning the loss of Arecibo.

“Arecibo was sui generis among radio telescopes, and hearing that it will be demolished was akin to learning that my high school was going to be torn down. The memories will remain, and radio astronomy will shift to newer instruments, but the heavyweight champion is hanging up his gloves,” Shostak stated.