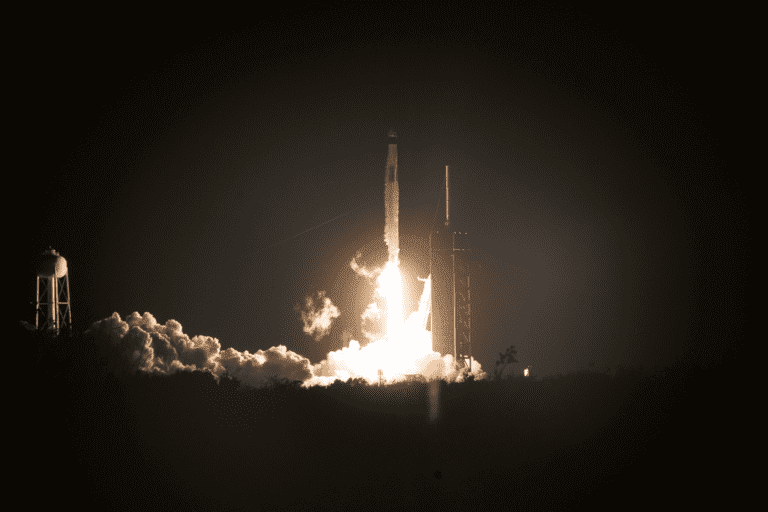 
It marks the launch of the first NASA-certified commercial human spacecraft system.

Space X clinched another victory with the launch of its first operational space taxi flight on Sunday night, placing a crew of astronauts into orbit with a Falcon 9 rocket which lifted off from Kennedy Space Center in Florida.

NASA Administrator Jim Bridenstine called it “a great day for the United States of America and a great day for Japan,” adding that “We look forward to many more years of a great partnership — not just in low-Earth orbit but all the way to the Moon.”

From aboard Resilience, Space X’s Crew-1 Dragon, astronaut Hopkins related that the experience “was one heck of a ride,” as he and the other astronauts headed toward the International Space Station on a six-month mission that marks the first crew rotation flight aboard a commercial spacecraft.

“Making history is definitely hard and you guys all made it look easy,” Hopkins said. “Congratulations to everyone. Resilience is in orbit.”

President-elect Joe Biden called it “a testament to the power of science and what we can accomplish by harnessing our innovation, ingenuity, and determination.”

Congratulations to NASA and SpaceX on today’s launch. It’s a testament to the power of science and what we can accomplish by harnessing our innovation, ingenuity, and determination. I join all Americans and the people of Japan in wishing the astronauts Godspeed on their journey.

“I join all Americans and the people of Japan in wishing the astronauts Godspeed on their journey,” Biden said Sunday night on Twitter.

Vice President Mike Pence, who joined NASA Administrator Jim Bridenstine on Sunday night for the launch, called it the beginning of a “new era in human space exploration in America.”

The historic launch was the second undertaken by SpaceX this year, setting the pace for a new frontier in space exploration with cooperation between NASA and commercial companies, in an arena where Elon Musk is forging a clear path.

Musk was unable to be present at the time of the launch however, disclosing on Sunday that he had likely contracted COVID-19, but that it appears to be a mild case.

All systems were go on Sunday night, the second prospective launch date after its original planned launch on Saturday was postponed. Choppy seas off the Florida coast had prevented liftoff from occurring at the original time of launch.

Other minor technical issues leading up to the time of launch included heater controls on Crew Dragon’s propellant system, which SpaceX engineers were addressing in the hours leading up to launch. According to a statement at NASA’s official blog, flight control operators in Hawthorne, California, had alerted the crew that the control limits required a reset after noticing they were set too tightly. The heaters were confirmed to be working properly after the reset, and performance was optimal during Sunday night’s launch.

On Monday night, Resilience will dock with the forward port of the ISS’s Harmony module. The time for the docking will be around 11 PM Eastern, and will be carried out autonomously as NASA’s official live feed allows viewers to observe. A welcome ceremony is planned for the new arrivals at the orbiting laboratory.