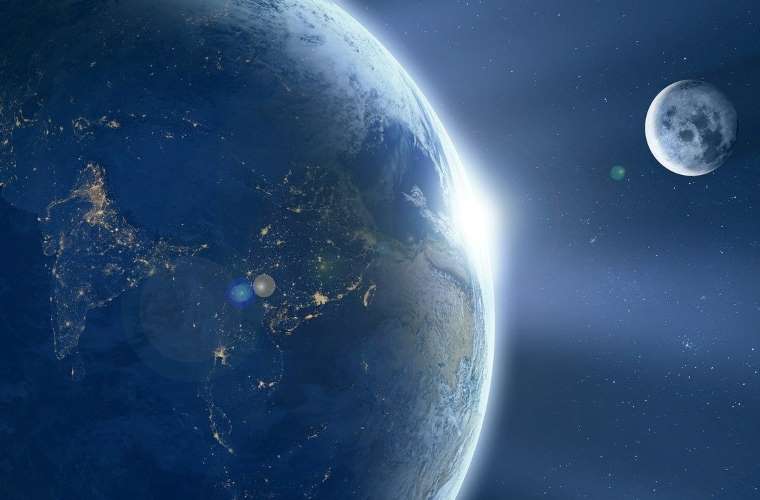 In the Search for E.T., Moon Size Matters

New research indicates that the size of Earth’s moon relative to the size of the planet itself may have been key to the development of life. Furthermore, this ratio may apply to other planetary systems, providing researchers a potential guidepost in the search for extraterrestrial life.

WHAT IS A MOON, AND WHY DOES IT MATTER?

To understand how the Moon affects life on Earth, one must first understand what constitutes a moon. The simplest definition is a space body that orbits a planet. But not all moons are the same. For instance, Venus doesn’t have any moons, whereas Jupiter has at least 80 of them.

Of course, Earth has only the one Moon. And even its origin is still a hotly debated topic. Now, that debate is more critical than ever, with this new research seemingly putting a size limit on both exoplanets and their moons, at least if one is searching for E.T.

“Earth is the only known life-hosting planet and has a number of features unique to our solar system, including active plate tectonics, a strong magnetic field, and a large moon with respect to the size of Earth,” explains the published study. “The presence of the Moon controls the length of the day and ocean tides, which affects the terrestrial biological cycles. The Moon also stabilizes the Earth’s spin axis by at least several degrees. Thus, at least for Earth, the Moon also contributes to Earth’s stable climate and potentially offers an ideal environment for life to develop and evolve.”

In an attempt to determine how the size of a host planet affects the formation of its Moon and how this may affect the planet’s habitability, the researchers behind the study modeled several scenarios for the formation of Earth’s Moon. The most popular is an accretion model, where material ejected from Earth (likely from a massive impact event) creates an accretion disk that slowly but surely forms into the Moon.

However, when the researchers modeled planets around six times larger than Earth, such as the numerous “super-earths” already found outside our solar system, the accretion model for moon formation broke down. In effect, all of the ejected material was either vaporized or fell back into the host planet, resulting in a disk incapable of forming into a moon. As a result, the researchers determined that a smaller planet may be necessary to support E.T.

“Here we propose that an initially vapor-rich Moon-forming disk is not capable of forming a moon that is large with respect to the size of the planet because growing moonlets, which are building blocks of a moon, experience strong gas drag and quickly fall toward the planet,” the study explains. “Our impact simulations show that terrestrial and icy planets that are larger than ~1.3−1.6R⊕ produce entirely vapor disks, which fail to form a fractionally large moon.”

This situation, the study notes, “indicates that (1) our model supports the Moon-formation models that produce vapor-poor disks and (2) rocky and icy exoplanets whose radii are smaller than ~1.6R⊕ are ideal candidates for hosting fractionally large exomoons.”

This ratio is essential, the researchers say, because a moon of a significant fractional size compared to its host planet is necessary for the large-scale effects like plate-tectonics, tides, orbital mechanics, and other effects that help support life on Earth. This type of Moon, they say, is unable to form around planets much larger than Earth.

With the successful launch of the James Webb Telescope, the hunt for life on other planets has shifted into high gear. And based on this latest research, that search should focus on planets closest in size to Earth. Furthermore, although no exo-moons (moons around exoplanets) have yet to be confirmed, once our imaging and analysis of exoplanets become sophisticated enough to make such measurements, finding an Earthlike planet that also has a moon similar in relative size to our own Moon would be an ideal place to start.

“The exoplanet search has typically been focused on planets larger than six earth masses,” said the study’s lead author, Miki Nakajima of the University of Rochester. “We are proposing that instead, we should look at smaller planets because they are probably better candidates to host fractionally large moons.”