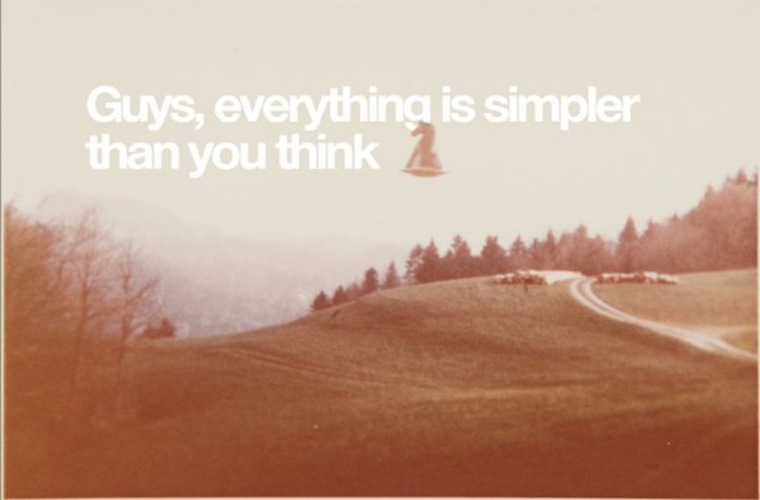 In a cryptic tweet, Russia’s United Aircraft Corporation (UAC) appeared to troll the United States over its renewed interest in UFOs – or as the Department of Defense now terms them, “Unidentified Aerial Phenomena,”- while simultaneously teasing the upcoming reveal of a new Russian fighter jet.

Posted on its Russian language Twitter account on Sunday, July 11, UAC tweeted, “Everything is easier than it seems #ОАК #uac#Ростех #rostec # МАКС2021 #checkmate Something seems to be on the way.”

Accompanying the text was a vintage-colored image of a hilly forested area with a floating knight Chess piece and the words, “Guys, everything is simpler than you think.”

The image used by the UAC is one of the most well-known alleged UFO photos, popularized by the TV show The X-Files and Agent Fox Mulder’s iconic “I Want to Believe” poster.

Thanks to a multitude of reported encounters with “unidentified aerial phenomena” last year, the Department of Defense established a formal “unidentified aerial phenomena task force” (UAPTF). In late June of this year, the Director of National Intelligence’s Office published a 9-page preliminary report on UAP, which found the DoD had no explanation for 143 reported incidents filed in the past few years. Subsequently, the DoD issued a memo detailing additional steps that would be undertaken to better investigate and identify incidents involving UAP.

UAC hasn’t explained its use of iconic UFO imagery in its social media teaser. However, the deliberate play on UFOs, coupled with the saying, “Guys, everything is simpler than you think,” could imply Russia is trolling America’s renewed interest in UFOs or UAP.

Before being made famous by The X-Files, the image used by UAC was first shared by Eduard “Billy” Meier, the Swedish founder of a UFO religion called the “Free Community of Interests for the Border and Spiritual Sciences and Ufological Studies.”

The original image shows a single saucer-shaped aircraft, which according to Meier, he captured as it floated by the rolling hills of Schmidruti, Switzerland, on March 18, 1975.

Meier, a self-described “prophet” who says he’s been in contact with extraterrestrials since he was 5-years old, has shared hundreds of similar photos over the years. Skeptics and UFO enthusiasts alike have characterized Meier as a fraud who used various models to hoax his images of alleged alien spacecraft.

Upon closer examination, UAC’s image appears to be a reasonably crude Photoshop. The bottom half of the “flying saucer” in Meier’s photo is still visible, and the Chess piece simply placed over it.

Rostec posted a countdown timer on its website, set to expire on July 20, along with a short video teaser. The video shows various scenes of the United Arab Emirates, India, Vietnam, and Argentina. Each nation is a notable operator of Russian combat aircraft.

At one point in the video, the shadow of an aircraft can be seen cast over the ocean’s surface. The shadow roughly appears to resemble Russia’s only current 5th generation aircraft, the Sukhoi Su-57. “Rostec will present a fundamentally new military aircraft at MAKS-2021,” reads the video’s title.

Reportedly, the plane is capable of “super-maneuverability and improved takeoff and landing performance, thanks to a thrust vector control engine” and a “thrust-to-weight ratio above 1.”

Another clue that the mystery plane Russia plans to unveil at this year’s International Aviation and Space Salon (MAKS) Airshow in Moscow is a new lighter version of the Su-57, comes from UAC and Rostec’s repeated use of the knight Chess piece in their teasers.

Most aircraft can only generate thrust in the direction in which engine exhaust nozzles are pointed. However, an aircraft equipped with thrust vectoring control can rotate exhaust nozzles, allowing for thrust to be produced in different directions.

Russia has several combat aircraft that make use of thrust vector control for enhanced in-flight maneuverability. The Sukhoi Su-30 is capable of vectoring in two dimensions to change the aircraft’s pitch and roll. The Mikoyan MiG-35, Sukhoi Su-35S, and Su-57 can all vector in three dimensions, allowing the jet’s thrust to alter the aircraft’s pitch, roll, and yaw.

Like the knight in Chess, Russia may be trying to imply that their new fighter jet can strike through unique maneuverability or abrupt “L-shaped” changes in course.

The claimed thrust vectoring control and high maneuverability may also be the impetus behind the UFO theme in UAC’s Twitter image. In addition to extremely high-speed maneuvers, abrupt right-angle turns are often characteristic of claimed UFO or UAP sightings. Equally, Russia may be using the opportunity to jab the U.S. over the UFO craze that’s taken over the Pentagon and the American public in the last several years.

China could be accused of doing the same two years ago, when in June 2019, the People’s Liberation Army Rocket Force tweeted a picture of what looked like a road-mobile intercontinental ballistic missile launcher against a night sky, cryptically saying, “Do you believe in this world there are UFOs?”

China has since recently said that similar to the DoD, the PLA has a task force investigating increased sightings of mysterious airborne objects in Chinese airspace.

Since the UFO topic was catapulted into the limelight in December 2017- thanks to the New York Times reporting an obscure Pentagon program investigating mysterious aerial sightings by military personnel- Russia has offered up a steady diet of tabloid coverage on the topic in its English language news outlets, RT and Sputnik. Yet, in its national media, Russia has been remarkably quiet on the subject.

Just how the Kremlin is viewing all of the UFO news coming out of DoD remains a mystery. The Russian Ministry of Defense’s media affairs office failed to respond to several requests by The Debrief for comment on Russia’s position on UAP.

Of course, any perceived shade Russia might be able to cast on the U.S. could just be an unintended consequence, which the Kremlin will gladly accept.

Regardless, with some analysts reporting Russia is only capable of manufacturing one Su-57 a year and rumors Moscow is failing to disclose significant problems with 5th generation fighter’s flight control system, avionics, and AESA radar, it’s doubtful Russia will be revealing any major game-changing technology on July 20.

Similar to how many felt with the Pentagon’s lack of conclusions in its recent preliminary report on UAP, anyone expecting Russia to unveil some new major aerospace breakthrough on July 20 will likely be disappointed.