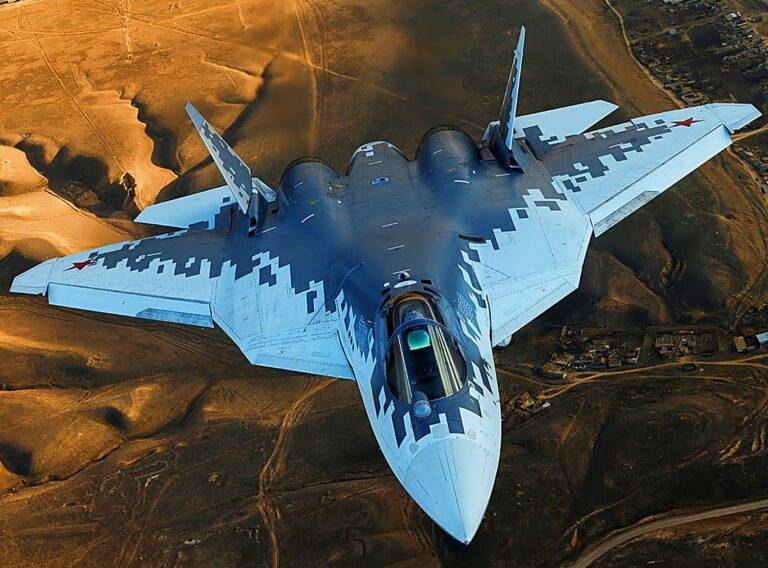 “Su-57 will kill [the F-35] easily, should they meet one on one. The F-35 cannot maneuver, it’s simply incapable,” TASS quoted Major General Magomed Tolboyev as saying.

Fielding the Sukhoi Su-57, Russia’s first fifth-generation stealth fighter, has been a long and bumpy road for the Russian Ministry of Defense.

In 1979, the former Soviet Union outlined the necessity for a next-generation combat aircraft, with hopes of having an operational aircraft by the 1990s. The need for an advanced multi-role combat plane was underscored when the world’s first stealth aircraft, the F-117 Nighthawk, joined the United States Air Force fleet in 1983; however, lack of funding and the 1988 collapse of the Soviet Union caused plans to develop a real stealth fighter to be tabled for over a decade.

In the early 2000s, Russia revitalized plans to field a next-generation multi-role fighter after the U.S. Air Force developed and began conducting its first flight testing of the world’s first fifth-generation advanced stealth jet, the F-22 Raptor. In 2004, the first conceptual designs were approved, and funding for what would become Russia’s Su-57 began the next year.

According to Russian reports, ten development prototypes of Russia’s Su-57 made their first flights between 2010 and 2014. Initially, Russia said the Su-57 would enter service by 2016. In 2018, the Russian Ministry of Defense (MoD) said the Su-57 would begin combat trials, with 12 serial-production models of aircraft ordered and now expected to enter service in 2020.

In early 2018, four of Russia’s Su-57s were spotted at the Russian Khmeimim airbase in Syria. According to Russian state media, the Su-57 “excellently” performed at least ten combat missions in Syria during 2018. Some Western and Russian defense analysts criticized Russia’s decision to deploy the Su-57 prototypes to an active war zone as overly risky, particularly after the Khmeimim base reportedly came under repeated drone attacks.

On December 25, 2019, exactly one year before announcing the stealth jet’s first production run had entered service, state media reported Russia’s Su-57 suffered its first crash in the Khabarovsk Territory. “Due to the failure of the control system, the fighter spontaneously entered a downward spiral [the aircraft was moving along a helical trajectory with a roll and loss of altitude], began to rapidly descend and then fall,” said reports.

The recent announcement of a batch-produced model of Russia’s Su-57, delivered to an unspecified air regiment in the Southern Military District, comes as somewhat of a surprise. Months earlier, in August 2020, Russian Defense Minister Sergei Shoigu said the production variant of Russia’s Su-57 wouldn’t fly until 2028.

In 2011, after 187 planes had entered service, the U.S. halted production of the F-22 Raptor over cost concerns. In 2017, then-Air Force Secretary Heather Wilson told Congress, “the Air Force has no plans to restart the F-22 production line.”

There is no universally accepted definition of what constitutes a fifth-generation fighter. Generally, the term “fifth-generation” refers to an aircraft that employs stealth technology, agile airframes with supercruise performance, advanced avionics, and integrated networking systems for increased command, control, and communication capabilities.

Some defense analysts have expressed skepticism on many of Russia’s claims and cast doubts on whether the Su-57 should be considered a legitimate fifth-generation multi-role fighter.

One of the primary challenges Russia’s Su-57 has faced involves developing the jet’s second-generation Izdeliye 30 engine. In 2019, Vadim Lukashevich, former aircraft engineer for Russia’s JSC Sukhoi and independent aviation expert, said operational models of the Su-57 will not have the intended second-generation engine. Presently, it’s unknown when, or if, Russia’s Izdeliye 30 engine will ever be completed.

Ryan Bauer, defense analyst for RAND Corporation, has expressed doubts on Russia’s claims that the Su-57 has an all azimuth (360 degrees) sensing capability in addition to low-observable features. The F-35 is the only mass-produced aircraft that features an advanced all azimuth sensor suite and low-observable capabilities.

Financing continues to be another significant issue for Russia’s aerospace and defense sector. Russian defense conglomerates have been crippled by Western sanctions and are primarily dependent on borrowing from the Russian banking sector to develop next-generation technologies like the Su-57. The Russian defense industry has repeatedly gone into debt to Russia’s central banks. In early 2020, Russian President Vladimir Putin agreed to write off $11 billion of its defense-industrial complex’s estimated $36 billion in debt.

Russia has also faced severe difficulties in courting co-development or sales of the Su-57 to international partners. India had initially entered a joint development agreement with Russia on the Su-57 in 2007, however India dissolved the agreement in 2018, citing delays in development, disagreements over the transfer of technology, and — notably — Russia’s inability to field a second-generation engine. In 2019, India announced they would be developing their own fifth-generation fighter aircraft. The Chief of Staff of the Indian Air Force made a point of saying, “they do not plan to buy the Su-57.”

In December 2019, Algeria became the only export customer, signing a contract for 12 Su-57 fighters. Many defense analysts believe Russia will not meet Algeria’s 2025 deadline, however, and the deal is doubtful ever to go through. “Despite continued Russian efforts to sell the aircraft, it is unlikely that a fully developed and full production-ready Su-57 will be available for sale before the late 2020s,” says Bauer.

Some defense reporters, such as the War Zone’s Tyler Rogoway, have noted some of the claimed features of Russia’s Su-57 could be impressive, if indeed they ever come to fruition. “On paper at least, no, the Su-57 isn’t ‘junk’ at all,” Rogoway reports.

While calling it a “brilliant plane” that would “easily kill” the F-35 in his interview with TASS, retired Major General Magomed Tolboyev, also seemingly acknowledged Russia’s Su-57 is an inferior multi-role stealth fighter.

“It [F-35] does have electronic might. Today, you no longer fight one-on-one. Everything depends on your support. There is electronic warfare today. This is no longer a sparring tatami, but a complex approach to tactical issues,” said Tolboyev.

Tolboyev, 70, also a Russian cosmonaut, was awarded the title of the “Hero of Russia” and retired in 2000 as Chief Commander of Aviation. In 2004, Tolboyev made headlines after being brutally beaten by Moscow police. According to Russian news, police beat Tolboyev and called him the “N-word” because his surname sounded Chechen. Shortly afterward, Tolboyev said it was “beneath his dignity” to sue or pursue charges against the Russian police.

Ultimately, even if the Federation’s stealth fighter could match the F-35’s advanced situational awareness and low-observable technology, sheer numbers place Russia’s Su-57 at a massive disadvantage.

Over the last decade, Russia has only produced 12 Su-57s (ten prototypes and two production aircraft, of which one crashed). Comparatively, the United States currently has over 600 F-35 variants in service with the Air Force, Navy, and Marines. Current plans call for a total of 2,456 F-35 Lightnings amongst the three branches. The United States Air Force has an additional 187 F-22 Raptors presently in service. A further 13 allied nations already have acquired or have agreements to purchase over 3,000 F-35s through 2035.

After speaking with sources at the Komsomolsk-on-Amur aviation plant and analyzing current production efforts, Global Defense Corporation says Russia is only capable of manufacturing one Su-57 per year right now. Global Defense also claims there are significant problems with Russia’s flight control system, avionics, and AESA radar that Moscow is failing to disclose.

In a peculiar counterpoint to the F-35’s electronic superiority, Tolboyev says, “electronics could be disrupted even by solar flares,” adding, “This is why I oppose everything electronic.”