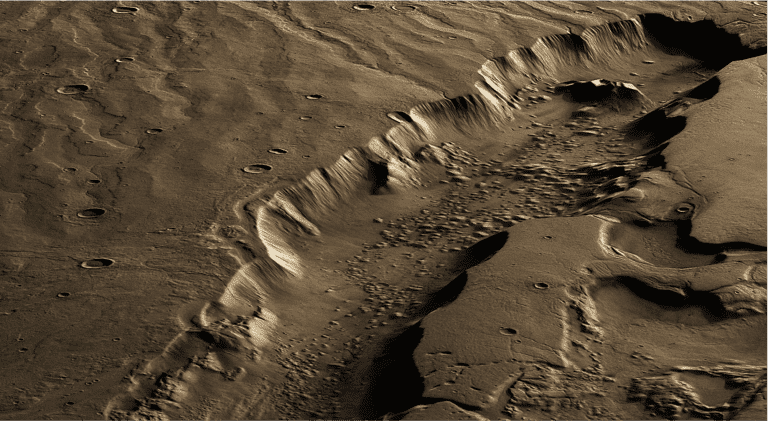 Though David Bowie asked if there was life on Mars in 1971, a new study published in the journal Science Advances concludes that if life ever existed on Mars, it would have to dwell well below the planet’s surface. The scientific team suggests that geothermal energy would generate enough heat to allow water to exist in a liquid state below the surface of the Red Planet.

BACKGROUND: Why Do We Think There May Be Life on Mars?

The Sun is a nuclear fusion reactor generating massive amounts of energy by fusing hydrogen into helium. Over its lifetime, the Sun has gradually become brighter and warmer. However, 4 billion years ago, it was much fainter. The surface of Mars 4 billion years ago would have been frozen; however, significant evidence of abundant liquid water exists at that time. This contradiction has stumped astronomers.

“Even if greenhouse gases like carbon dioxide and water vapor are pumped into the early Martian atmosphere in computer simulations, climate models still struggle to support a long-term warm and wet Mars,” stated lead author Lujendra Ojha, an assistant professor in the Department of Earth and Planetary Sciences in the School of Arts and Sciences at Rutgers University-New Brunswick. “I and my co-authors propose that the faint young sun paradox may be reconciled, at least partly, if Mars had high geothermal heat in its past.”

Mars is rich in uranium, thorium, and potassium. Those elements generate heat via radioactive decay. If enough of those elements were present in the rocky surface of Mars, the ice sheets sitting on top of that surface would warm up enough to possibly melt. Similar reactions occur on Earth, predominantly in the Arctic, where geothermal energy warms up water under the surface, creating underground lakes.

ANALYSIS: The Conditions Needed for Life on Mars

Ojha and the team showed that the conditions required for geothermal energy to create subsurface lakes on Mars is possible. While liquid water would have flowed on the Red Planet’s surface, life would have had a challenging time on the surface. The Martian magnetic field and atmosphere began to dissipate around 4 billion years ago, and the following 500 million years would have brought on drastic climatic shifts. This, and the resulting drop in temperature, eventually made Mars the cold, barren place it is today.

According to the study, while the surface became more inhospitable, liquid water may have been very stable below the surface and provided life a place to hunker down and possibly thrive.

“The faint young sun paradox has been a major problem in the Mars science field, and I hope we have at least provided a partial solution,” Ojha told The Debrief in an email.

OUTLOOK: THe Secret is Water

“Life, IF it ever existed on Mars, may have followed groundwater to great depths,” Ojha stated. “Liquid water on present-day Mars is an extremely controversial topic, and our study can neither verify nor refute its presence on Mars.”

Ohja hopes that NASA’s Mars InSight spacecraft, which landed on Mars in 2018, may allow scientists to better assess and understand the planet’s geothermal processes.

Significant time and energy is being spent in the search for life on other planets in the solar system. Ohja believes that his team’s work will help answer another question that often comes up in the quest for life in the universe; can exoplanets outside their solar system’s goldilocks zone still have conditions that can support life?

“In terms of future outlook: our work shows that liquid water could be generated by geothermal heating on planets that may quite not be in a habitable zone,” Ohja said. “Even if a planet is outside of the goldilocks zone, liquid water generation might be possible via radiogenic heat.”